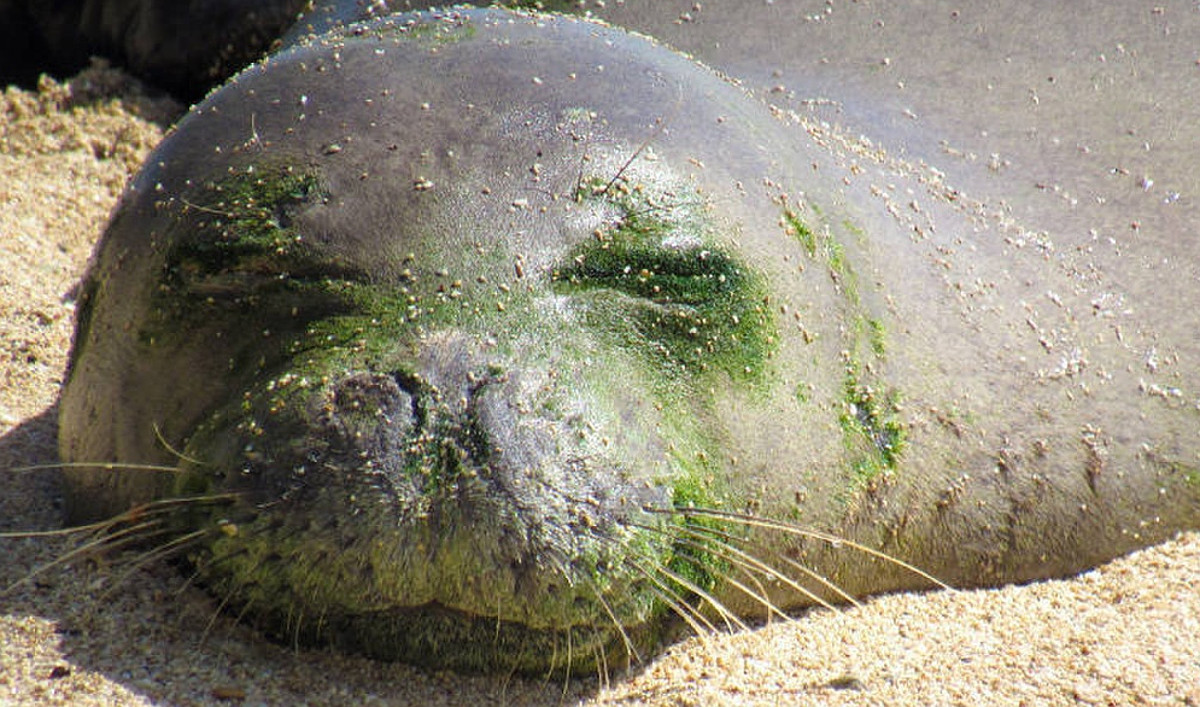 HONOLULU, Hawaiʻi - Pōhaku the monk seal had the help of the USCG, NOAA, and The Marine Mammal Center in Kona. 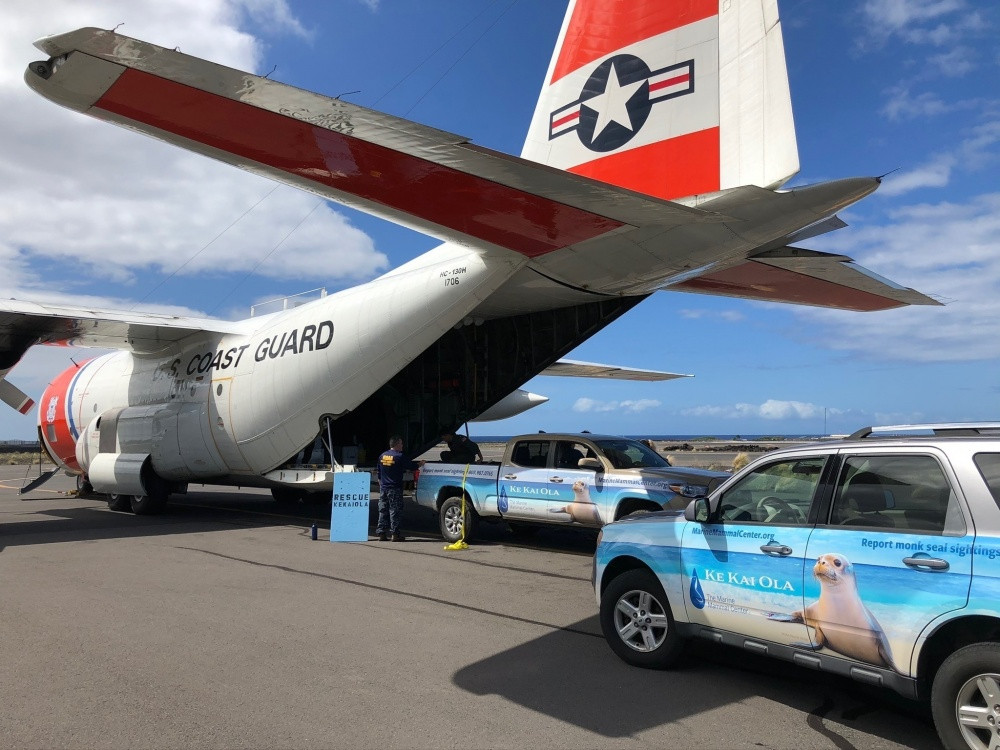 (BIVN) – A monk seal named Pōhaku got a special lift from Oʻahu to Kona aboard a U.S. Coast Guard HC-130 Hercules last week.

From the U.S. Coast Guard 14th District Hawaii and the Pacific:

Personnel from the Coast Guard 14th District, the National Oceanic and Atmospheric Administration, and The Marine Mammal Center partnered to transport a rehabilitated monk seal, Pōhaku, from Oahu to Kona aboard an HC-130 Hercules airplane last week for treatment and rehabilitation.

“Living marine resources is one of our 11 statutory missions and it’s a fulfilling one,” said Maile Norman, marine resource specialist, Coast Guard 14th District. “Protecting the Hawaiian Monk Seal population through our partnership with NOAA provides significant benefits to national stewardship programs and provides the Coast Guard a unique opportunity to play a part in the recovery of this critically endangered species.”

This 13-year collaboration yielded the successful rehabilitation and release of more than 50 Hawaiian monk seals across the archipelago, including the remote and uninhabited Northwestern Hawaii Islands. The Coast Guard transports six marine mammals on average each year in conjunction with other missions such as necessary training flights.

“NOAA Pacific Islands Regional Office and the Coast Guard have a memorandum of understanding to assist NOAA in seal transports like this when the Coast Guard resources are available. These missions are usually flown in conjunction with training as they fall outside of Search and Rescue and Homeland Security missions”, said David Schofield, NOAA Regional Marine Mammal Response Coordinator. “NOAA is very grateful for the role the Coast Guard plays in monk seal response and conservation. We could not care for seals like Pōhaku if we did not have the resources, professionalism, and skills the Coast Guard brings to the table.”

This adult female seal was rescued by federal wildlife officials in January near Ko Olina. She has been diagnosed and is being treated for toxoplasmosis, a disease that results from infection with the Toxoplasma gondii parasite, one of the world’s most common parasites. Pōhaku was taken to the Marine Mammal Center’s Ke Kai Ola monk seal rehabilitation facility on Hawaii Island for the long-term care she needs.

“As the only partner organization permitted by NOAA to treat and rehabilitate endangered Hawaiian monk seals, we’re proud to support patients like Pōhaku at our state-of-the-art facility in Kona,” said Megan McGinnis, The Marine Mammal Center’s Animal Care Program Manager at Ke Kai Ola. “We are grateful to the U.S. Coast Guard, who reacted quickly to handle this unique situation and helped our experts give this animal a second chance at life.” 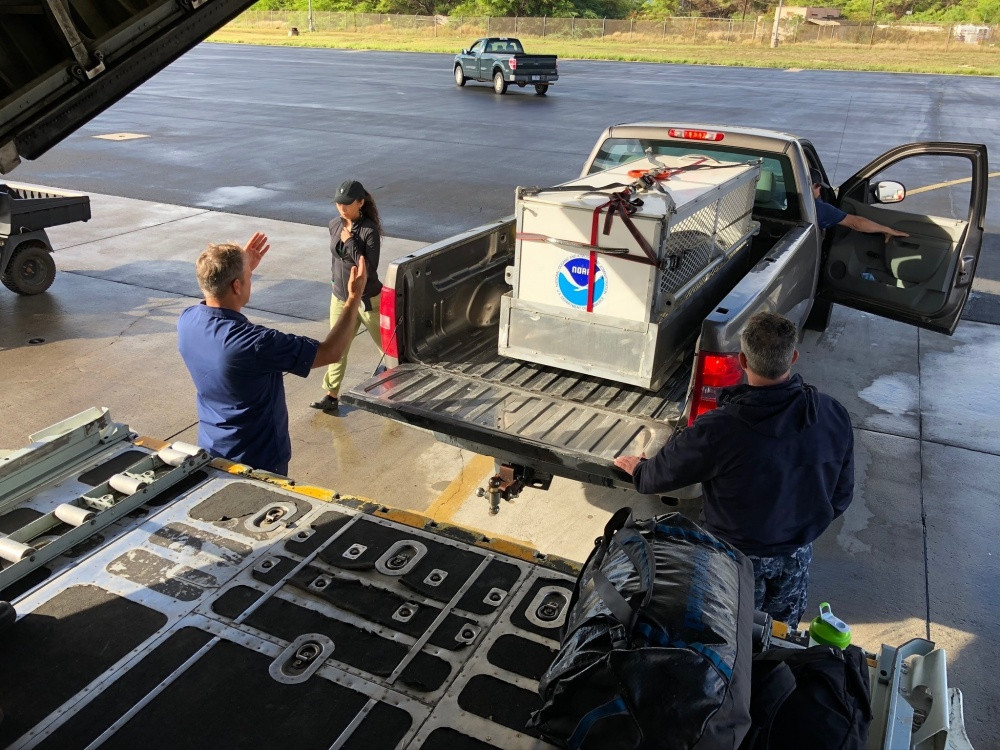 To report monk seal sightings on Hawaiʻi Island, you can email NOAA at pifsc.monksealsighting@noaa.gov or call the Big Island’s Marine Mammal Response Coordinator at (808) 987-0765.