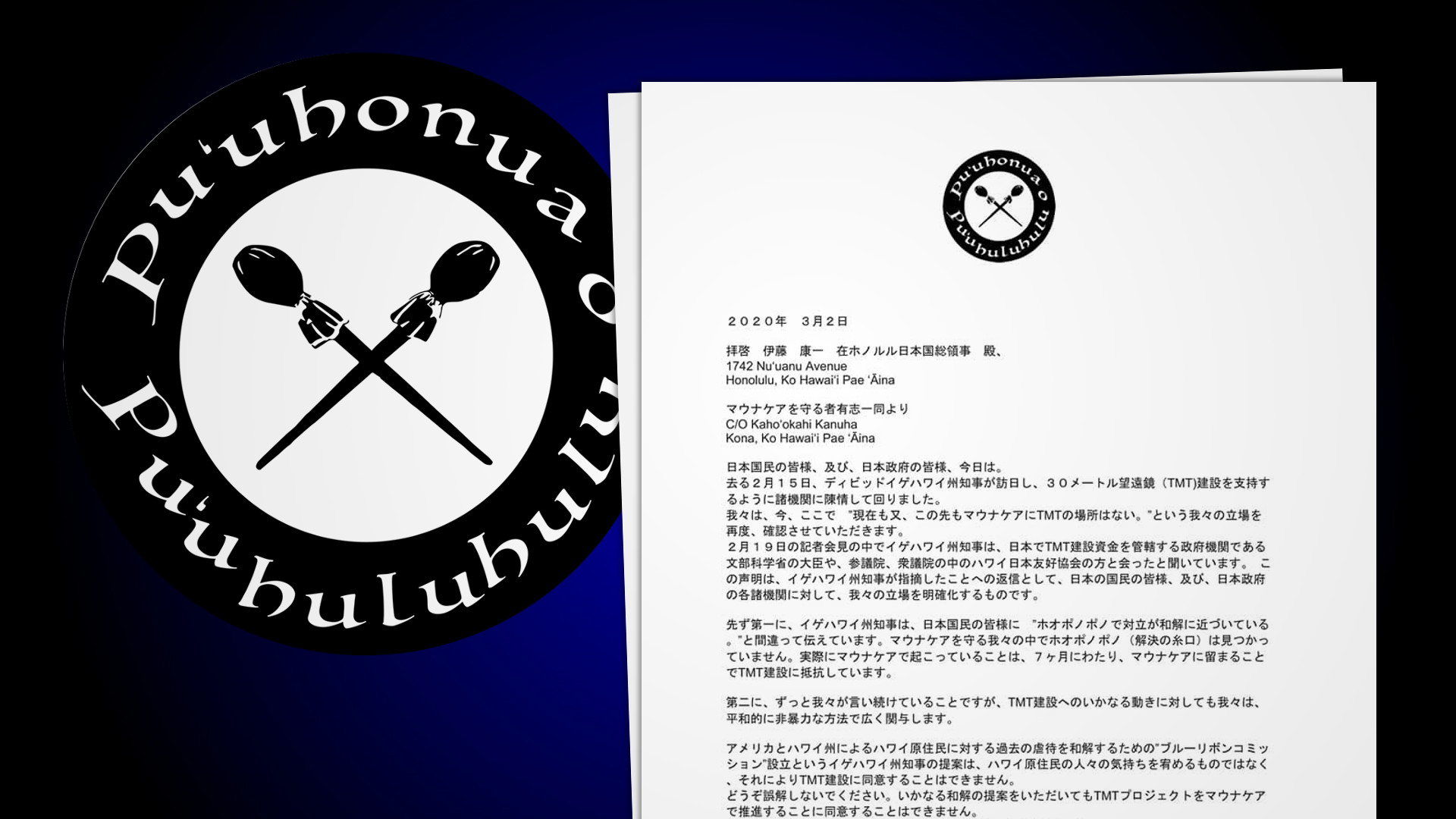 HONOLULU - TMT opponents say there is no hoʻoponopono process taking place with Maunakea kiaʻi, and requested that Japan withdraw support for the planned observatory.

(BIVN) – On Monday, the kiaʻi opposed to the building of the Thirty Meter Telescope on Maunakea delivered a letter to the Japanese Consulate on Oʻahu, asking that Japan withdraw all support for the observatory project and claiming that Governor Ige made misrepresentations to Japanese officials during a recent trip to their country.

The group of TMT opponents recorded their interaction with a representative of the Consul General of Japan outside the gates, and also held a press conference at the location. Kahoʻokahi Kanuha, whose name is listed as the contact on the Puʻuhonua o Puʻuhuluhulu letter to Japan, did most of the talking.

The letter follows Governor David Ige’s visit to Japan during which he spoke to key stakeholders of the Thirty Meter Telescope. Governor Ige later told media that he “talked about hoʻoponopono sessions that are being engaged in,” and a “reconciliation commission” that he said he will be forming “to look into the broader issues of reconciliation with the Native Hawaiian people, the State of Hawaiʻi, and the United States of America, so that we can develop a road map of reconciliation on the issue.”

However, the kiaʻi in their letter to Japan said “there is no hoʻoponopono process taking place with Maunakea kiaʻi”, and said the governor’s reconciliation commission “is nothing more than an attempt to pacify the Hawaiian people and secure our consent to the TMT project.”

While TMT said it had no immediate plans to start construction (Hawaiʻi officials said least until after February), both the kiaʻi and law enforcement have agreed to stand down on the Mauna Kea Access Road, for the time being, so that the road may be open.

The full text of the letter (shared on social media in both English and Japanese) reads:

To the people and government of Japan – aloha nui nō kākou,

On February 15th, Governor David Ige travelled to Japan in part to lobby Japanese institutions to support the construction of the Thirty Meter Telescope (TMT) on Maunakea. We are here today to restate and reaffirm our position that the TMT has no place on Maunakea. Not now, not ever. In his February 19th press conference, Governor Ige shared that he met with the Ministry of Education, Science and Technology, the Japanese federal agency responsible for funding the TMT, as well as the Hawai‘i Japan Friendship Association in both the House of Councilors and House of Representatives. This statement is intended as a response to Governor Ige’s points and to provide our own clarification to the people and governing institutions of Japan.

First, Governor Ige misrepresented to the Japanese people that ho‘oponopono (conflict resolution) is occurring. There is no hoʻoponopono process taking place with Maunakea kiaʻi (protectors). What is taking place is mass resistance against the TMT in the form of a seven-month occupation on Maunakea.

Second, it has also been our consistent message that any attempt to construct TMT will be met by widespread and committed peaceful non-violent resistance. The Governor’s proposal to establish a “Blue Ribbon Commission” to address reconciliation for the U.S. and State of Hawaiʻi’s past mistreatment of Native Hawaiians is nothing more than an attempt to pacify the Hawaiian people and secure our consent to the TMT project. Please do not be misled. No attempt at reconciliation will result in our consent to the TMT project on Maunakea.

Our message to the people and government of Japan is:

1. The Kanaka Maoli protectors of Maunakea, with the support of our allies in Hawaiʻi and around the world, do not consent to the construction of the massive Thirty Meter Telescope on Maunakea.

2. Maunakea is the most sacred and revered mountain to Kanaka Maoli, similar to the reverence your country and people have for Mount Fuji.

3. Building the TMT on Maunakea would be a dishonorable act that would inflict serious harm upon Kanaka Maoli (Hawaiian people) and our national lands that were illegally seized by the U.S. in 1893. To ignore Kanaka Maoli and continue to pursue construction of the Thirty Meter Telescope disregards the irreparable harm the TMT’s construction would cause to Kanaka Maoli by violating our traditional land rights, religious and cultural practices and desecrating our most revered mountain.

In consideration of all the above, we respectfully demand that Japan withdraw all support for the proposed construction of the Thirty Meter Telescope on Maunakea. By doing so, the government and people of Japan will prevent further intrusion, desecration and destruction upon the sacred lands of Maunakea. In halting the pursuit to build the TMT on Maunakea, Japan will avoid violations of international law and human rights injustices against Kanaka Maoli. Taking affirmative and decisive action to respect Kanaka Maoli now will restore the peace and friendship established between Japan and Hawai‘i nearly 150 years ago with the signing of the treaty between King David Kalakaua of the Hawaiian Islands and Emperor Meijei of Japan in 1871. We ask you to join us today to protect

The Protectors of Maunakea