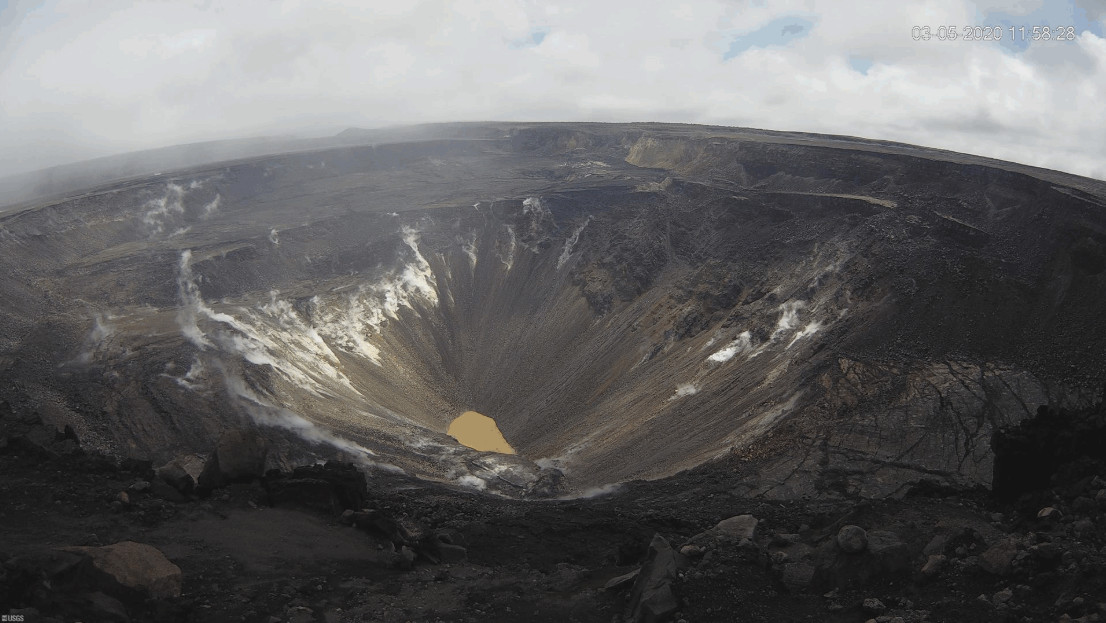 HAWAIʻI ISLAND - Kīlauea is not erupting and there have been no significant changes in volcanic activity in February, scientists say.

Comparison of the water pond in Halema‘uma‘u on November 20, 2019, and March 1, 2020. Camera and lens same for both photos. Since November 20, 2019, the pond deepened 10 m (33 ft) and widened more than 50 m (164 ft) east-west and 30 m (98 ft) north-south. Circled clusters of rocks did not move between photos, evidence of slope stability. The water’s color browned with time, though the photos probably exaggerate the color difference. The blue-green water at the far and near ends of the pond is interpreted as groundwater entering the pond. USGS photos by D. Swanson.

Kīlauea is not erupting, and the scientists say monitoring data for the month of February “show variable but typical rates of seismicity and ground deformation, low rates of sulfur dioxide emissions, and only minor geologic changes since the end of eruptive activity in September 2018.”

Here is the full text from their observations:

Monitoring data have shown no significant changes in volcanic activity in February.

Rates of seismicity over the month were variable but within a range observed over the past year. Sulfur dioxide emission rates are low at the summit and are below detection limits at Puʻu ʻŌʻō and the lower East Rift Zone. The water pond at the bottom of Halema’uma’u continues to slowly expand and deepen. As of early March, pond dimensions are approximately 100 meters (330 feet) by 200 meters (660 feet). The current depth is approximately 28 meters or 92 feet.

Over the past month, the summit tiltmeter recorded about 9 deflation-inflation events, a number similar to January. Since March 2019, GPS stations and tiltmeters at the Kīlauea summit have recorded deformation consistent with slow magma accumulation within the shallow portion of the Kīlauea summit magma system (1-2 km or approximately 1 mile below ground level). Gas measurements show continuing low levels of sulfur dioxide emission from the Halema’uma’u area, consistent with no significant shallowing of magma. Some amount of sulfur dioxide is being dissolved into the summit lake and work continues to try and quantify this process. The pond was last sampled by UAS in January and additional, regular sampling with UAS is planned. 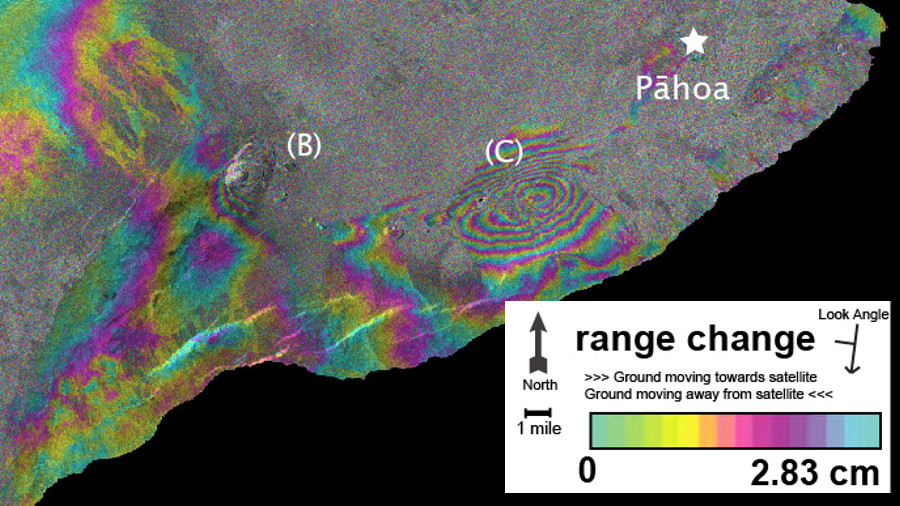 Data from the European Space Agency (ESA) Sentinel-1A and Sentinel-1B satellites on March 31, 2019, and January 31, 2020, produced this interferogram. Each fringe, or band of colors, represents 2.83 cm (1.1 inches) of range change—the distance between the satellite and the ground. Counting fringes gives the total range change between two satellite passes. Fringes near point (B) at the summit of Kīlauea reflect inflation of the shallow Halema‘uma‘u magma chamber. This inflation has been observed since mid-March 2019, with a total range change of approximately 40 cm (15.7 in). Point (C) is on the middle East Rift Zone near Pu‘u ‘Ō‘ō. Interferograms and GPS data show that inflation has slowly shifted toward Pu‘u ‘Ō‘ō in recent months, during which the range change has been about 17 cm (6.7 in). (inset from USGS HVO photo)

Farther east, GPS stations and tiltmeters continue to show motions consistent with slowed refilling of the deep East Rift Zone magmatic reservoir in the broad region between Puʻu ʻŌʻō and Highway 130. During February, deformation rates in this region have decreased slightly. Monitoring data do not suggest any imminent change in volcanic hazard for this area. The south flank of Kīlauea continues to creep seaward at elevated rates following the May 4, 2018 M6.9 earthquake near Kalapana. HVO continues to carefully monitor all data streams along the Kīlauea East Rift Zone and south flank for important changes. 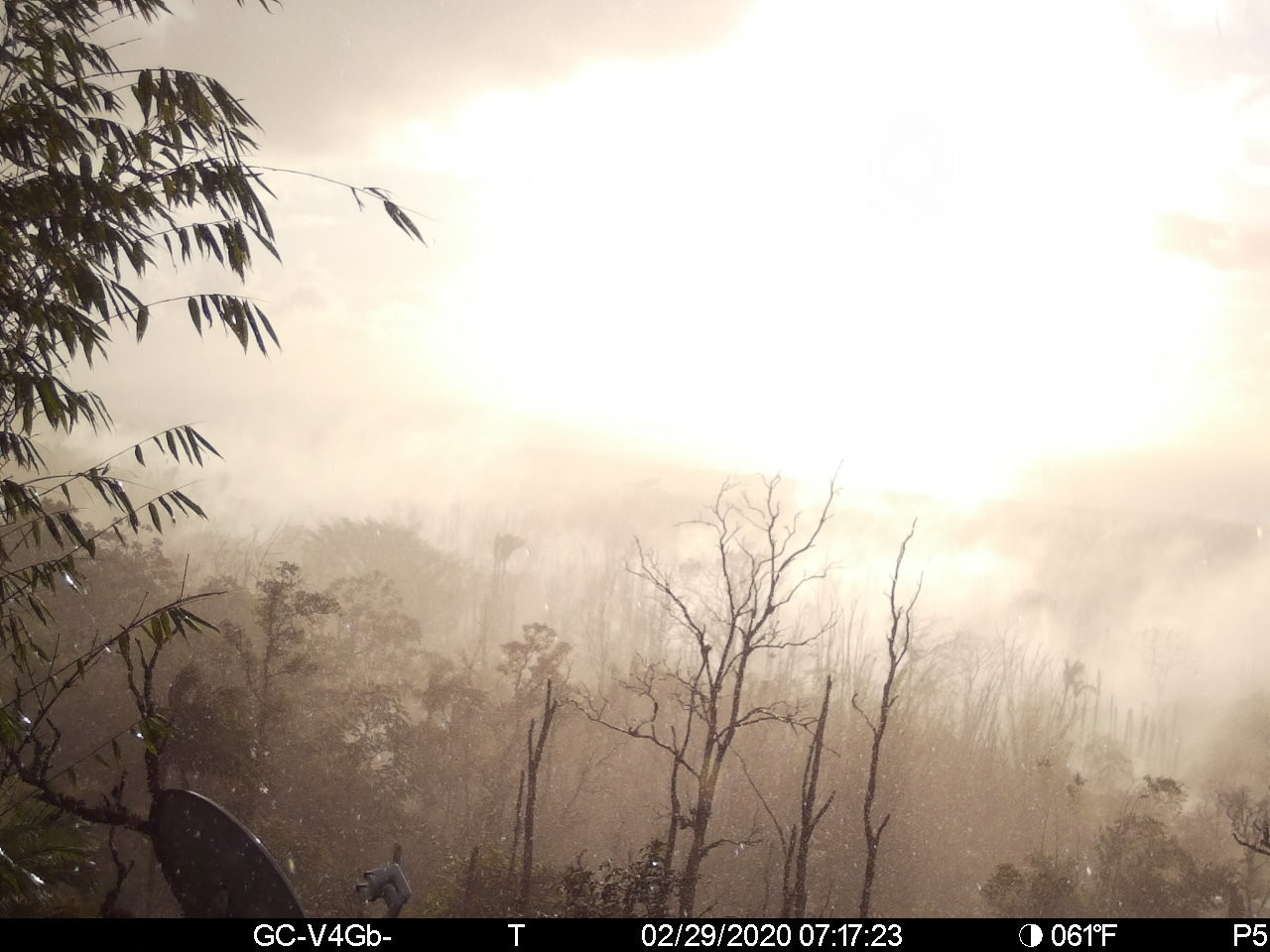 Background Since June 25 2019, Kīlauea Volcano has been at NORMAL/GREEN. For definitions of USGS Volcano Alert Levels and Aviation Color Codes, see this page. Kīlauea remains an active volcano, and it will erupt again. Although we expect clear signs prior to the next eruption, the time frame of warning may be short. Island of Hawaiʻi residents should be familiar with the long-term hazard map for Kīlauea Volcano and should stay informed about Kīlauea activity.