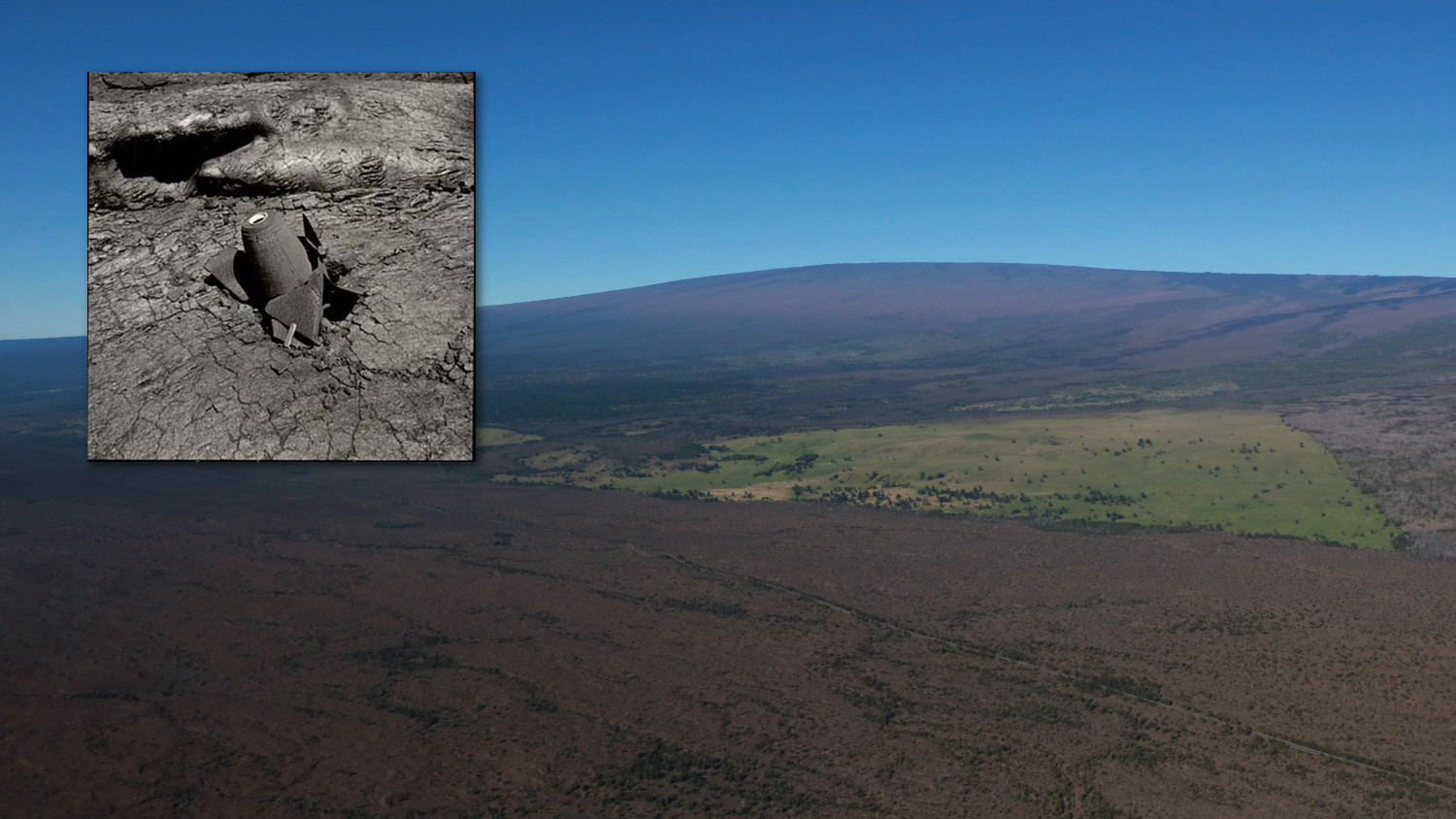 HAWAIʻI ISLAND - The USGS Hawaiian Volcano Observatory has published the first part of a series in response to recent reports of bombs found on Mauna Loa. 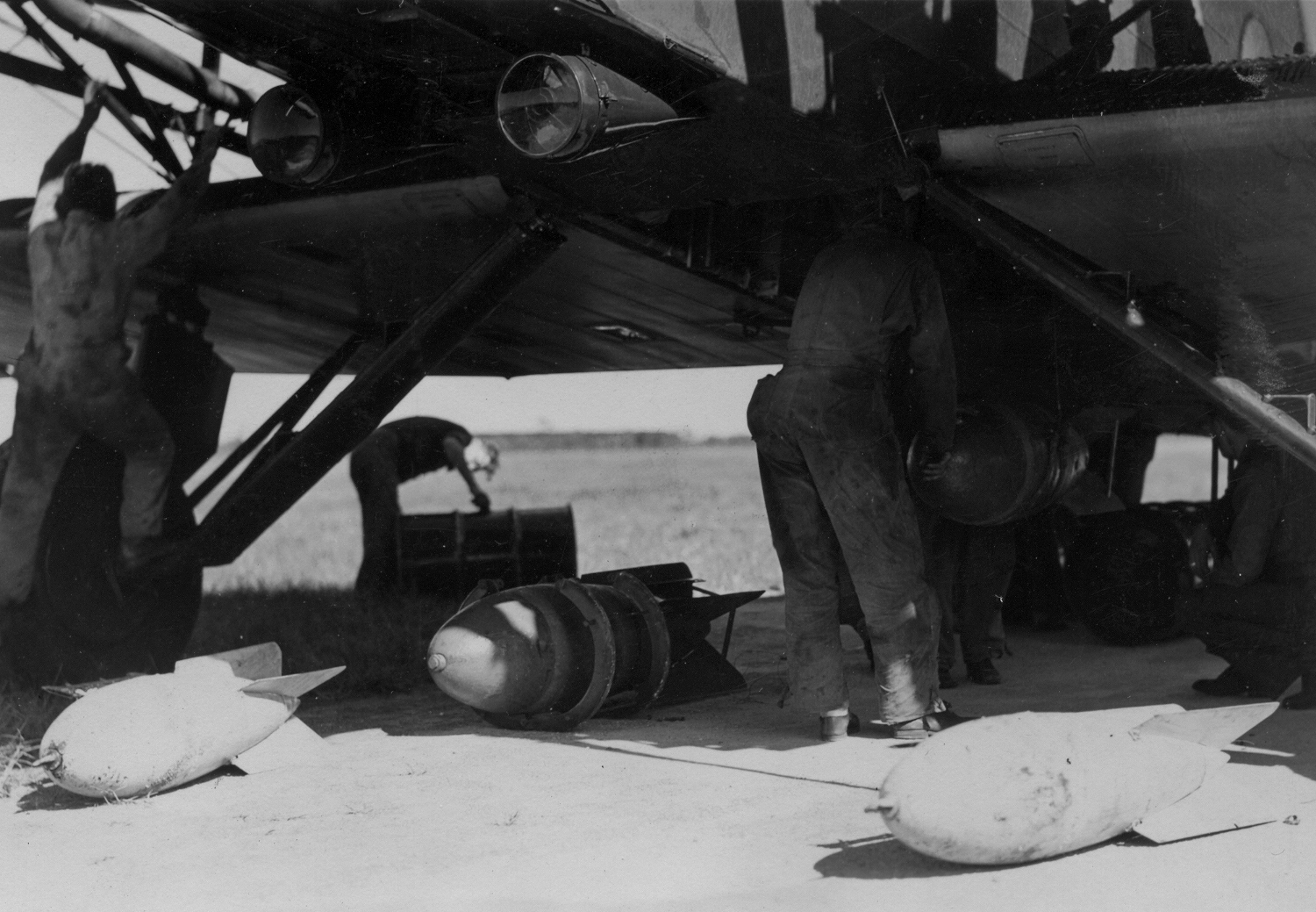 An Army Air Corp biplane is prepared for a mission to drop bombs on a lava flow advancing toward Hilo during the Mauna Loa 1935 eruption. Below the plane is one of 20 demolition bombs (center) dropped in an attempt to disrupt and redirect the Humuʻula lava flow, and two of the 20 “pointer bombs” (left and right) that were used for aiming purposes. Photo by Kenichi Maehara, 1935.

In late February 2020, Hawaii media reported on the recent discovery of two bombs on the north flank of Mauna Loa, but details were lacking. Today, we offer more info.

The two bombs were part of a cluster dropped by U.S. Army Air Corp planes on the Humuʻula lava flow on December 27, 1935. According to a 1980 study by now-retired USGS Hawaiian Volcano Observatory (HVO) geologist Jack Lockwood and F.A. Torgerson (U.S. Air Force), 20 of them were 275 kg (600 lb) MK I demolition bombs, each loaded with 161 kg (355 lb) of TNT and armed with a 0.1 second time-delay fuse. The other 20 were “pointer bombs” (for aiming purposes) that contained only small black powder charges.

The device featured in recent media reports is one of the pointer bombs. Dr. Thomas A. Jaggar, HVO’s founder, first described this bomb during a 1939 post-eruption inspection of the area: “… a winged bomb had plunged through a thin crust into liquid lava and was intact, its nose exposed protruding down into a tunnel below.” He also found one of the demolition bombs, unexploded with several hundred pounds of TNT exposed, which was safely detonated.

The same pointer bomb was found and photographed in 1977 by Lockwood. His photo was published in his 1980 paper with the caption, “‘Pointer bomb’ that penetrated 1935 pahoehoe flow alongside channel.”

Events leading up to bombs penetrating the thin pāhoehoe crust of the active 1935 Humuʻula lava flow are well known to volcanologists as the first test of using explosives to stall or divert a lava flow in Hawaiʻi.
Destroying a lava conduit to redirect a flow is one of three basic diversion tactics. However, lava diversion is the subject of great debate in Hawaiʻi, with concerns about the success of influencing a lava flow’s progress and whether humans should interfere with natural processes and Pele.

The first known use of this strategy was by a group of concerned citizens from Catania, Sicily, in 1669, when a large lava flow from Mount Etna threatened their town. Protected from the heat by cowhides, they used common digging tools to break open the lava conduit that fed the threatening flow, releasing lava into a new path away from Catania.

The effort was briefly successful until citizens of nearby Paterno realized that the diverted flow could reach their own city and chased off the Catanians. The hole in the conduit then sealed and the flow toward Catania resumed, ultimately reaching the city and the Ionian Sea.

In Hawaiʻi, the use of dynamite to disrupt a lava flow was planned, but not tried, in 1881 when a Mauna Loa eruption threatened Hilo. The use of explosives was discussed again in 1929, when residents feared that an earthquake swarm on Hualālai might lead to an eruption of that volcano, but none occurred. The next opportunity came a few years later.

Following a Mauna Loa summit eruption in 1933, Jaggar predicted that a flank eruption would occur on the volcano within two years and might threaten Hilo. His prediction came true – Mauna Loa erupted in late November 1935.

During the first week, the flow moved from the volcano’s Northeast Rift Zone down its north flank and turned west, away from Hilo. But on November 27, a new vent opened lower on the north flank and erupted a lava flow that went north to the base of Mauna Kea, where it ponded.

A month after the 1935 eruption began, the lava pond at the base of Mauna Kea breached, sending a flow toward Hilo. This lava flow advanced at an alarming rate of 1.6 km (1 mi) per day.

For the previous two years, Jaggar had talked about using explosives to disrupt a lava flow that might threaten Hilo. He envisioned a land expedition carrying TNT to near the vent. But Jaggar’s friend, sugar chemist Guido Giacometti, suggested that Army planes might be able to drop explosive bombs more quickly and accurately.

So, Jaggar requested Army Air Corp assistance, which was quickly granted. On December 27, 1935, ten Keystone B-3 and B-4 biplane bombers delivered 40 bombs to two target areas on the Humuʻula lava flow, both within 2 km (1.2 mi) of the Mauna Loa vent.

Did these efforts work? Next week’s Volcano Watch will lay out evidence for their success or failure.