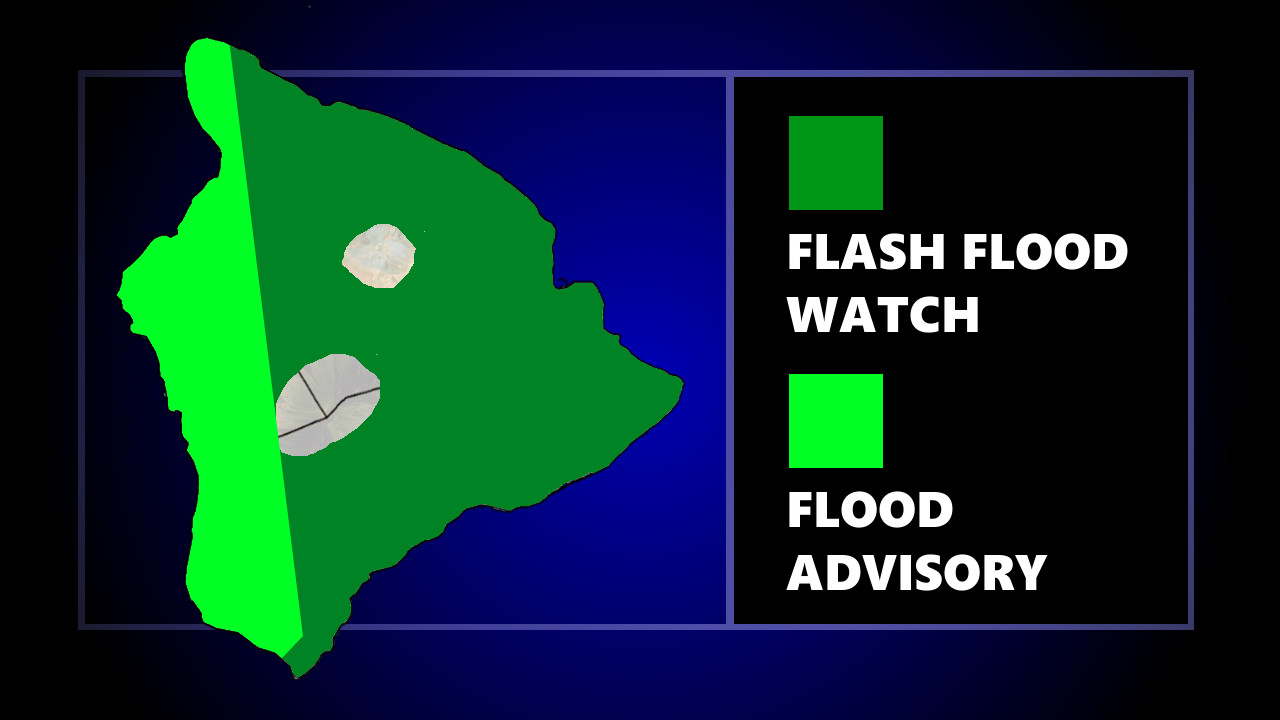 HAWAIʻI ISLAND - A Flash Flood Watch has been in effect for all of Hawaiʻi Island throughout the day as a kona low west of the state continues to produce bands of heavy rain and thunderstorms.

(BIVN) – The National Weather Service in Honolulu has issued a Flood Advisory for leeward areas on the island of Hawaiʻi until 9:30 p.m. HST, while a Flash Flood Watch continues to be in effect for the entire island.

“Showers will move northeast at 15 mph, and will bring localized flooding and very low visibility,” the National Weather Service stated. “Showers are also expected to increase in coverage and intensity over the leeward Kohala District later this evening.”

The Big Island has been under a Flash Flood Watch all day, as a kona low west of the state continues to produce bands of heavy rain and thunderstorms across portions of the island chain. Kauai and Oahu have been getting especially soaked.

Due to the Flood Advisory, Hawaiʻi County Civil Defense says the following are issued:

Just before 4 p.m., the National Weather Service provided this information in a lengthy discussion:

A deep kona low centered nearly 600 miles west of Kauai will continue to dominate Hawaiian weather for the next few days, and a Flash Flood Watch remains in effect for the entire state. A deep convergence band associated with the low dropped 4 to 7 inches of rain over much of Kauai (with localized sites measured 10 inches) last night and early today before weakening and moving eastward to Oahu around mid day. The band also produced strong to severe thunderstorms around the Garden Isle this morning and continues to generate some strong thunderstorms around Maui County, where a Severe Thunderstorm Watch remains in place through 500 PM. Besides flooding, the main threat posed by the thunderstorms are strong wind gusts. Expect continued wet conditions over the central islands this afternoon with the greatest potential for heavy showers across Maui County. While Kauai is in a bit of a lull in shower activity, additional thunderstorms are redeveloping to the distant southwest and approaching. Over on the Big Island, showers will persist along southeast slopes, while a few thunderstorms may flare across leeward areas through the afternoon.

Wet, unsettled, and locally breezy conditions will hold tonight. As the center of the kona low remains more or less stationary, the GFS and ECMWF show a broad area of convergence shifting back over the western half of the island chain, maintaining the greatest flood risk over saturated grounds of Kauai and Oahu. Over the rest of the state, a flood risk will continue. The most persistent rainfall should be across southeast facing slopes, but a heavy shower or thunderstorm could flare up anywhere and produce flash flooding. Snow showers are possible on the summits of the Big Island above 12,000 ft.

The flood threat will persist through at least Wednesday, and the Flash Flood Watch has been extended. The GFS and ECMWF show that the center of the kona low will remain stalled. It is not unusual for these features, which are cutoff from the jet stream and any significant steering flow, to meander in place for days. As a result, moist and unstable could remain in place for much of the state, though the western end of the island chain would likely be at greatest risk for a continued flood threat. The GFS is also hinting at an increase in mid level moisture that could produce snow over the high summits of the Big Island.

The low will weaken and lift slowly northward on Thursday and Friday, causing the flood threat to diminish from east to west. The main area of convergence associated with the low will likely retreat just west of the state, but lingering enhanced low level moisture and instability could maintain a threat of heavy showers and thunderstorms over the western end of the state. Across the eastern end of the state, available moisture in the east to southeast flow will be diminished, though showers will persist across windward areas and afternoon thunderstorms will be possible over the interior.