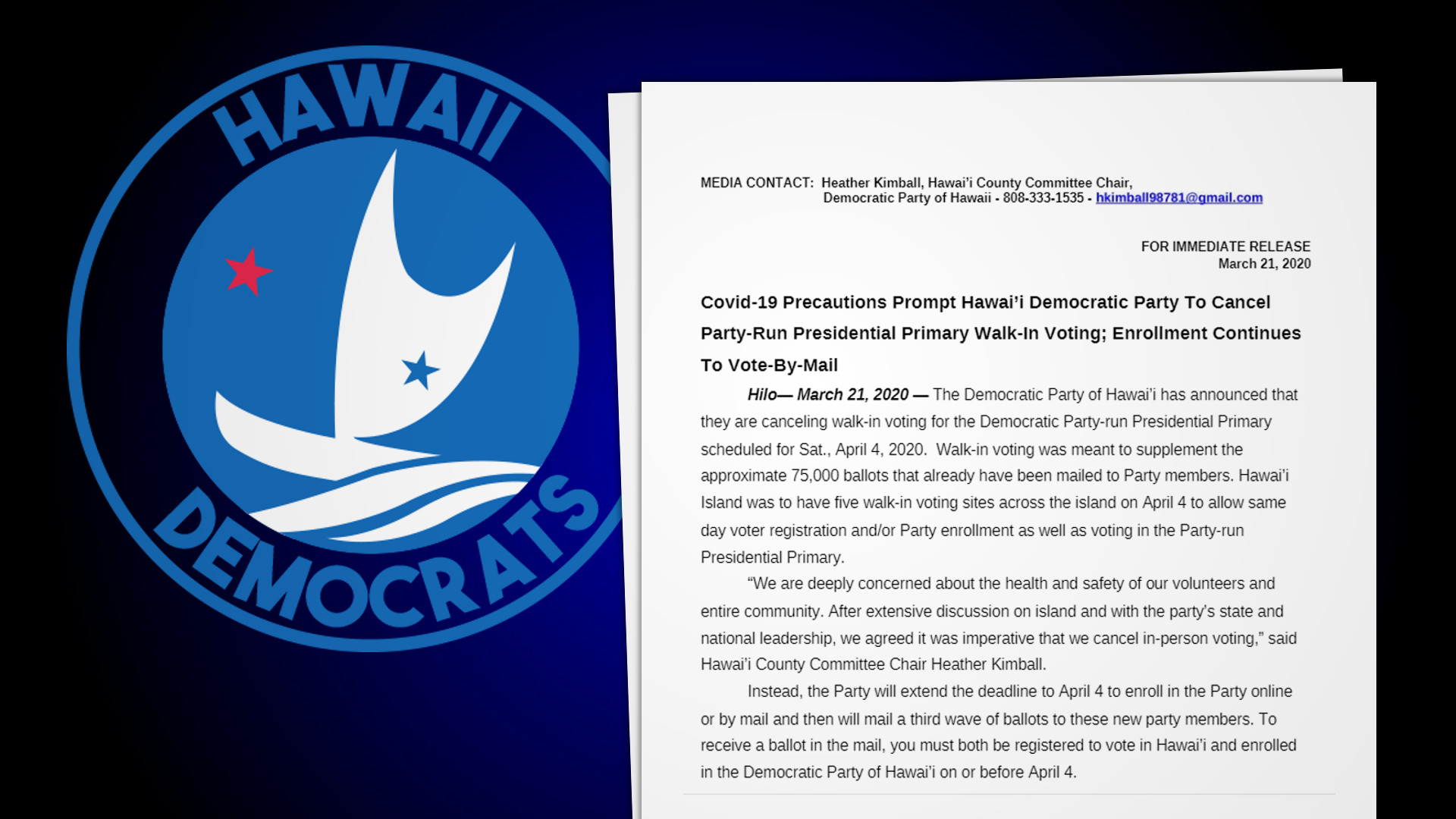 The Democratic Party of Hawai’i has announced that they are canceling walk-in voting for the Democratic Party-run Presidential Primary scheduled for Sat., April 4, 2020. Walk-in voting was meant to supplement the approximate 75,000 ballots that already have been mailed to Party members. Hawai’i Island was to have five walk-in voting sites across the island on April 4 to allow same day voter registration and/or Party enrollment as well as voting in the Party-run Presidential Primary.

“We are deeply concerned about the health and safety of our volunteers and entire community. After extensive discussion on island and with the party’s state and national leadership, we agreed it was imperative that we cancel in-person voting,” said Hawai’i County Committee Chair Heather Kimball.

Instead, the Party will extend the deadline to April 4 to enroll in the Party online or by mail and then will mail a third wave of ballots to these new party members. To receive a ballot in the mail, you must both be registered to vote in Hawai’i and enrolled in the Democratic Party of Hawai’i on or before April 4.

This change has nothing to do with Hawai’i State-run elections.

Kimball said, “As usual, the State of Hawaiʻi will run the State Primary Election August 8, and the General Election November 3. However, in Hawai’i, the political parties run their own Presidential Primaries. Many people think that since they have voted Democrat in state-run elections, they are automatically a member of the Party. In Hawai’i it is a separate process and voters must enroll directly with the Party to receive a Presidential Primary ballot.”

“Party members have been working most of the past year to better inform Hawai’ivoters about the difference between party-run and state-run elections and encourage voters to participate in the Party-Run Presidential Primary to determine how Hawai’i’s delegates to the national Democratic Party Convention cast their votes. There is widespread interest here in this year’s Presidential election and we have already enrolled more than 16,000 new members in the party. Interested residents still have until April 4 to register to vote, and/or enroll in the party to participate in the Party-run Presidential Primary,” said Kimball. Also, any young adult who will be 18 on or before the Nov. 3, 2020 General Election may register now to vote, enroll in the party and receive a mailed ballot for the Party-run Presidential Primary.”

The Hawai’i Democratic Party is working with the Democratic National Committee to finalize procedures and timeline for what will be a third mailing of Presidential Primary ballots. In the meantime, everyone who has already received a ballot in the first or second mailing is urged to cast their vote and mail the ballot back soonest. The second wave of ballots for those who enrolled in the Party between February 18 and March 8 will be arriving in mailboxes in the next few days. Those who have not yet enrolled in the Party can do so at hawaiidemocrats.org on or before April 4 to be included in the third mailing.

“The impact of the COVID-19 pandemic is rapidly evolving. We are determined todo our part to prevent spread of the virus while also ensuring that everyone who wants to participate in the President Primary can,” said Kimball.

In addition to canceling walk-in voting for the Presidential Primary, the Party has also postponed its State Convention from May 23-24, 2020, to the weekend of September 5-6, 2020 in Honolulu. Also, the Hawai’i County Committee (HCC) has postponed the Hawai’i County pre-convention and Convention, which were to be held April 11 and May 2, 2020. New dates have yet to be determined.