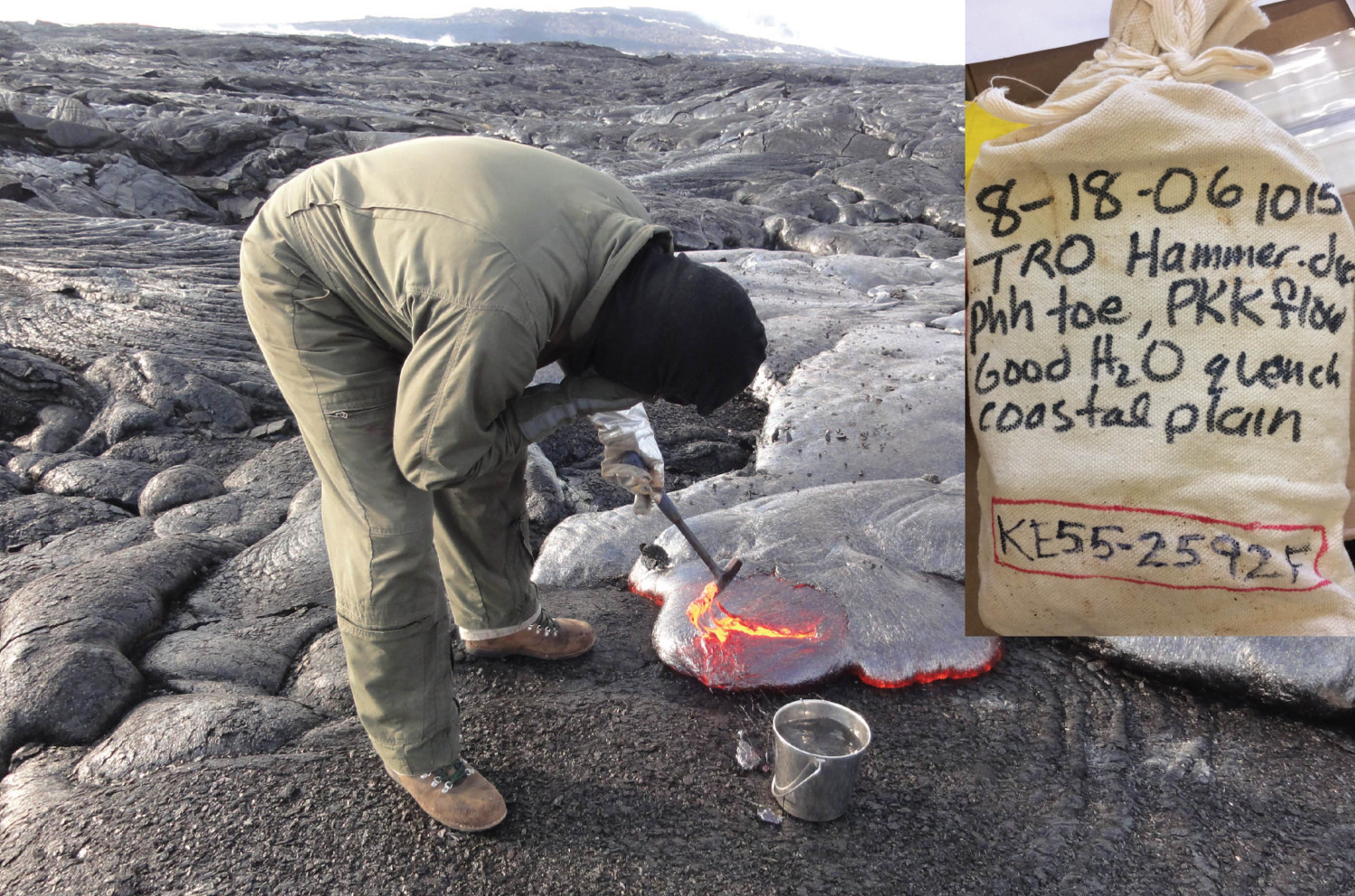 On December 30, 2015, an HVO geologist wore protective gear during collection of a fresh lava sample for chemical analysis from a pāhoehoe breakout along scattered Pu‘u ‘Ō‘ō lava flows. INSET: Metadata is written on a bag that holds a sample taken from pāhoehoe that was collected on August 18, 2006. The front of the bag notes the date and time the sample was collected, sample-collector initials, a description of the sample, and ID; the coordinates of the sample collection location are written on the back of the sample bag. (USGS HVO)

(BIVN) – This week’s Volcano Watch article, written by U.S. Geological Survey Hawaiian Volcano Observatory scientists and affiliates, focuses on geological sample collections, and explains why they are an important resource.

In the past, HVO would occasionally post images of people collecting lava samples on our website. These photos usually featured a person (with little-exposed skin) holding a rock hammer, with a metal bucket nearby. The bucket contained water to “quench” the sample, solidifying the hot lava into a cold glass. Natural-fiber or heat-resistant gloves, and sometimes a face mask, protected the sample collector from heat radiating off the 1150-degrees-Celsius (2100-degrees-Fahrenheit) lava. The hammer was used to scoop some of the molten material into the bucket, which would hiss and steam in reaction; more water would be added to cool down the sample so it could be placed in a cloth bag.

HVO carefully archives or curates these precious geological samples collected by current and past HVO geologists, collaborators, visiting scientists, and volunteers. Most of the HVO samples were collected from around the Island of Hawai‘i over the past several decades as part of HVO’s mission to monitor eruptive activity (sampling active lava flows) or to characterize previous volcanic activity (sampling prehistoric lava flows on or beneath the surface). For samples collected within Hawai‘i Volcanoes National Park, HVO works closely with National Park Service archivists to ensure appropriate record keeping and tracking.

As part of metadata, geologists generally describe the sample location (such as the Southwest Rift Zone of Kīlauea) and characterize the sample itself (a grey-colored, discontinuous, fine ash, for example). Usually, the sample is given a unique identifier (ID), often a combination of numbers and letters, which is written on the sample bag. This ID connects the sample to its metadata, which is entered into a searchable database.

Much preparation and forethought go into sample collection, with prior project planning, permitting, and gaining permission from landowners. For every geologist, it’s important to ask: “What question(s) will this sample help me to answer?” Samples are collected sometimes because their specific chemistry or physical characteristics can reveal important information that helps scientists to understand the past, or on-going, or potential future volcanic activity and hazards.

For example, a sample of ash from the Ka‘ū Desert indicates that ash was deposited in that location at some point in the past and could, therefore, be deposited there in the future. Particle size and chemical analyses of the ash can provide information about the eruption magnitude (size) and character (was the eruption driven by steam or magmatic gas?).

Such information improves understanding of the range of behaviors Hawaiian volcanoes exhibited in the past and could exhibit in the future. Likewise, rapid analyses of molten lava samples during the 2018 lower East Rift Zone eruption allowed HVO to detect changes in magma chemistry that foretold a change in eruptive behavior—the arrival of increasingly hot and fluid lava—and associated hazards.

Several sample collections are currently being curated at HVO. The youngest consists of lava and ejecta from Kīlauea’s 2018 lower East Rift Zone eruption and summit-collapse events. Other collections include lava samples from historical eruptions of Kīlauea (including products of Pu‘u ‘Ō‘ō and ejecta collected downwind of Halema‘uma‘u when there was an active lava lake); geological samples that aided in creating the Geologic map of the Island of Hawaii; and ash and other ejecta collected as part of research to understand older explosive events in Kīlauea’s history. The Pu‘u ‘Ō‘ō collection in particular is perhaps unique in the world for its completeness and longevity covering a single eruptive event and is thus extremely valuable.

Each sample collection and resulting analytical data informs HVO and the wider volcanological community a little more about the behavior and hazards of Hawaiian volcanoes. These collections will continue to be an important resource for researchers, especially because some samples are from areas that are no longer accessible, having been covered by more recent lava flows or within the area of Kīlauea’s summit that collapsed in 2018.

Eventually, one of Hawaii’s volcanoes will erupt again, and HVO will have another sample collection to curate and care for, and to help us understand Hawaiian volcanoes and their hazards a little more.