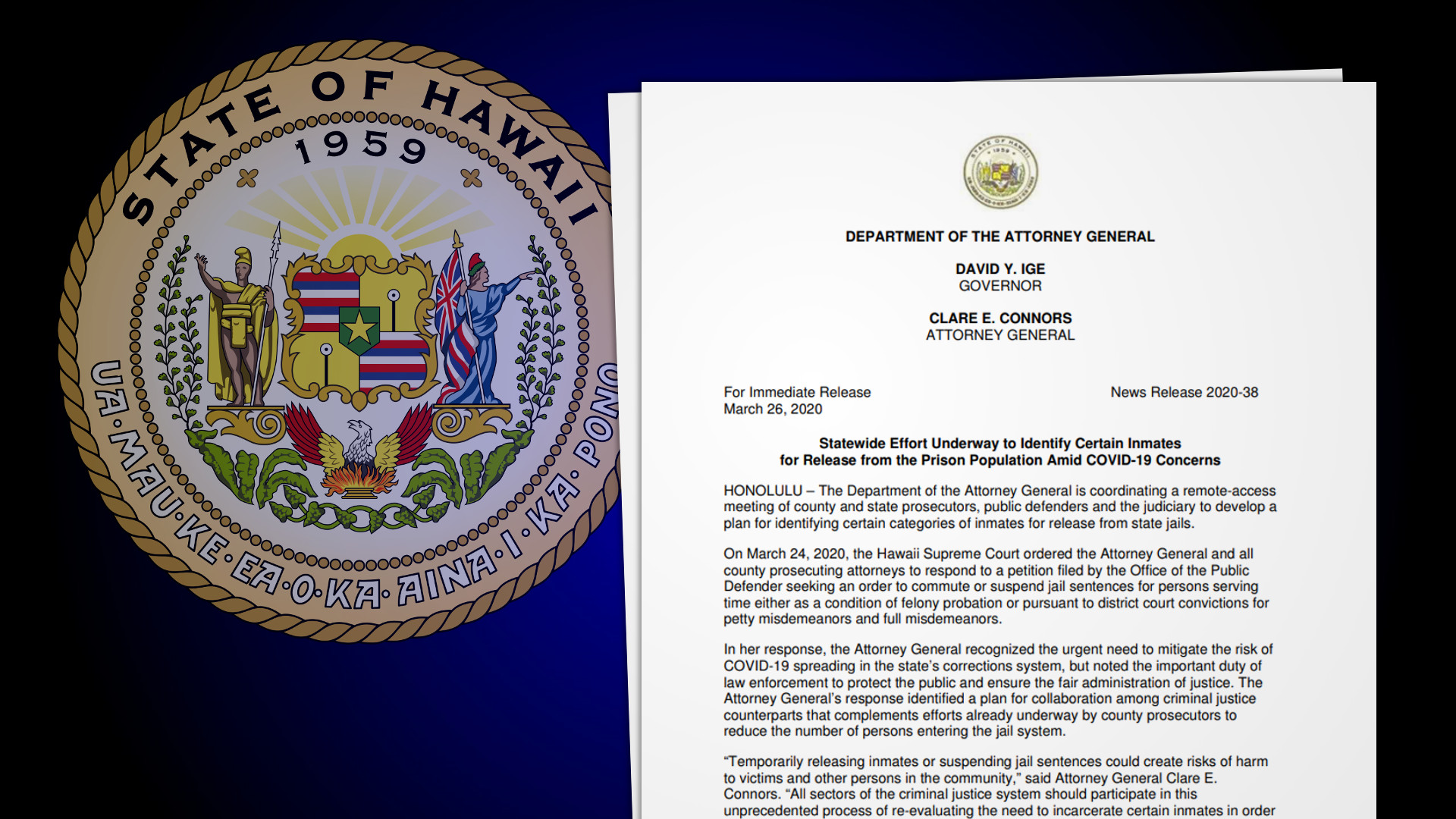 HONOLULU, Hawaiʻi - Today, law enforcement entities, public defenders and the judiciary will discuss a process for evaluating the release, commutation or suspension of jail sentences.

(BIVN) – As the first number of COVID-19 cases were identified in Hawaiʻi, correctional facilities began implementing enhanced screening at entry points, expanding the outside visitor suspension, and suspending job-seeking and resocialization passes under the work furlough program.

Now, the State of Hawaiʻi is working to identify certain inmates for release from the prison population.

From the Office of the Attorney General:

The Department of the Attorney General is coordinating a remote-access meeting of county and state prosecutors, public defenders and the judiciary to develop a plan for identifying certain categories of inmates for release from state jails.

On March 24, 2020, the Hawaii Supreme Court ordered the Attorney General and all county prosecuting attorneys to respond to a petition filed by the Office of the Public Defender seeking an order to commute or suspend jail sentences for persons serving time either as a condition of felony probation or pursuant to district court convictions for petty misdemeanors and full misdemeanors.

In her response, the Attorney General recognized the urgent need to mitigate the risk of COVID-19 spreading in the state’s corrections system, but noted the important duty of law enforcement to protect the public and ensure the fair administration of justice. The Attorney General’s response identified a plan for collaboration among criminal justice counterparts that complements efforts already underway by county prosecutors to reduce the number of persons entering the jail system.

“Temporarily releasing inmates or suspending jail sentences could create risks of harm to victims and other persons in the community,” said Attorney General Clare E. Connors. “All sectors of the criminal justice system should participate in this unprecedented process of re-evaluating the need to incarcerate certain inmates in order to reduce the danger of COVID-19 spreading in our jail system.”

The Department of the Attorney General has circulated to each of the county prosecutors and to the public defender and judiciary a list of currently incarcerated inmates who are in the following categories:

B. serving jail sentences as a condition of felony probation; or

On Friday, law enforcement entities, public defenders and the judiciary will discuss a process for evaluating the release, commutation or suspension of jail sentences for each of the inmates identified on the list. The process contemplates that those most knowledgeable about the inmates are able to ensure that each released person has a place to go, will not put another person at risk of harm and is properly tracked by the system. This process also is intended to ensure that any release of inmates does not further tax the limited government resources that are focused on addressing the general spread of COVID-19 in the community.

On March 20, the Department of Public Safety reported that no inmates have met PUI (Persons Under Investigation) criteria for COVID-19.