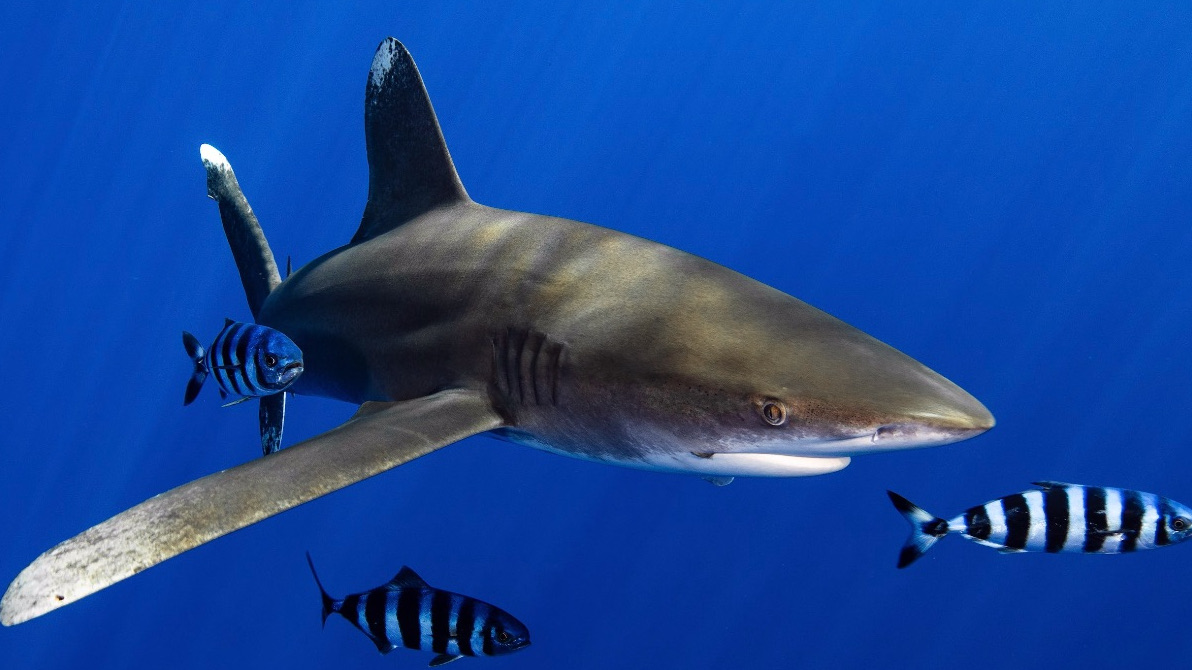 KONA, Hawaiʻi - Earthjustice filed a federal lawsuit on behalf of Conservation Council for Hawai‘i and cultural practitioner Michael Nakachi, for whom the shark has been a sacred family protector for generations.

(BIVN) – A group of plaintiffs that includes a well known kahu manō from Kona has filed a lawsuit alleging that the government is violating federal rules designed to rebuild the population of Pacific oceanic whitetip sharks.

Michael Nakachi is a Native Hawaiian cultural practitioner whose ‘aumakua is the manō, or shark. He traces his family’s lineage back to a direct line of kahu manō (shark guardians or shark keepers) from the island of Maui. Nakachi and his ʻohana often appear at the State Capitol to speak in favor of legislation that would increase protections for sharks in Hawaiian waters.

Here is Thursday’s media release about the lawsuit from Earthjustice:

Earthjustice filed a federal lawsuit today on behalf of a local conservation group and individuals to enforce protections for a dwindling shark species that has roamed the oceans for millions of years.

The lawsuit, filed on behalf of Conservation Council for Hawai‘i and Michael Nakachi, a Native Hawaiian cultural practitioner and owner of a local scuba diving company, aims to force the National Marine Fisheries Service to take long-delayed action to protect oceanic whitetip sharks. For Nakachi, the shark has been his family’s sacred protector for generations.

Oceanic whitetip sharks were historically one of the most abundant sharks in the world’s oceans, but due to both U.S. and international fishing pressure, the population has declined significantly. Scientists estimate that in the Pacific Ocean alone, oceanic whitetip populations have declined 80-95% since the mid-1990s. Despite years of data showing that thousands of sharks are still killed as bycatch in Pacific fisheries each year, the Fisheries Service has failed to declare that Pacific oceanic whitetip sharks are overfished. This declaration would trigger protective action by the Western Pacific Regional Fishery Management Council.

“No protections exist to prevent fisheries from capturing oceanic whitetip sharks as bycatch,” said Moana Bjur, Executive Director of the Conservation Council for Hawai’i. “That needs to change if we are to prevent this incredible apex predator from going extinct. That’s why we’re going to court.”

Listed as threatened under the Endangered Species Act since 2018, oceanic whitetip sharks are no longer targeted by long-liners in the U.S. or by most commercial fisheries worldwide. However, thousands continue to die each year, because they are accidentally caught in nets, lines, or other gear meant to catch different species — such as tuna and swordfish — in the waters off Hawai‘i and American Samoa. Over the past decade, long-liners operating in the Pacific Ocean have captured an estimated 20,000 oceanic whitetip sharks as bycatch.

“It’s time for the government to stop preventable shark deaths,” said Michael Nakachi. “As a kahu manō (guardian to the shark), I feel a personal responsibility to speak up on this issue, but I believe we all share a duty to ensure the survival of this sacred animal.”

The suit asks the court to order the Fisheries Service to make proper notifications that “would trigger necessary protections as expeditiously as possible, and no later than 30 days after this Court’s order.”

Roaming widely, the mobile, solitary oceanic whitetip shark lives in warm, tropical and sub-tropical waters around the world. At the top of the marine food chain, oceanic whitetip sharks are long-lived and slow-growing. A female oceanic whitetip can take nine years to reach sexual maturity. Females give birth to live young, with an average litter of six pups. A female’s reproductive cycle is slow, typically only giving birth every other year after a lengthy gestation period of 10-12 months.

“The oceanic whitetip shark’s unique biology, coupled with the preventable threat of getting accidentally hooked or trapped in fishing gear, means that it is past time for the federal government to do its job and take swift action to protect this species,” said Earthjustice attorney Brettny Hardy.