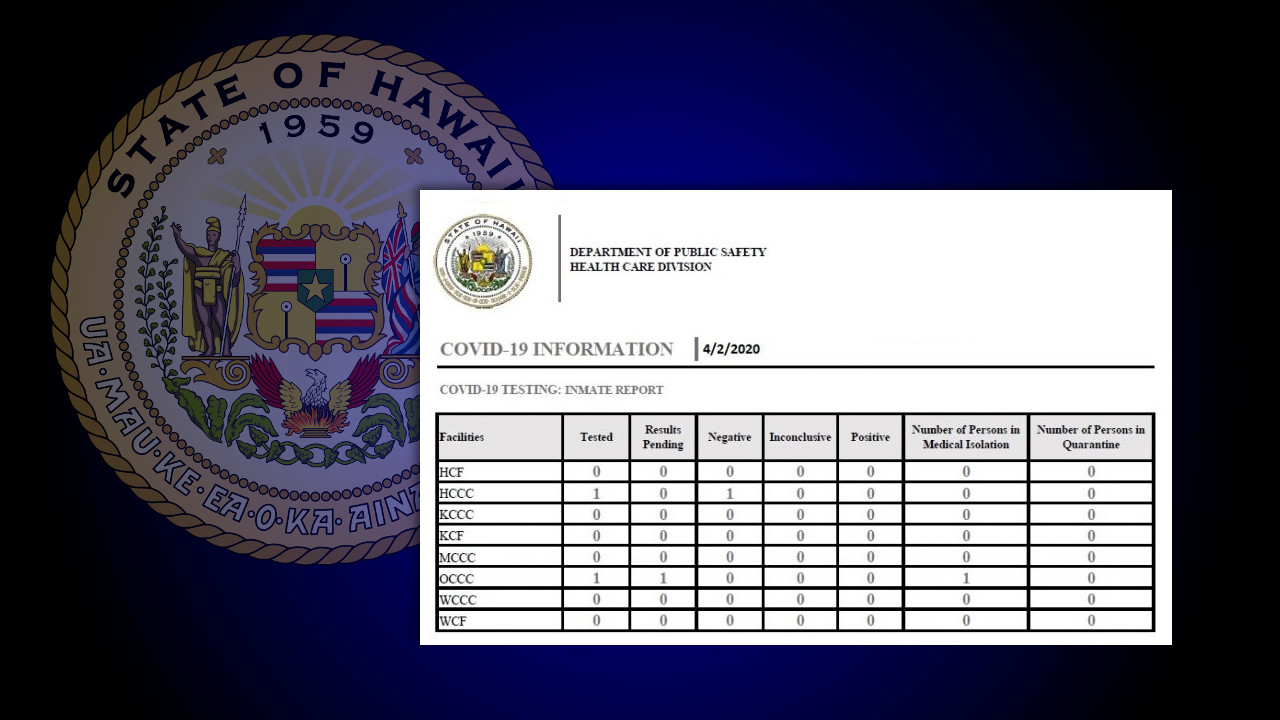 HAWAIʻI - From March 2 to April 2, "there has been a substantial decrease in the jail population", reports the Hawaiʻi Department of Public Safety.

(BIVN) – There are no confirmed cases of COVID-19 in Hawaiʻi prisons or jails, the Department of Public Safety (DPS) reported on Thursday. The department also said there has been a substantial decrease in the jail population due to the pandemic. 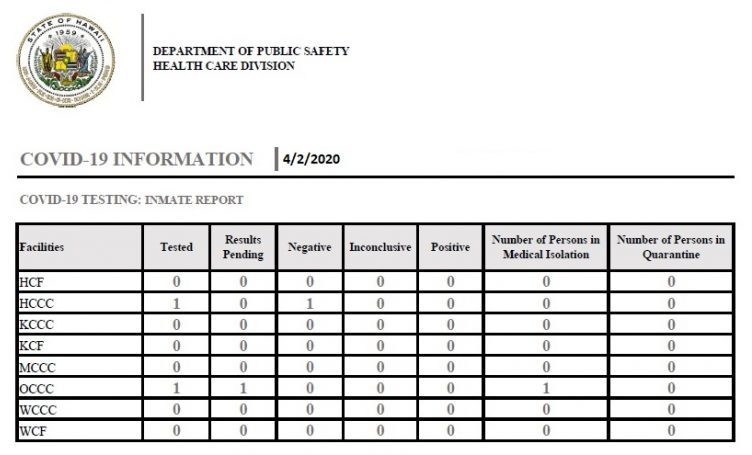 On 3/26/20 the individual listed under HCCC was sent to the hospital for treatment due to poor response to confirmed Influenza A. The hospital conducted a COVID-19 test as a precaution on 3/26/20. The test came back negative on 3/27/20.

The test listed under OCCC was administered by a hospital prior to entry on 4/1/20 and is pending results. That individual is not exhibiting any clinical symptoms. OCCC staff executed their procedures to place the individual directly into medical isolation out of an abundance of caution until outside test results are obtained.

The Hawaiʻi Supreme Court issued an order Thursday addressing two pending petitions filed by the State Office of the Public Defender “regarding the release or changes in the conditions of confinement of inmates amid concerns of a potential COVID-19 outbreak in Hawaii’s correctional centers and facilities,” the state reported, adding:

In its order, the court consolidated the two petitions and appointed retired Intermediate Court of Appeals (ICA) Judge Daniel R. Foley as Special Master to work with the parties in a collaborative and expeditious manner to address the issues raised in the petitions, and to recommend a resolution while protecting public health and safety. An initial summary report from the Special Master is due by April 9, 2020.

The American Civil Liberties Union of Hawai‘i (ACLU) and the Lawyers for Equal Justice (LEJ) also filed a motion seeking leave to file an amicus brief in support of the State of Hawai‘i Office of the Public Defender’s petition. The Hawaiʻi Supreme Court granted motion.

“Public health experts across the United States agree that during this COVID-19 crisis overcrowded jails and prisons pose a great health risk to not only the people incarcerated but also to correctional staff, their families, and the community at large,” said American Civil Liberties Union of Hawai‘i Legal Director Mateo Caballero. “For that reason, courts and jurisdictions everywhere are taking bold and courageous action to reduce the population in their jails and prisons to meet basic public health and constitutional standards and ensure the safety and health of people under their care. Ultimately, this is about people with families and loved ones and our commitment under the constitution to not put their lives and health unnecessarily at risk.”

“We asked the court to appoint an individual with the power to release individuals who pose no danger to the public, including hundreds who have not been convicted of anything and are in custody only because they cannot afford bail,” said Lawyers for Equal Justice Litigation Director Tom Helper. “The Court appointed retired Judge Daniel R. Foley. I am confident that Judge Foley will ensure that individuals who pose a threat to the public are not released, while reducing the population in our overcrowded facilities to levels that are safer for those incarcerated and for the employees of the correctional system.”

“Whether we like it or not, the coronavirus is going to hit Hawaiʻi hard, and soon,” said Wookie Kim, ACLU of Hawaiʻi Staff Attorney. “When it does, it is people who are stuck behind bars — who are kept in cells designed for one person, but that in reality hold three or more people each — who are most vulnerable to contracting COVID-19 and experiencing severe suffering or even death. It is imperative that the courts, prosecutors, DPS, and other officials take immediate and decisive action to prevent that outcome. Such action would benefit not only people who are in Hawaiʻi jails and prisons, but also correctional staff, their families, and the community at large.”

The Hawaiʻi Department of Public Safety wrote in a Thursday media release:

PSD is well aware of the risks of over-population and crowding in our jails, especially during this pandemic. The Department has been following the petition from the Office of the Public Defender (OPD) to the Hawaii Supreme Court requesting release of certain inmates due to concerns of possible spread of COVID-19 to the prisons and jails. Today the court appointed a Special Master to assist all parties involved in a collaborative effort to find a resolution to the issues raised in the petition. We will await further guidance from the Special Master. The court also ordered intermittent sentence incarceration (those ordered into jail custody just on weekends) to be suspended until a judge states otherwise.

The courts have already been collaborating with PSD to reduce the number of pre-trial jail detainees in custody. 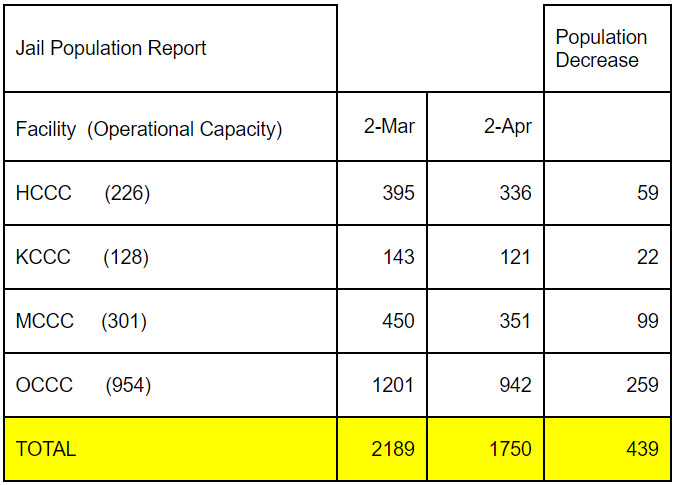 From March 2 to April 2 there has been a substantial decrease in the jail population. This is due to the huge efforts made by the Judiciary, our local police departments and PSD’s Intake Service Division as they work together to limit the number of people requiring admittance into the jails. All decreases were pursuant to independently issued court orders.

Meanwhile, the Hawaiʻi Paroling Authority suspended all parole hearings to the end of April. All hearings previously scheduled to take place during this time frame are being rescheduled.