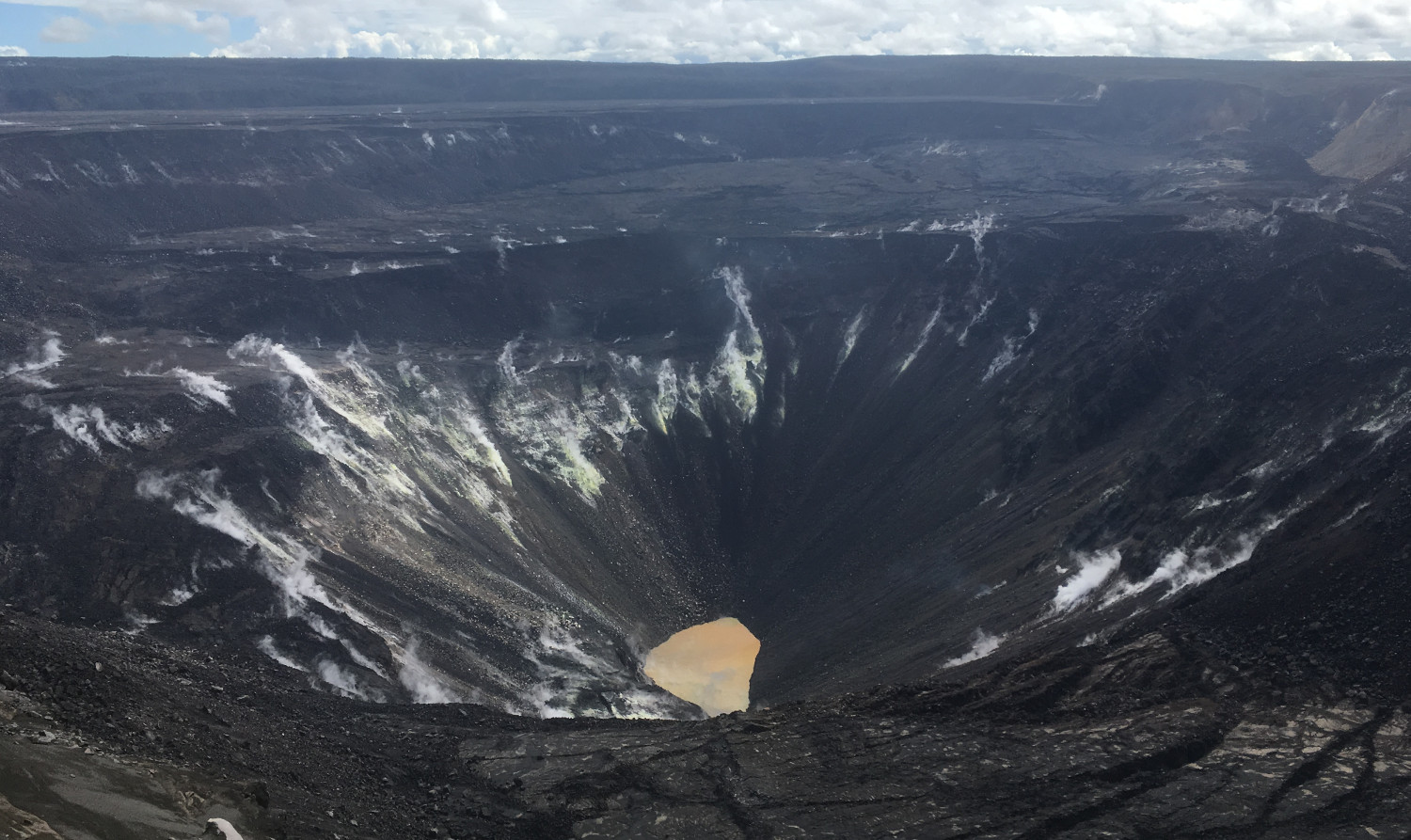 A wide view of Halema‘uma‘u, in a rare window of clear weather during the past week. (USGS photo by M. Patrick) 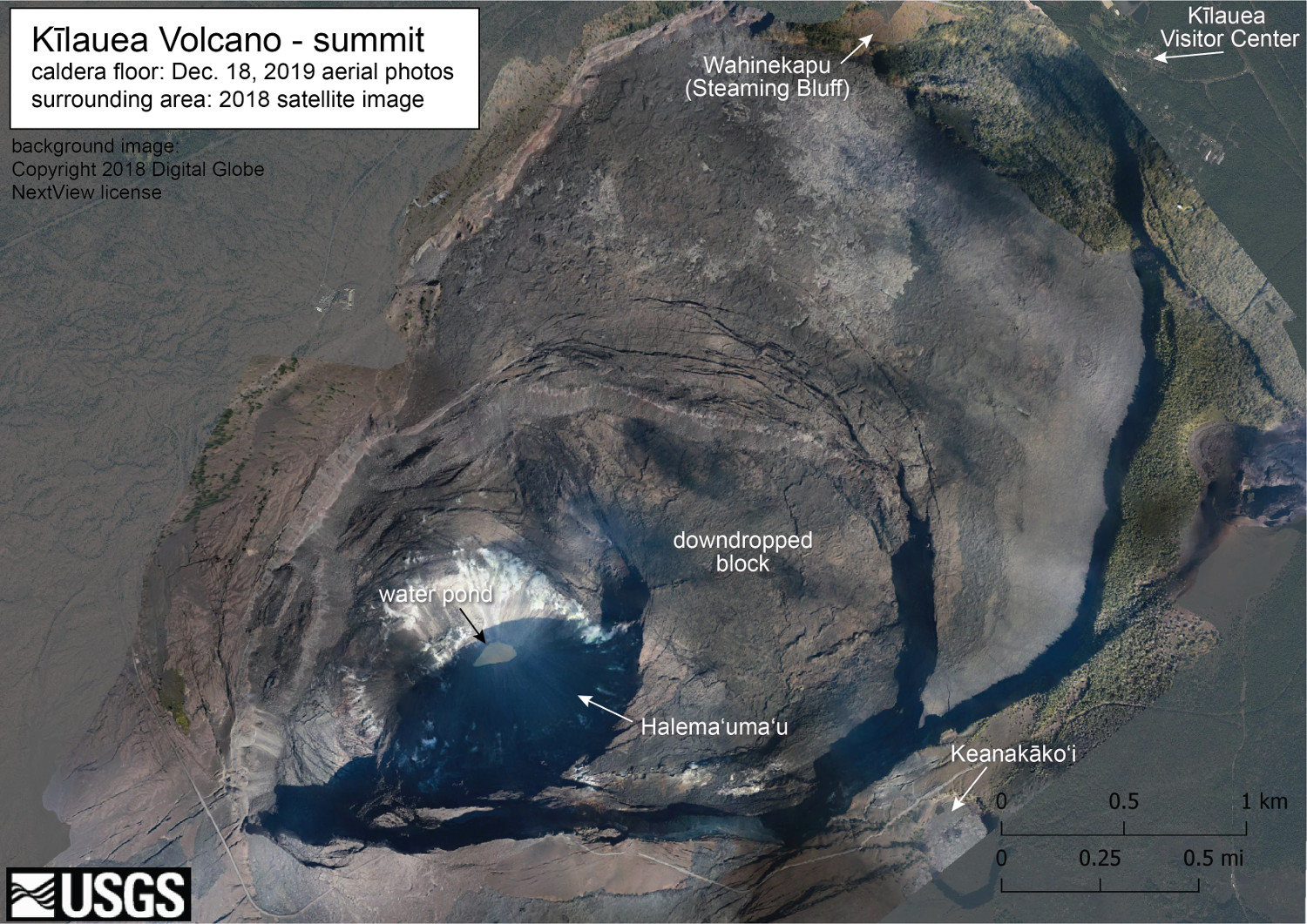 (USGS) The December 18 overflight provided updated aerial photographs of Kīlauea summit, covering the caldera floor and showing the current size of the water pond in Halema‘uma‘u crater. The label “downdropped block” shows the large portion of the caldera floor that subsided, along with the Halema‘uma‘u region, during the 2018 eruption. The surrounding area is shown by a 2018 satellite image.

(BIVN) – Kīlauea Volcano is not erupting, and monitoring data for the month of March “show variable but typical rates of seismicity and ground deformation, low rates of sulfur dioxide emissions, and only minor geologic changes since the end of eruptive activity in September 2018,” scientists report.

In an activity update posted on April 3, the USGS Hawaiian Volcano Observatory reported:

Rates of seismicity over the month were variable but within a range observed over the past year. Sulfur dioxide emission rates are low at the summit and are below detection limits at Puʻu ʻŌʻō and the lower East Rift Zone. The water pond at the bottom of Halema’uma’u continues to slowly expand and deepen. As of March 19th, pond dimensions are approximately 107 meters (~351 feet) by 211 meters (~692 feet). As of April 1st, the current depth is approximately 32 meters or 105 feet. 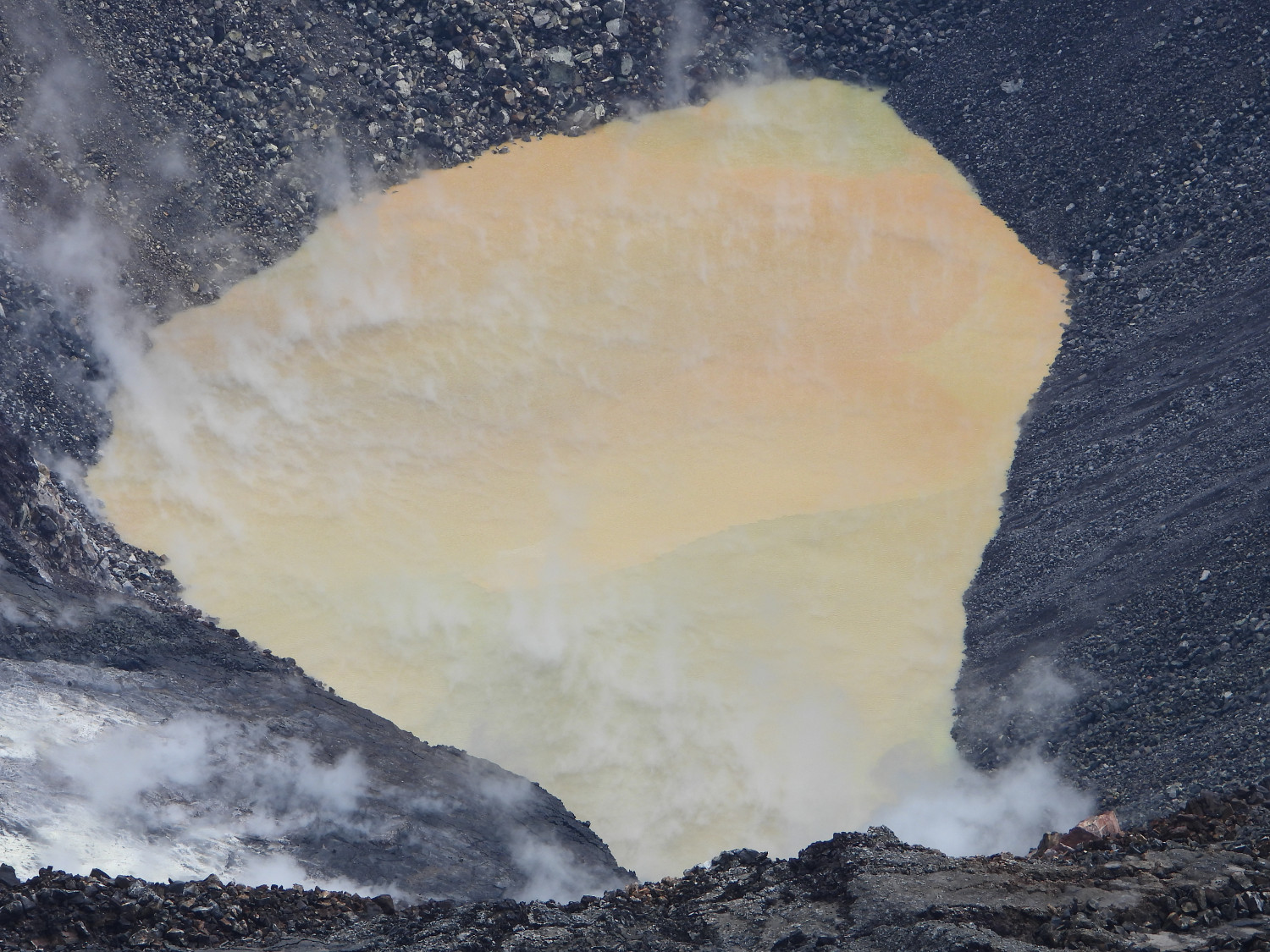 No significant changes were observed in the water pond in Halema‘uma‘u Crater, at Kīlauea’s summit. The water surface still has an orange-brown hue in the center, with greenish areas on the east and west ends (top and bottom of photo) presumably indicating influx of groundwater. USGS photo by M. Patrick.

Over the past month, the summit tiltmeter recorded 10 deflation-inflation events, a number similar to January and February. Since March 2019, GPS stations and tiltmeters at the Kīlauea summit have recorded deformation consistent with slow magma accumulation within the shallow portion of the Kīlauea summit magma system (1-2 km or approximately 1 mile below ground level). Gas measurements show continuing low levels of sulfur dioxide emission from the Halema’uma’u area, consistent with no significant shallowing of magma. Some amount of sulfur dioxide is being dissolved into the summit lake and work continues to try and quantify this process. The pond was last sampled by UAS in January and additional, regular sampling with UAS is planned. 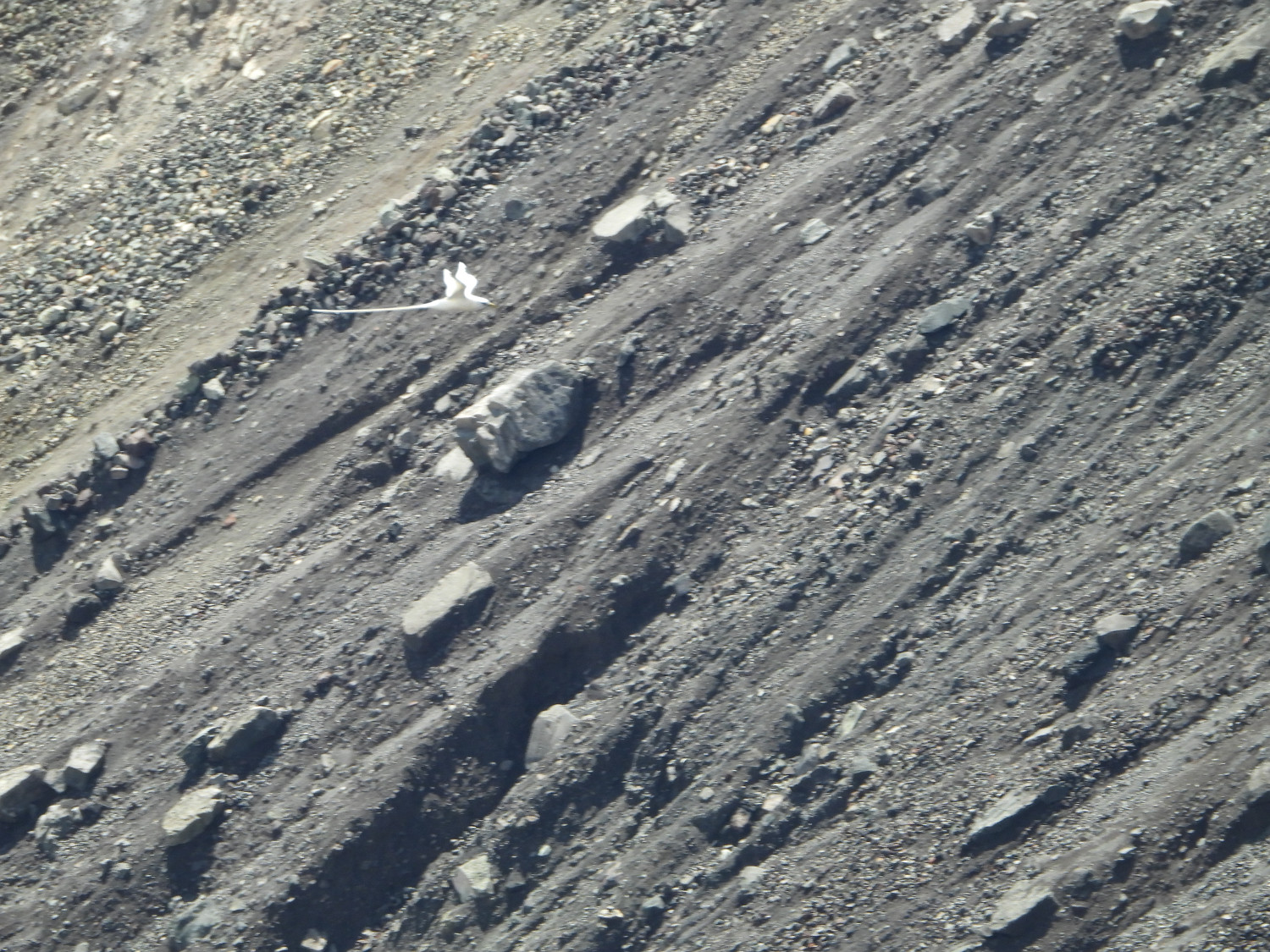 One of the many koa‘e kea (white-tailed tropicbird) circling Halema‘uma‘u today. The still winds allowed their calls to be heard easily while measuring the pond. USGS photo by M. Patrick.

Farther east, GPS stations and tiltmeters continue to show motions consistent with slowed refilling of the deep East Rift Zone magmatic reservoir in the broad region between Puʻu ʻŌʻō and Highway 130. The decrease in deformation rates at tilt station POO, observed in February, continued throughout March. GPS station JOKA, and tilt station JKA, in the lower East Rift Zone, experienced an episode of deformation from March 14-26th with a different direction from the longer term trend. Data retrieved manually in the next few weeks may provide more insight. Monitoring data do not suggest any imminent change in volcanic hazard for this area. The south flank of Kīlauea continues to creep seaward at elevated rates following the May 4, 2018 M6.9 earthquake near Kalapana. HVO continues to carefully monitor all data streams along the Kīlauea East Rift Zone and south flank for important changes.