(BIVN) – The dire unemployment situation that currently exists in Hawaiʻi due to the pandemic, and the hopeful reopening of the economy, was discussed Monday by members of the State House Select Committee on COVID-19 Economic and Financial Preparedness.

Carl Bonham, the executive director of UHERO (the University of Hawaiʻi Economic Research Organization) participated in the meeting, and talked about what has been learned through recent surveys and data analysis.

Bonham cited various documents submitted to the House Committee. In one paper he co-authored, Bonham wrote:

A significant part of Hawaii’s economy is effectively shut down to slow the spread of the coronavirus in the Islands. The mandatory fourteen-day self-quarantine requirement for arriving visitors and residents has essentially put a stop to tourism, and the stay-at-home order for all non-essential workers has shuttered many businesses. The unprecedented pause in economic activity, even if necessary to halt the virus spread, has had a profound negative impact on Hawaii, with a sharp drop in spending, employment, and income. The key question for us as we look forward is how rapidly economic conditions will improve as the positive effects of government relief measures are felt and as restrictions are gradually eased over the coming weeks or months.

Job losses due to COVID19 accumulated during late March and April, with initial claims for unemployment compensation surging by 175,000 during this period. This represents 26% of the February labor force. The number of layoffs differs across industries depending on their exposure to the two main channels of COVID19 impacts: 1) the halt to tourism and 2) the stay-at-home order for local residents. Industries that predominantly cater to visitors (for example, accommodations) are primarily affected by the first channel, but most industries are affected to varying degrees through both channels. Since the available unemployment claims data do not provide industry or occupation identifiers, we must make assumptions about the distribution of job losses across sectors, taking into account their sensitivity to the decline in tourism and the stay-at-home order. These assumptions are informed by results from a recent survey UHERO conducted with the Chamber of Commerce Hawaii and other organizations.

UHERO, the Chamber of Commerce Hawaii, and a dozen other industry associations across the state partnered to field a survey of the impact of the COVID-19 shutdown on businesses and their employees. In just a week, data from 623 businesses was collected.

In a document summarizing the results from the UHERO-Chamber Survey, UHERO assistant professor Philip Garboden wrote:

Industry losses are large, and concentrated where you would expect them

The survey collected information on the number of employees each company employed in January of this year and the number that were still on payroll in April. We also asked businesses to provide their revenue in 2019 and to estimate what it will look like in 2020 – no easy task given the ever-changing nature of the virus response. 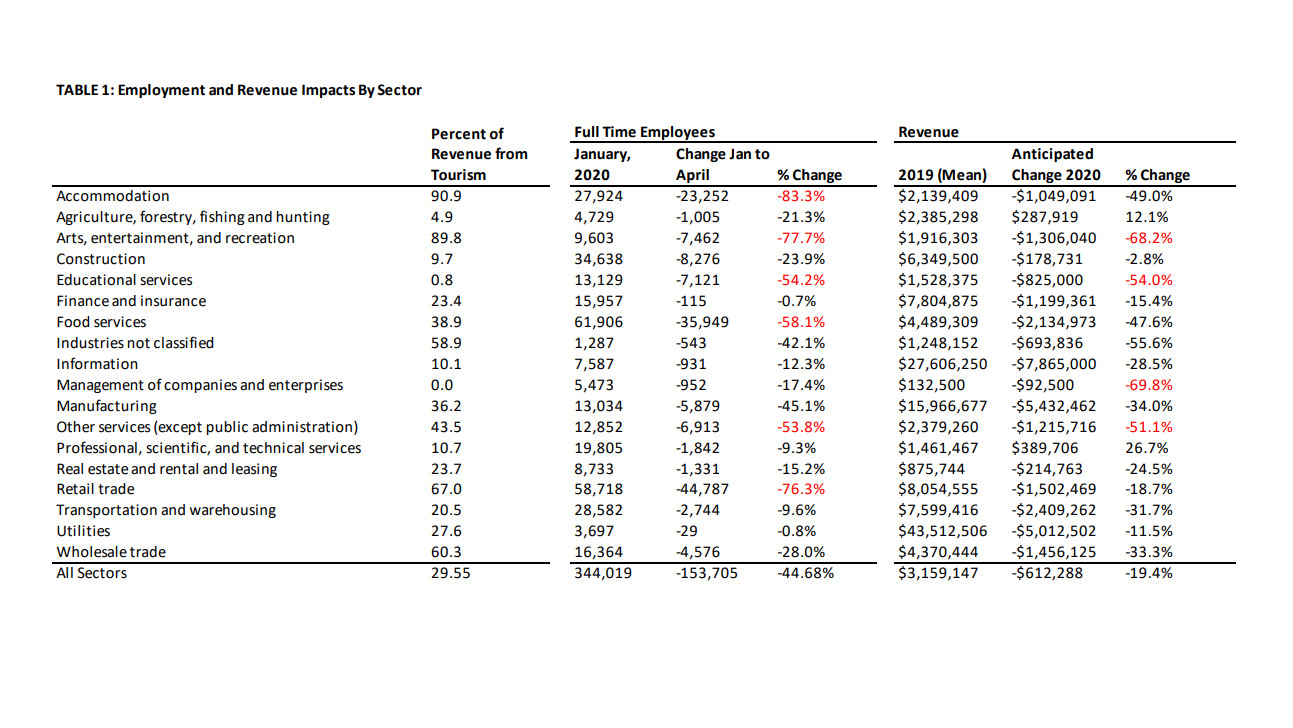 In total, businesses reported reducing their workforces by about 220,000 full- and part-time workers during the COVID-19 economic shutdown. A shocking figure, but not surprising given the number of unemployment claims being processed by the State.

As one would expect, these hardships are not evenly spread across industries. The hardest hit in terms of full-time employee reductions were accommodations (hotels), down 83%, and retail businesses, down 76%. Food, educational, and other services all also saw reductions north of 50% of their pre-crisis full-time workforces.

The anticipated changes in 2020 revenue, while at best guesstimates at this time, provide a sense of employer optimism or pessimism. They tell a similar story to the job loss reports, with a couple of important exceptions. Owners of retail businesses, one of the largest losers in terms of employees, were more optimistic about overall revenue, estimating just a 19% drop. In contrast, management companies are not experiencing large reductions in staff so far, but expect a substantial decline in revenue for the year overall.

In total, about a third (31%) of businesses reported that their revenue has been reduced to essentially zero during the shutdown, including 56% of hotels, 46% of restaurants, and 44% of retail.

The most vulnerable workers are also the most impacted

Within businesses, there are also differences in which employees have been let go. Unfortunately, the trend here suggests that many of the employees who have lost wages during this period are some of the most vulnerable – what are sometimes referred to as “ALICE” families (Asset Limited, Income Constrained, Employed), who have been shown in recent studies to be the most affected by Hawaii’s cost of living even under normal circumstances. 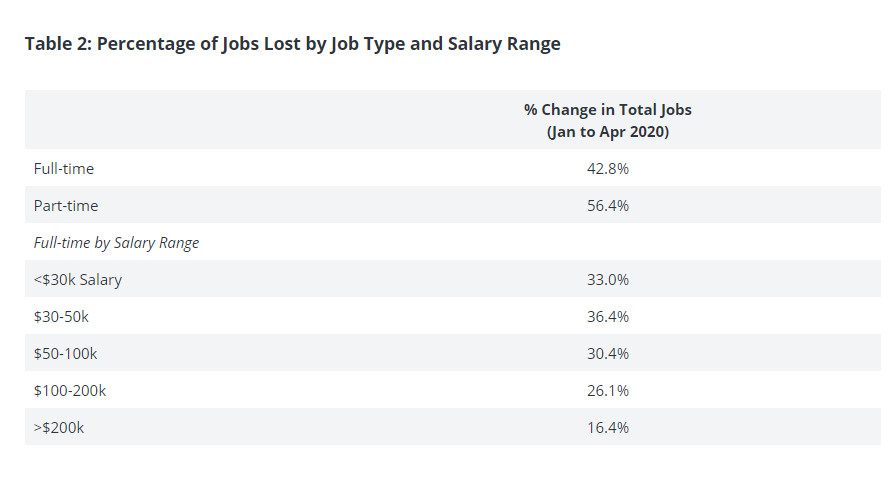 Oahu has the numbers, but tourism is clobbering the Neighbor Islands

Of course the largest absolute number of job losses has been on Oahu, but Oahu job losses as a percentage of their January level (38%) were significantly lower than for businesses located on the Big Island (48%), Kauai (52%), and Maui (58%). This is consistent with the larger share of tourism-reliant companies on the Neighbor Islands.

What do we know so far?

While this is a first look at the numbers, these statistics suggest several things:

First, businesses are suffering mightily, having already made painful cuts in staff, and they anticipate a very rough 2020 financially.

The good news is that most of the businesses surveyed anticipate being able to open and staff-up as soon as it is safe to do so. Indeed 60% said they could return to full staff almost immediately, with the rest phasing in as tourism returns to the Islands. 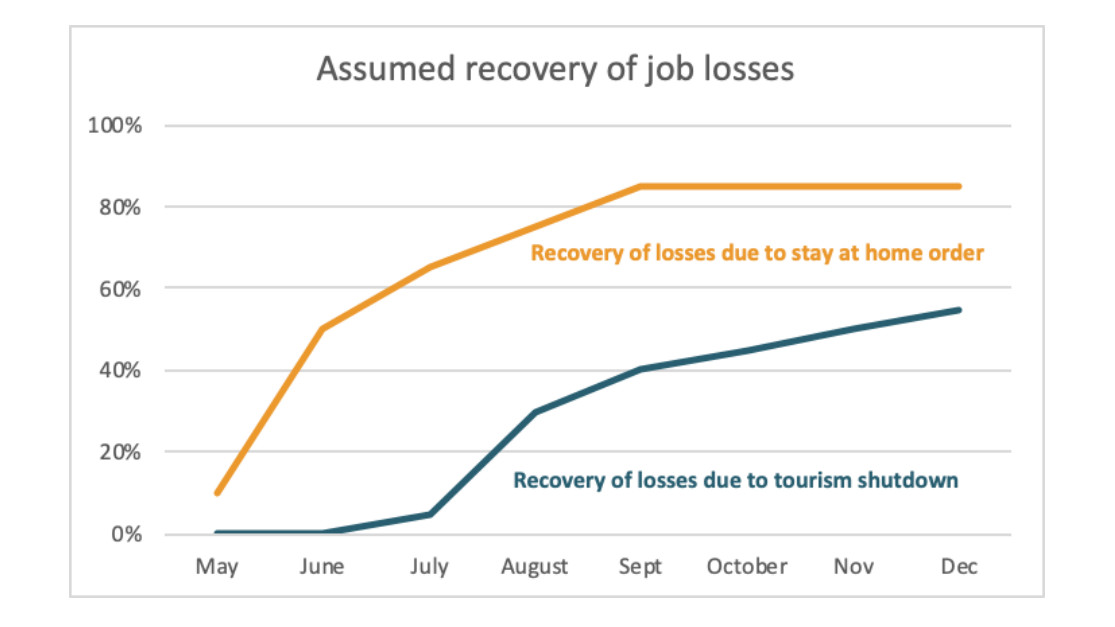 Unfortunately, the data we collected suggest that the Small Business Administration PPP forgivable loan program may not be enough to sustain many businesses. It will certainly help increase the retention of workers, primarily in part-time positions. But 24% of the businesses surveyed said that if no additional support is made available to them, they do not see their business surviving, and another 32 percent said they anticipate needing to make more staff cuts in order to survive.

Finally, the impact of the crisis will hit hardest the very people and places who are already the most vulnerable. While we did not find statistically meaningful differences in outlook based on gender or ethnicity of the business owner, we do show that the employees who have lost their jobs are likely those already struggling to make it. This will have wide-ranging consequences for these families and the need for supportive social services.