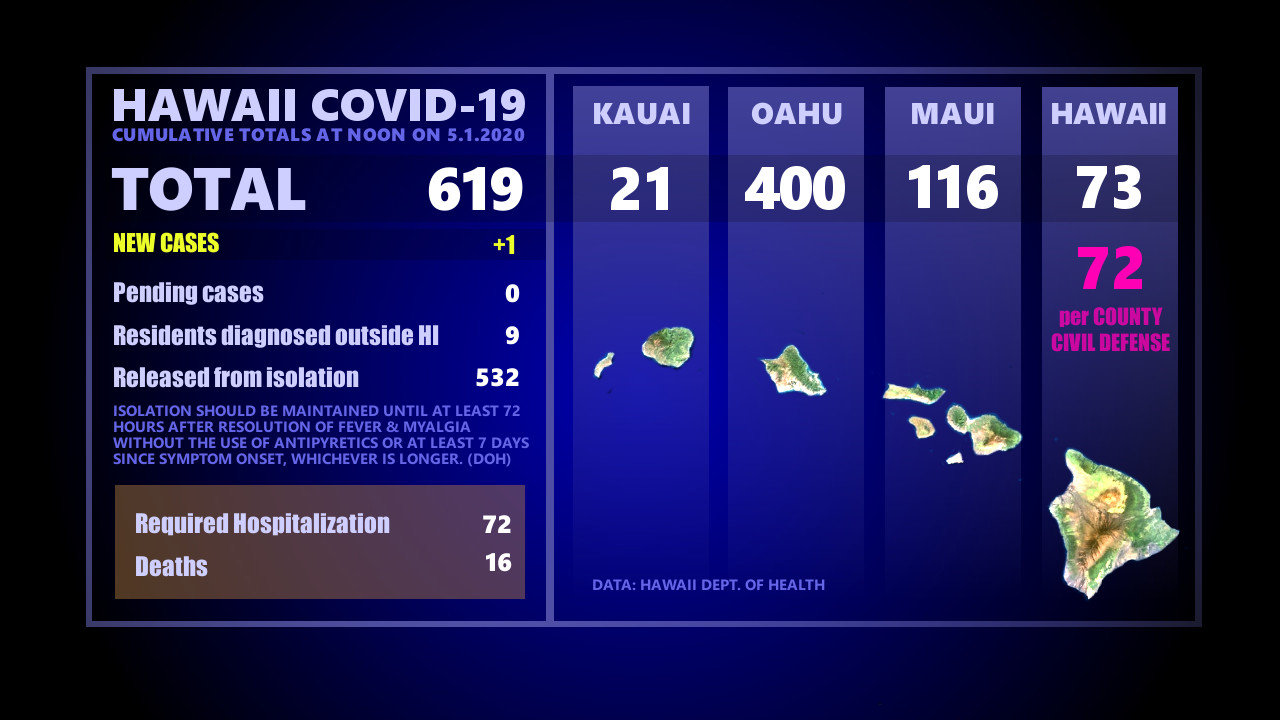 HAWAIʻI - There have been 619 cases of COVID-19 identified in Hawaiʻi. Of those cases, 12% have required hospitalization, and over 80% were residents, state health officials say.

(BIVN) – There was only one newly reported case of COVID-19 in the State of Hawaiʻi today, bringing the statewide total to 619.

This Island and State are doing very well in minimizing the spread and impact of the coronavirus. It is very important to follow the policies of distancing, gatherings, face coverings, cleanliness, and personal health of physical and emotional care. Know that all these policies have one goal in common; to stop the spread of the virus. Do your part and wear a mask.

Yesterday, 640 people arrived in Hawaii including 166 visitors and 196 residents. During this same time last year, nearly 30,000 passengers arrived in Hawaii daily, including residents and visitors. Yesterday marked five weeks since the state’s mandatory 14-day self-quarantine started for all passengers arriving in Hawaii from out of state. The quarantine order was expanded on April 1st to include interisland travelers. This table shows the number of people who arrived by air from out of state yesterday and does not include interisland travel.

The State of Hawaiʻi COVID-19 Joint Information Center issued this news release, describing an alleged story of a broken honeymoon self-quarantine on Oʻahu:

A California couple allegedly scoffed at Hawai‘i’s mandatory traveler self-quarantine mandate and were arrested yesterday by special agents from the Dept. of the Attorney General.

20-year-old Borice Leouskiy and 26-year-old Yuliia Andreichenko of Citrus Heights, CA, came to Hawai‘i on their honeymoon and entered a Waikiki-area hotel after 10 p.m. on Wednesday. Both were raised in the Ukraine and Andreichenko is a Ukranian National, while Leouskiy is a U.S. citizen. A front desk manager read them the requirements of the self-quarantine order. They reportedly said this contradicted what airport screeners told them. They also indicated they planned to visit friends and go to parks and beaches and claimed airport screeners told them that was okay. The hotel manager reiterated the rules and said the couple scoffed at him again and then left the hotel.

After midnight, they returned with a pizza and told the manager they were allowed to be outside and to buy food. They checked in and refused to sign the required quarantine acknowledgement.

Yesterday morning, the hotel’s general manager was informed Leouskiy and Andreichenko had again left their room. When they came back, they were told again, they were in violation and again said their activities were permitted. AG Special Investigators were notified and arrested the couple. They are being charged under Hawai‘i Revised Statutes for unsworn falsification to authority and violation of the 14-day quarantine.

Attorney General Clare Connors noted, “We appreciate the vigilance and cooperation of the hotel staff, and staff at other hotels, in helping maintain the health and safety of visitors and residents. It is important that everyone flying into Hawai‘i at this time, abide by our mandatory rules. Law enforcement, in partnership with other state and county agencies and the travel industry are continuing to monitor compliance with the mandatory self-quarantine rule.”