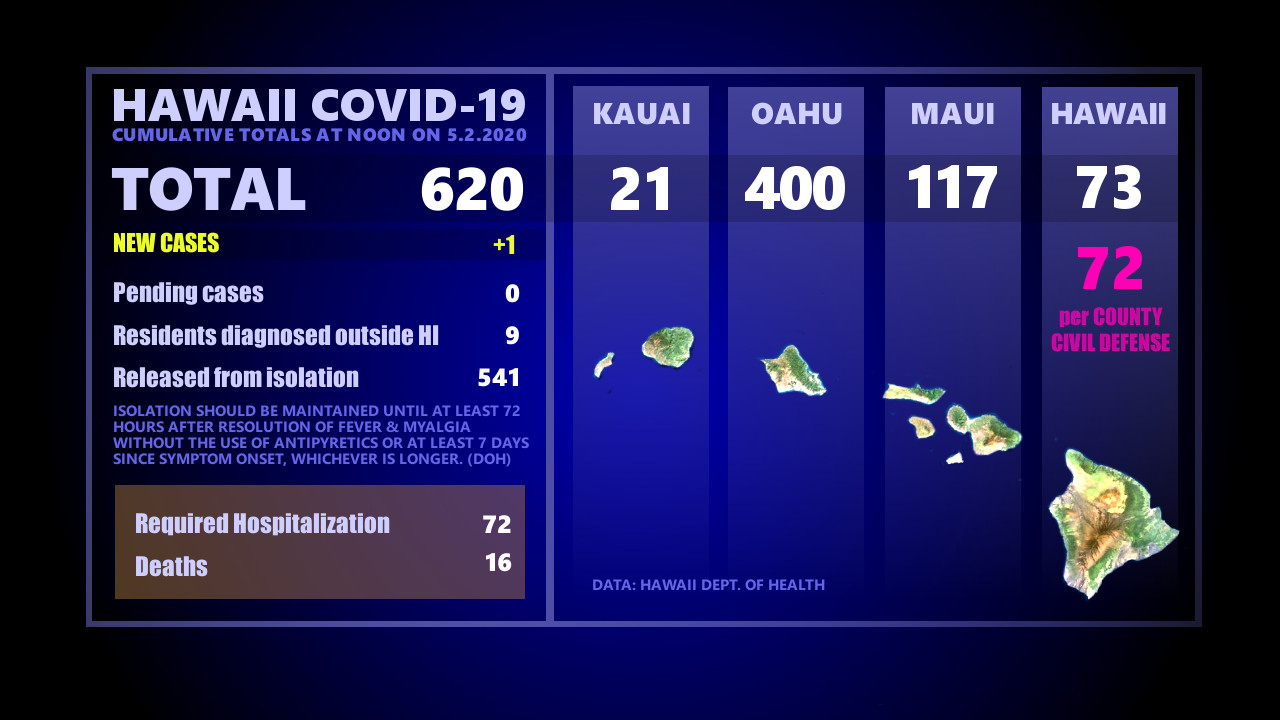 HAWAIʻI - As the number of newly identified cases dwindle, 686 people arrived in Hawaiʻi yesterday, and the State distributed $87 million in unemployment insurance benefits.

(BIVN) – There was only one newly identified case of COVID-19 in the State of Hawaiʻi on Saturday, bringing the statewide cumulative total 620 cases.

The number of cases identified on Hawaiʻi island remained 73, the state said, with 63 released from isolation.

From the Hawaiʻi Department of Labor and Industrial Relations:

DLIR Director Scott Murakami said, “The department was again able to deliver a record level of benefits in a week and for that I am tremendously grateful for our workers. We know that there are still many in our community who are suffering, and we are resolute in providing a greater level of relief as soon as possible.”

Yesterday, 686 people arrived in Hawaii including 223 visitors and 187 residents. During this same time last year, nearly 30,000 passengers arrived in Hawaii daily, including residents and visitors. The state’s mandatory 14-day self-quarantine started on March 26th for all passengers arriving in Hawaii from out of state. The quarantine order was expanded on April 1st to include interisland travelers. This table shows the number of people who arrived by air from out of state yesterday and does not include interisland travel.

From the Hawaiʻi Department of Public Safety:

From March 2 to May 1 there has been an 810-person decrease in the jail population across the state. These reductions are due to the huge, up-front diversion efforts made by county police departments, PSD’s Intake Services Center Division, and the State Judiciary.

Currently there are no confirmed cases of COVID-19 in the prisons or jails. Testing report [available here].

PSD keeps a regular supply of personal protective equipment (PPE) for normal circumstances, but like all health care workers and first responders across the country, supply on hand was quickly depleting. To get ahead of the need, PSD submitted a large order for extra PPE which was received last week and distributed to correctional facilities across the state.

Inmates in the sewing program at the Waiawa Correctional Facility on O‘ahu, the Kulani Correctional Facility, and the Hawai‘i Community Correctional Center are producing as many as 4,400 cloth barrier masks a day. Masks made on Hawai‘i Island will be shipped to the Hawai‘i Correctional Industries (HCI) O‘ahu office for distribution, thanks to support by Aloha Air Cargo. HCI has also delivered 6,021 cloth masks to other state and federal agencies and are continuing to fill orders for over 50,000 masks. The orders are expected to be completed by the end of May. HCI will expand orders from the public early next week. HCI can be reached at 808-677-6638 or by email at psd.hawaiici@hawaii.gov