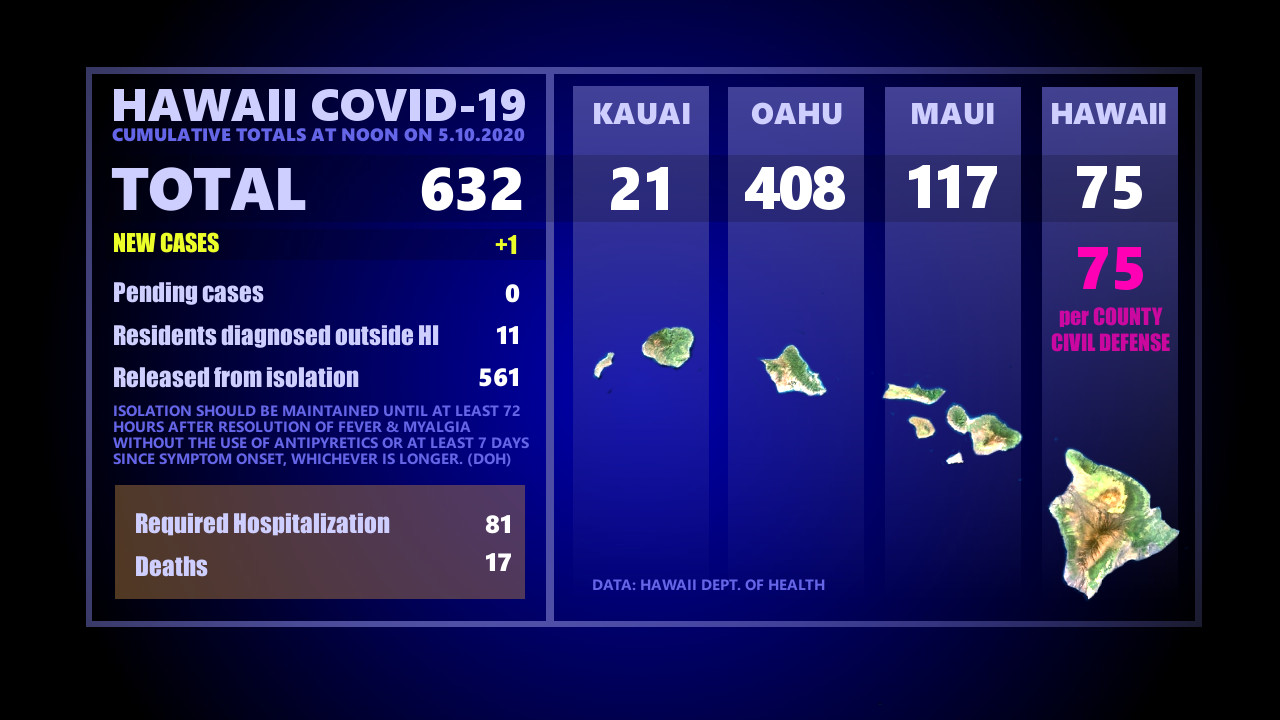 Hawaii COVID-19 Updates for Sunday, May 10

HAWAIʻI - One newly reported case of COVID-19 on Oʻahu brings the cumulative total cases statewide to 632, as Hawaiʻi island holds at 75 cases.

(BIVN) – There was only one newly reported case of COVID-19 in the State of Hawaiʻi today, bringing the statewide total to 632. The case was identified on Oʻahu.

On Hawaiʻi island, the total number of people tested positive for Hawaii Island remains at 75. “From this, 74 have been cleared as recovered with the remaining 1 being quarantined at home and monitored by the Department of Health,” said the Hawaiʻi County Civil Defense agency. “At this date, for Hawaii Island, no one is hospitalized.”

According to the message from the County on Sunday morning:

These are very good numbers for Hawaii Island and Hawaii State, so much gratitude to the health care family for their guidance, hard work, and care. So proud of Hawaii State, being the number 1 in the nation of testing per capita, so proud of Hawaii being in the top two states of having the lowest active cases identified.

This reinforces the importance of following the policies of face covering, distancing, gatherings, cleanliness, and keeping yourself physical and emotionally healthy. We need to continue the good work following the preventive policies to keep Hawaii safe, and do our part to stop this virus from affecting the beautiful lifestyle of Hawaii.

Thank you very much for listening, a wonderful Mother’s Day to you.

Yesterday, 857 people arrived in Hawaii including 255 visitors and 334 residents. During this same time last year, nearly 30,000 passengers arrived in Hawaii daily, including residents and visitors. The state’s mandatory 14-day self-quarantine started on March 26th for all passengers arriving in Hawaii from out of state. The quarantine order was expanded on April 1st to include interisland travelers. This table shows the number of people who arrived by air from out of state yesterday and does not include interisland travel.

Majority of the people who flew to Hawaii yesterday arrived on Oahu. The following tables show what the Oahu visitors indicated as the purpose of their trip and their type of accommodation, and they can choose more than one. This data was collected from the HTA survey on the back of the Hawaii Agriculture Declaration Form. People are not mandated by law to fill out the survey so some are left blank. 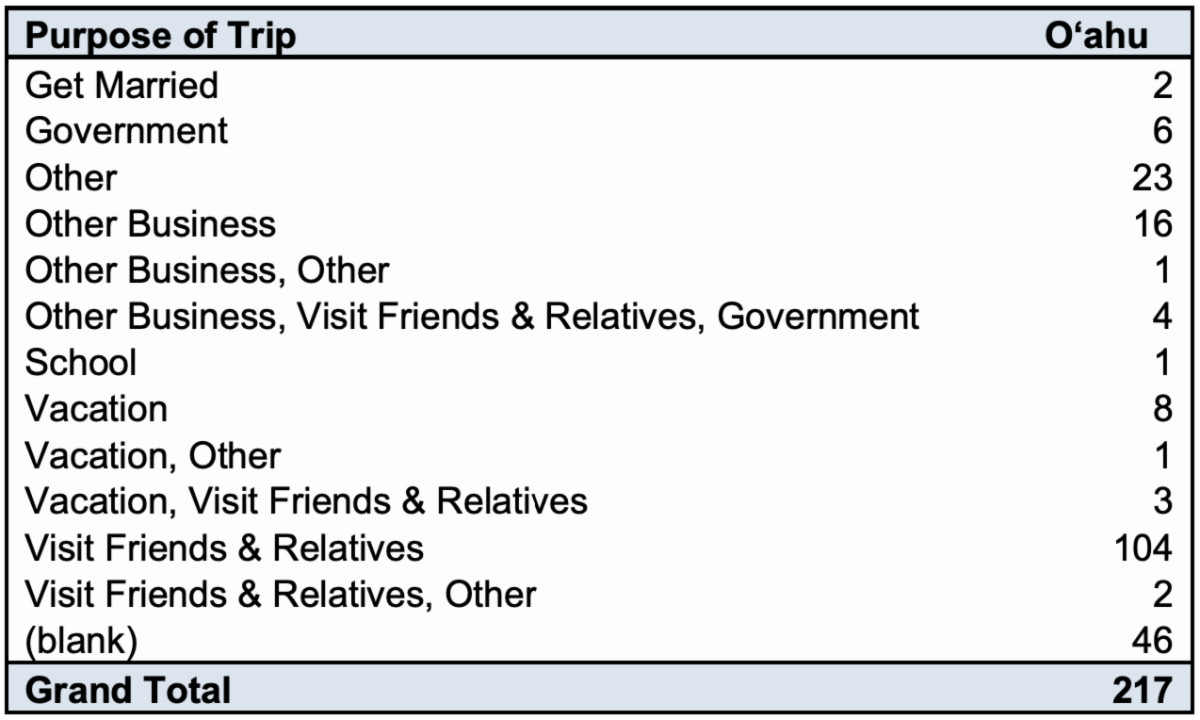 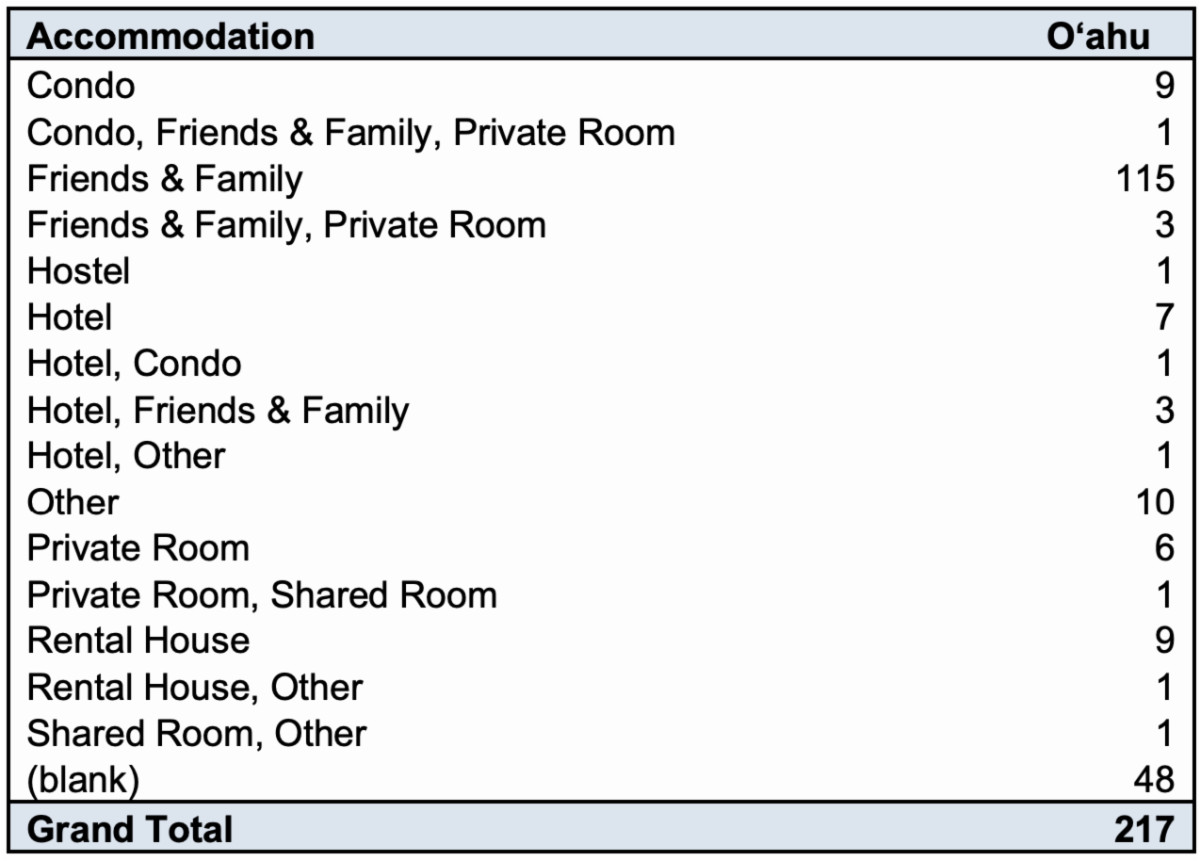