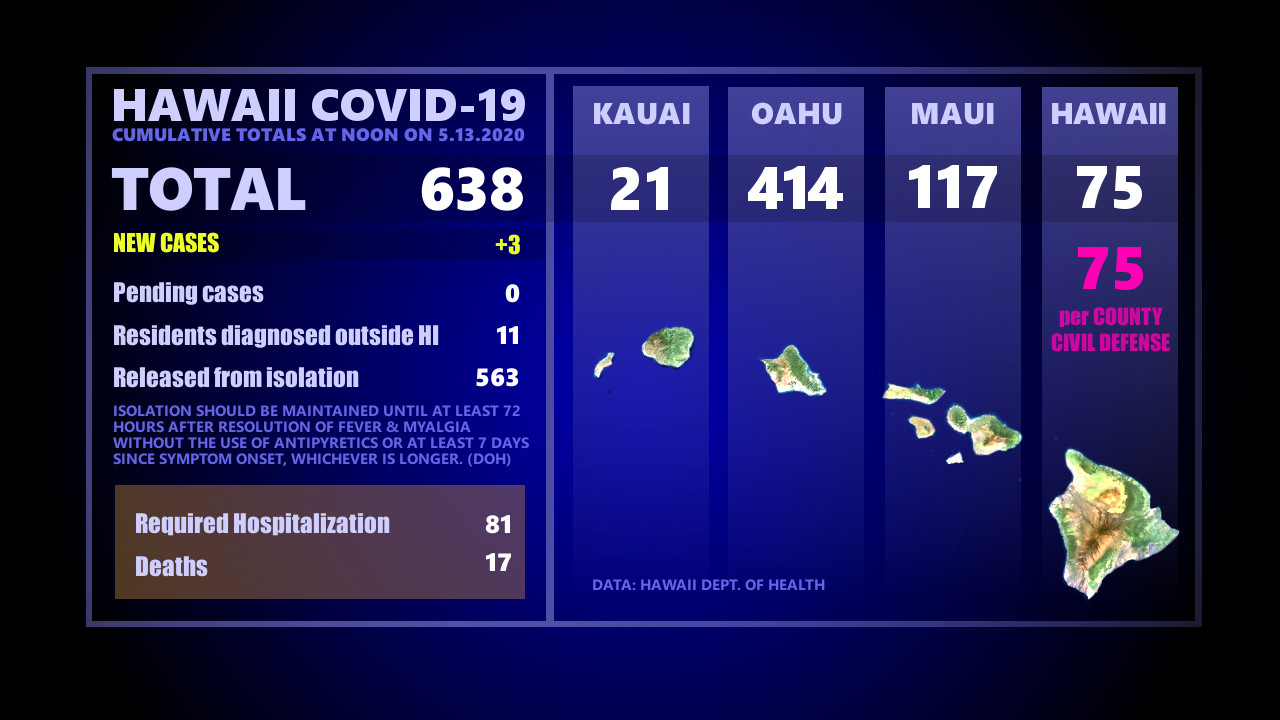 Hawaii COVID-19 Updates for Wednesday, May 13

HAWAIʻI - There were three newly reported cases of COVID-19 in the State of Hawaiʻi as of noon on Wednesday, all of them on Oʻahu.

(BIVN) – There are 3 newly identified cases of COVID-19 on Oʻahu today, bringing the cumulative, statewide total to 638. There are no newly reported cases on Hawaiʻi island, which means the total number of cases remains 75.

In its morning civil defense message, Mayor Harry Kim talked about the number of cases in relation to the number of tests. The message stated:

The Health Care organizations, to all of you, and the supporting agencies, a huge acknowledgement and thank you, for your good work of developing and continuing a comprehensive testing network for the safety of Hawaii’s people. Know that early testing means early detection and early care, and you are helping developing a comprehensive database of information for health care officials to know what is going on and to keep on top of things.

For your information drive-thru testing will be conducted today in Puna, at the Pahoa district park, hours are from 9am this morning till 12 noon. Thank you, Premier Medical for conducting this free service and Hope Services, Bay Clinic, Hawaii National Guard, and County Task Force for helping.

A food drop off service will be conducted today in Hilo at the Civic Center Parking lot, hours are from 10 this morning till noon today. Thank you to the Food Basket, and the multitude of contributors for doing this and the Police, Hawaiian National Guard, and the State Sherriff Department for helping.

Remember the good numbers today, just reinforces the importance of following the policies of prevention. The virus threats still remain, and we need to get better and keep Hawaii safe.

“I encourage state leaders to move at the speed of the virus and establish a contact tracing program that is fully operational as soon as possible. There’s simply not any time left, but there is plenty of money to get this done,” said Senator Schatz in a media release. Sen. Schatz is a member of the Senate Appropriations Committee. The media release added:

Yesterday, 852 people arrived in Hawaii including 264 visitors and 321 residents. During this same time last year, nearly 30,000 passengers arrived in Hawaii daily, including residents and visitors. The state’s mandatory 14-day self-quarantine started on March 26th for all passengers arriving in Hawaii from out of state. The quarantine order was expanded on April 1st to include interisland travelers. This table shows the number of people who arrived by air from out of state yesterday and does not include interisland travel.

Hawaiʻi Senator Mazie Hirono joined senate colleagues in support of a bicameral bill to help college students complete coursework during the coronavirus pandemic. According to a media release:

Today, Senators Mazie K. Hirono (D-Hawaii), Amy Klobuchar (D-Minn.), Gary Peters (D-Mich.), and Jacky Rosen (D-Nev.) introduced a bill to boost access to high-speed internet for college students as they continue their studies remotely during the coronavirus pandemic. The Supporting Connectivity for Higher Education Students in Need Act would invest $1 billion for the creation of the Emergency Higher Education Connectivity Fund at the National Telecommunications Information Administration. The Fund would support college and graduate students now studying from home by providing internet connections and equipment like Wi-Fi hotspots, routers, modems, laptops, tablets and other internet-enabled devices. The bill prioritizes students most likely to lack internet access, including those studying at minority-serving and rural-serving institutions, and students who receive need-based financial aid – like Pell Grants—and other government assistance.

“The COVID-19 pandemic has illuminated the digital divide in America. There are an estimated 14 million households—including more than 52,000 Hawaii households—that don’t have any internet,” Senator Hirono said. “The Supporting Connectivity for Higher Education Students in Need Act invests in college students who are trying to keep up with their studies by providing internet-connected devices and broadband access to continue their education, even as social distancing continues.”

“The Emergency Higher Education Connectivity Fund will provide critically needed support for our students who need us most,” said University of Hawaii President David Lassner, who chaired the State of Hawaii Broadband Task Force. “Having adequate equipment and broadband service is now essential for success in higher education, and the students who stand to benefit most from higher education often face the greatest financial and geographic barriers.”

Senator Hirono has advocated for additional funding during the pandemic for the Lifeline Program, which boosts internet connectivity for lower-income Americans. She has also introduced legislation to close the digital equity gap, so that students, families, and workers have access to technological resources and information, regardless of income.