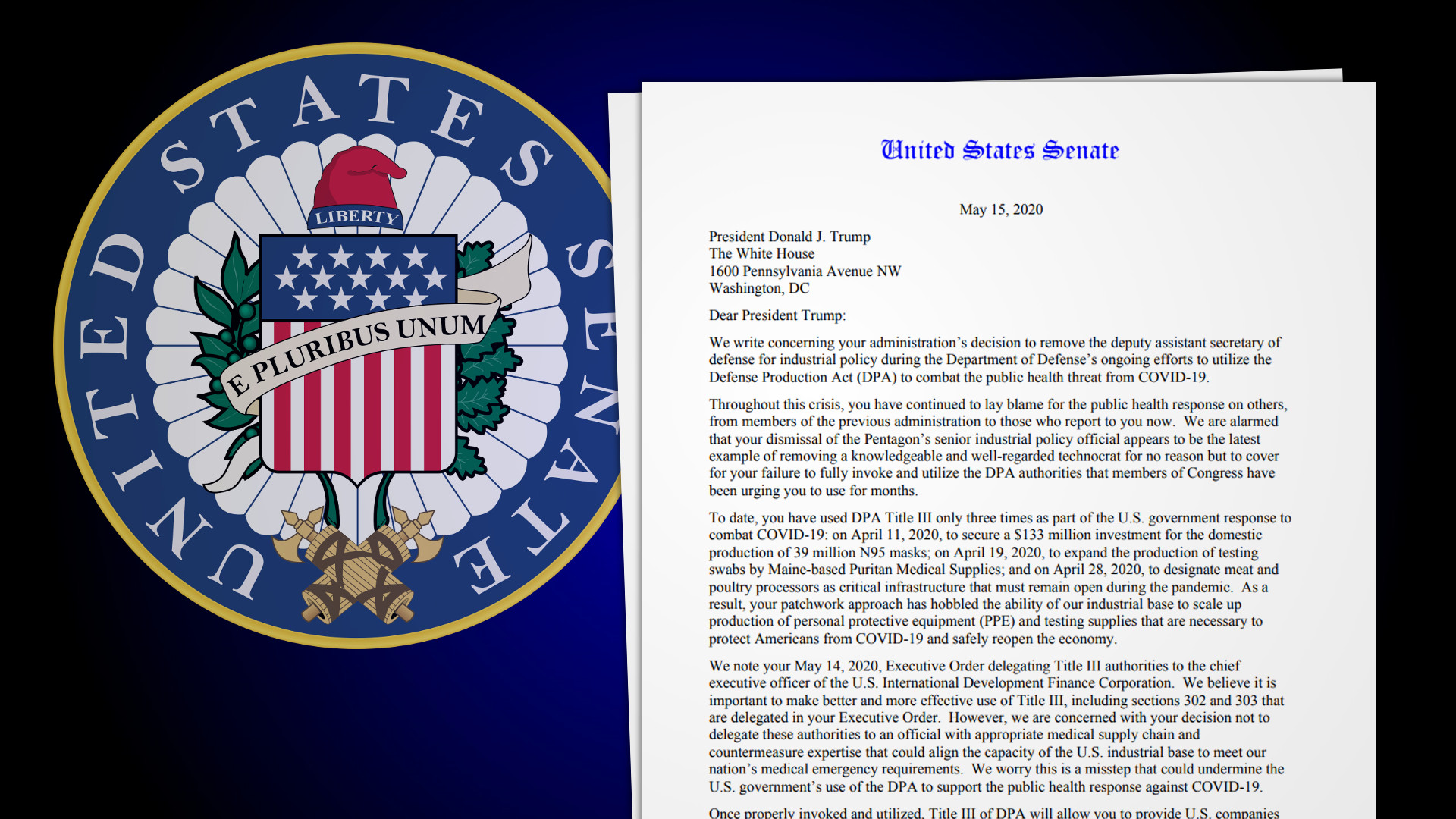 Sen. Brian Schatz and three others senators are calling for President Trump to “stop leveling blame on others for his mismanagement of the public health response to the COVID-19 pandemic”, and say Trump’s decision to fire the Pentagon’s point person for the Defense Production Act, or DPA, yesterday “appears to be another attempt to cover up his failure to fully invoke and utilize the DPA to help fight the coronavirus.”

The President has invoked Title III of the DPA only three times as part of the U.S. government response to combat COVID-19, Sen. Schatz says, an approach that “has weakened the federal government’s ability to scale up production PPE and testing supplies that are necessary to protect Americans from COVID-19 and safely reopen the economy,” the Hawaiʻi senator says.

Here is the full text of the letter to the President:

We write concerning your administration’s decision to remove the deputy assistant secretary of defense for industrial policy during the Department of Defense’s ongoing efforts to utilize the Defense Production Act (DPA) to combat the public health threat from COVID-19.

Throughout this crisis, you have continued to lay blame for the public health response on others, from members of the previous administration to those who report to you now. We are alarmed that your dismissal of the Pentagon’s senior industrial policy official appears to be the latest example of removing a knowledgeable and well-regarded technocrat for no reason but to cover for your failure to fully invoke and utilize the DPA authorities that members of Congress have been urging you to use for months.

To date, you have used DPA Title III only three times as part of the U.S. government response to combat COVID-19: on April 11, 2020, to secure a $133 million investment for the domestic production of 39 million N95 masks; on April 19, 2020, to expand the production of testing swabs by Maine-based Puritan Medical Supplies; and on April 28, 2020, to designate meat and poultry processors as critical infrastructure that must remain open during the pandemic. As a result, your patchwork approach has hobbled the ability of our industrial base to scale up production of personal protective equipment (PPE) and testing supplies that are necessary to protect Americans from COVID-19 and safely reopen the economy.

We note your May 14, 2020, Executive Order delegating Title III authorities to the chief executive officer of the U.S. International Development Finance Corporation. We believe it is important to make better and more effective use of Title III, including sections 302 and 303 that are delegated in your Executive Order. However, we are concerned with your decision not to delegate these authorities to an official with appropriate medical supply chain and countermeasure expertise that could align the capacity of the U.S. industrial base to meet our nation’s medical emergency requirements. We worry this is a misstep that could undermine the U.S. government’s use of the DPA to support the public health response against COVID-19.

Once properly invoked and utilized, Title III of DPA will allow you to provide U.S. companies with the financing and equipment to expand production capacity of PPE, testing swabs and reagents, and components for vaccines and therapeutics to more than 300 million Americans, while guaranteeing a buyer for these products once that capacity is ramped up. That is why Congress appropriated $1 billion in the Coronavirus Aid, Relief, and Economic Security Act to support expansion of the domestic production of medical supplies and equipment under DPA. As always, we stand ready to provide additional funding as it becomes necessary.

In short, DPA, when fully invoked and utilized, offers the most effective means to scaling up production of and meeting the demand for PPE and testing supplies that are critical to protecting Americans and providing states the equipment they need to safely reopen. We urge you to vest the responsibility for discharging these authorities with officials that have the right expertise to accomplish the mission. Continuing to implement DPA on an ad hoc basis, mismanaging the delegation of these authorities, or removing industrial base policy experts without cause will leave our industrial capacity ill equipped to meet the challenges ahead, putting the health and financial well-being of all Americans at continued risk. The fault will rest solely with you.