video courtesy the State of Hawaiʻi, edited by BIVN 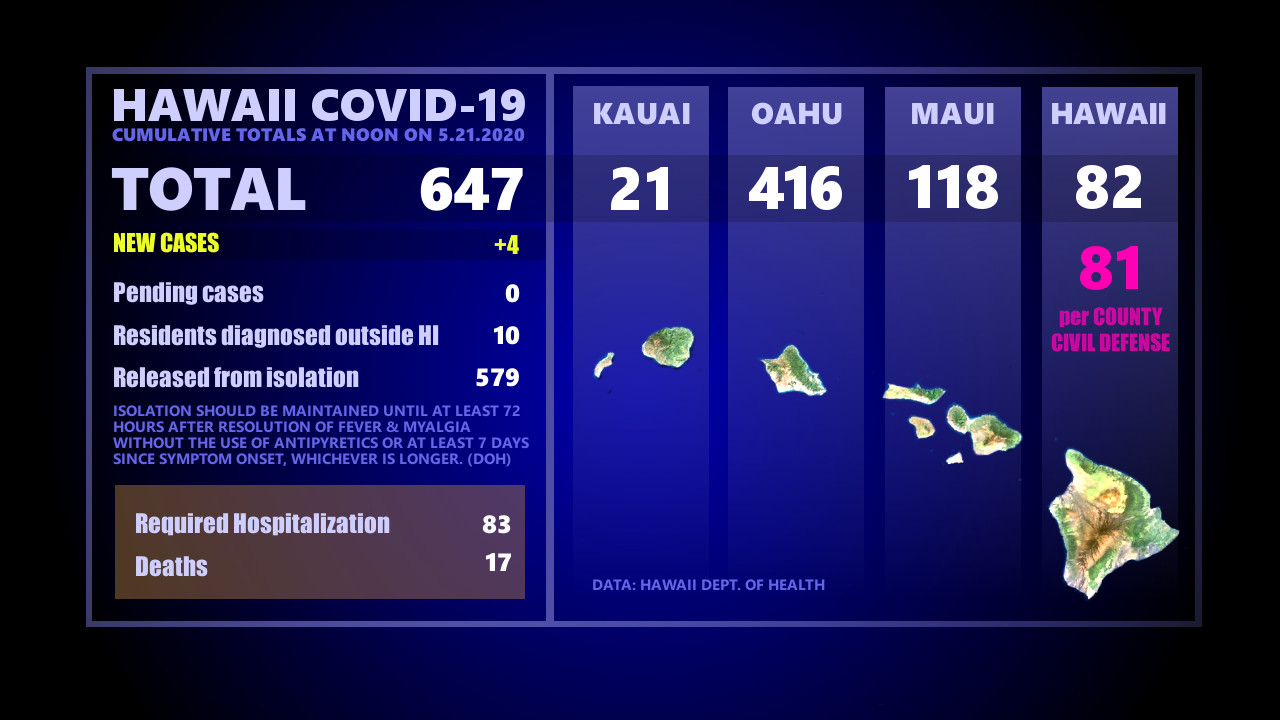 (BIVN) – The State of Hawaiʻi reported 4 new cases of COVID-19 statewide today. 3 of those cases were identified on the Big Island, and 1 new case was identified on Maui.

The State’s noon update brings the total number of cases on Hawaiʻi island to 82, which is one more than the 81 the County reported earlier in the day. Of the 82 total cases, 76 have been released from isolation, the health department says.

“We’ve seen over the last couple of weeks that we’ve been able to keep the case numbers very, very low. The lowest in the country. And I am very pleased with that,” said Dr. Bruce Anderson, the director of the Hawaiʻi Health Department, during a Thursday news conference. “But we are going to see new cases,” he added.

“We’ve seen today 4 cases. 2 of those were among family members. Not unexpected. And 2 are still under investigation. So there’s still a limited community spread and we are going to see clusters from time to time. But our real strength is being able to to identify the cases quickly, and the contacts, and of course, be able to isolate and quarantine those as we go.”

When asked for greater specificity as to where on Hawaiʻi island the new cases are located, Dr. Anderson answered that 2 of the cases were family members, or “people who have been living with a confirmed case”, and one case is still under investigation.

“I’m not sure exactly where the case is right now,” Anderson explained. “We’ve had cases recently in Hilo – residents of Hilo – and other places on the Big Island, including the South Kona District. And we’ve seen cases on Oʻahu.”

“I think the important thing to remember is that we are seeing sporadic cases in the state, which are probably associated with some community spread and unfortunately most of those are associated with known clusters,” Dr. Anderson added. “And we can identify pretty much where who-infected-who in these situations. But everything is limited here, and – we believe – very much under control. We haven’t seen any situations develop like they have on the mainland, where you have hundreds of cases springing up in a community and they simply are overwhelmed with the number of cases and aren’t able to do the contact tracing and so forth.”