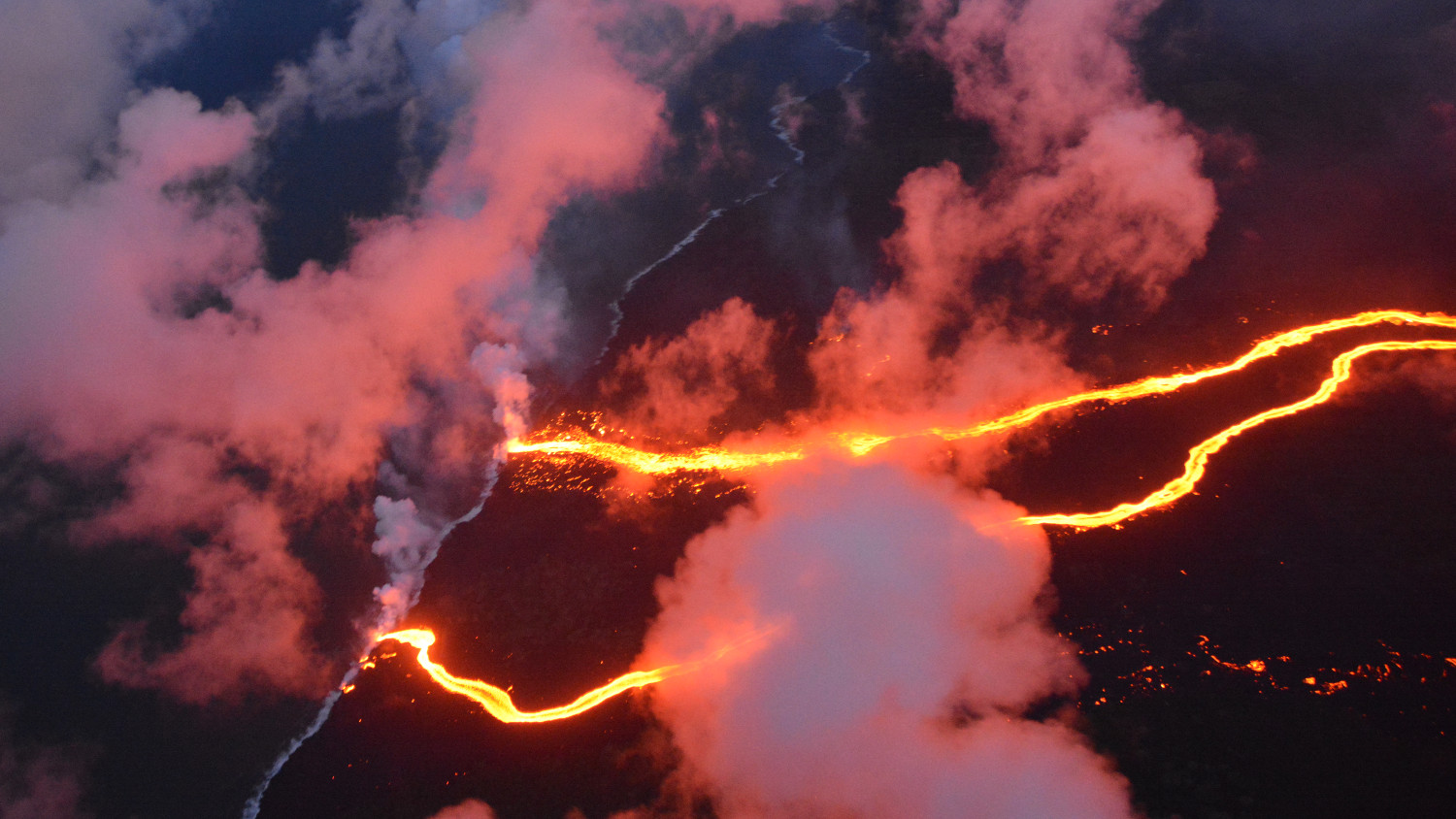 On May 23, 2018, the Hilo Civil Air Patrol captured this evening photograph of the coastline where lava flows are entering the sea. There are currently three primary ocean entry points, which have evolved over the course of the eruption. Photo courtesy of J. Ozbolt, Hilo Civil Air Patrol.

VOLCANO WATCH: Notable Kilauea Anniversaries At The End Of May

HAWAIʻI ISLAND - The USGS Hawaiian Volcano Observatory reflects on several notable Kīlauea eruption beginnings, changes, and endings that happened at the end of May in years past. 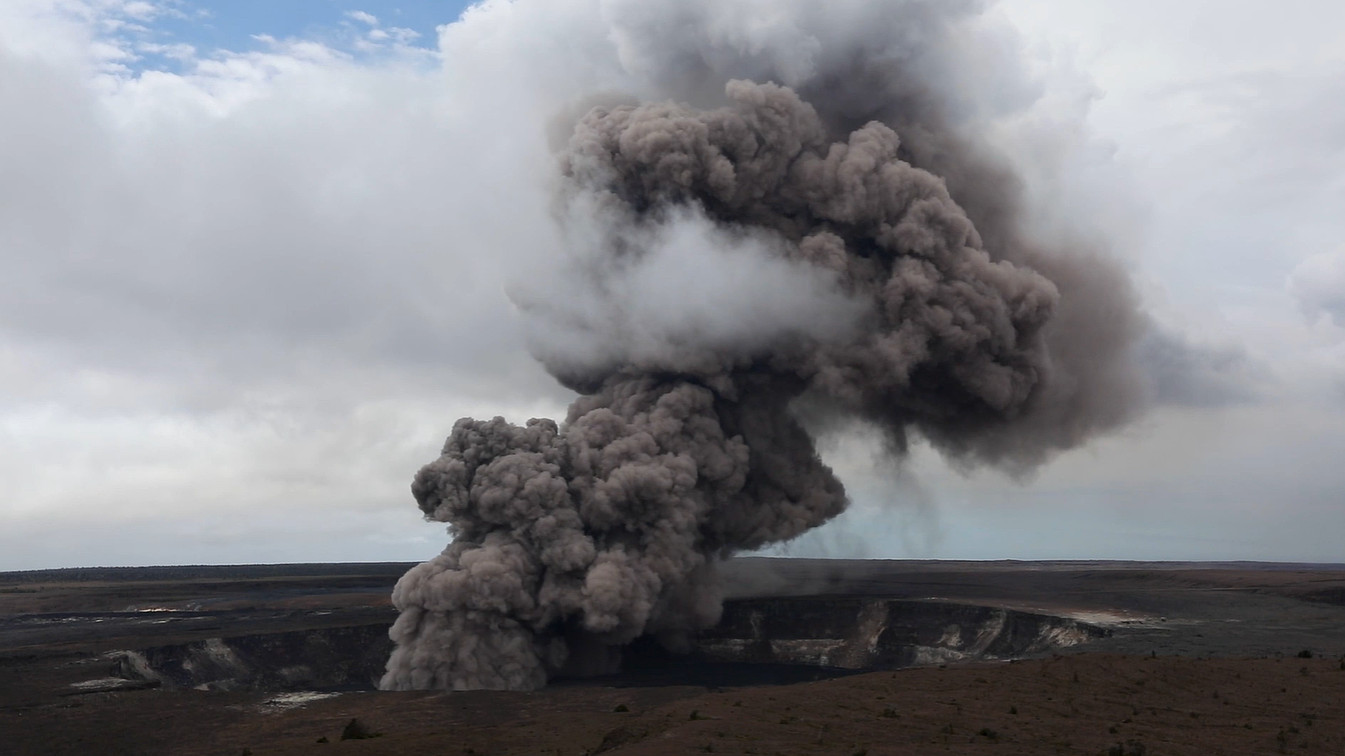 Kīlauea summit ashcloud on May 9, 2018. Image from NPS video by Janice Wei.

Several notable Kīlauea anniversaries occur at the end of May

The past two years of “Volcano Watch” articles from late May focused on commemorating the 49th and 50th anniversaries of the Mauna Ulu eruption. However, the end of May has several other notable Kīlauea eruption beginnings, changes, and endings. Here we reflect on some selected anniversaries spanning 1823–2018.

The first eruption of Kīlauea documented by western missionaries was described in Ellis’s account of the 1823 eruption. A 6-mile-long fissure called “the Great Crack” produced the Keaīwa Flow on the lower Southwest Rift Zone sometime in early summer (month unknown). A now seldom-visited part of Hawai‘i Volcanoes National Park, Hawaiians described to Ellis that “Pele had issued from a subterranean cavern and overflowed the lowland… the inundation was sudden and violent, burnt one canoe, and carried four more into the sea. At Mahuku [Bay], the deep torrent of lava bore into the sea…” This description emphasized the importance of eyewitness accounts of volcanic activity. 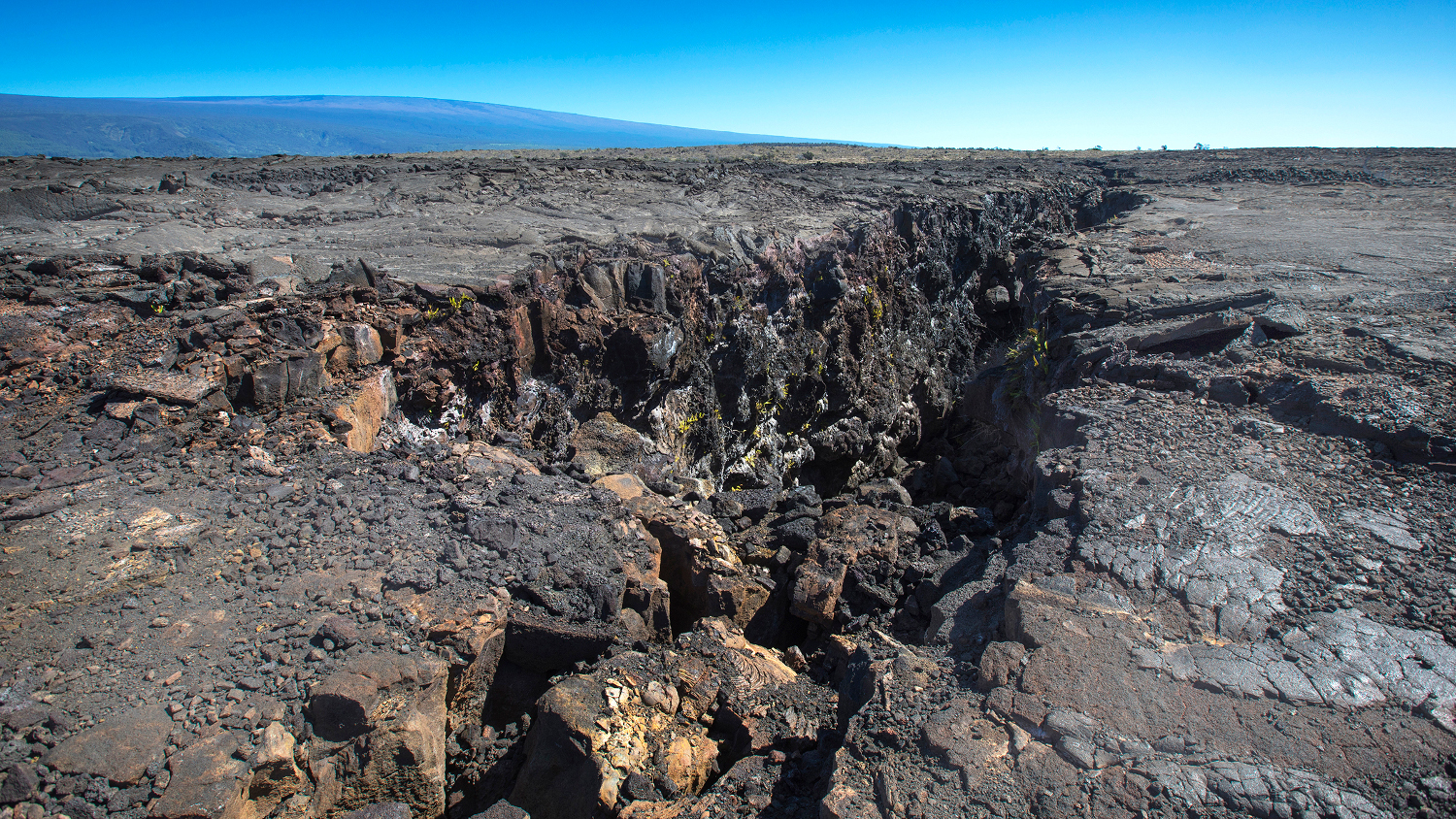 The 1840 eruption in lower Puna began on May 30 and lasted for 26 days. Nānāwale Estates is built on the lava flow from this eruption. Few eyewitness accounts exist of this eruption, which emphasized the importance of geological field work to reconstruct the chronology of events that occurred. Geologic mapping indicated 1840 may have been similar to the 2018 eruption.

In 1922, ten years after the Hawaiian Volcano Observatory was founded, a fissure eruption began around 9 p.m. on May 28 in Makaopuhi and Nāpau craters on Kīlauea’s East Rift Zone. The distinctive red glow of an eruption was observed from Uēkahuna Bluff an hour after a strong “swaying” earthquake. HVO scientists drove for 30 minutes and then hiked 3 hours (from 10 p.m. to 1 a.m.) to reach Makaopuhi. The next day, another field party approached from the east and saw weak spattering in Nāpau Crater before reaching Makaopuhi Crater. Both teams endured hours of jungle bushwhacking to reach the eruption sites.

The explosive 1924 eruption of Halemaʻumaʻu lasted 17 days and ended activity on May 28. In an interesting coincidence, Halemaʻumaʻu unleashed a large ash cloud that resulted in a single fatality on May 18, 1924 — a day later associated with the famous Mount St. Helens eruption. 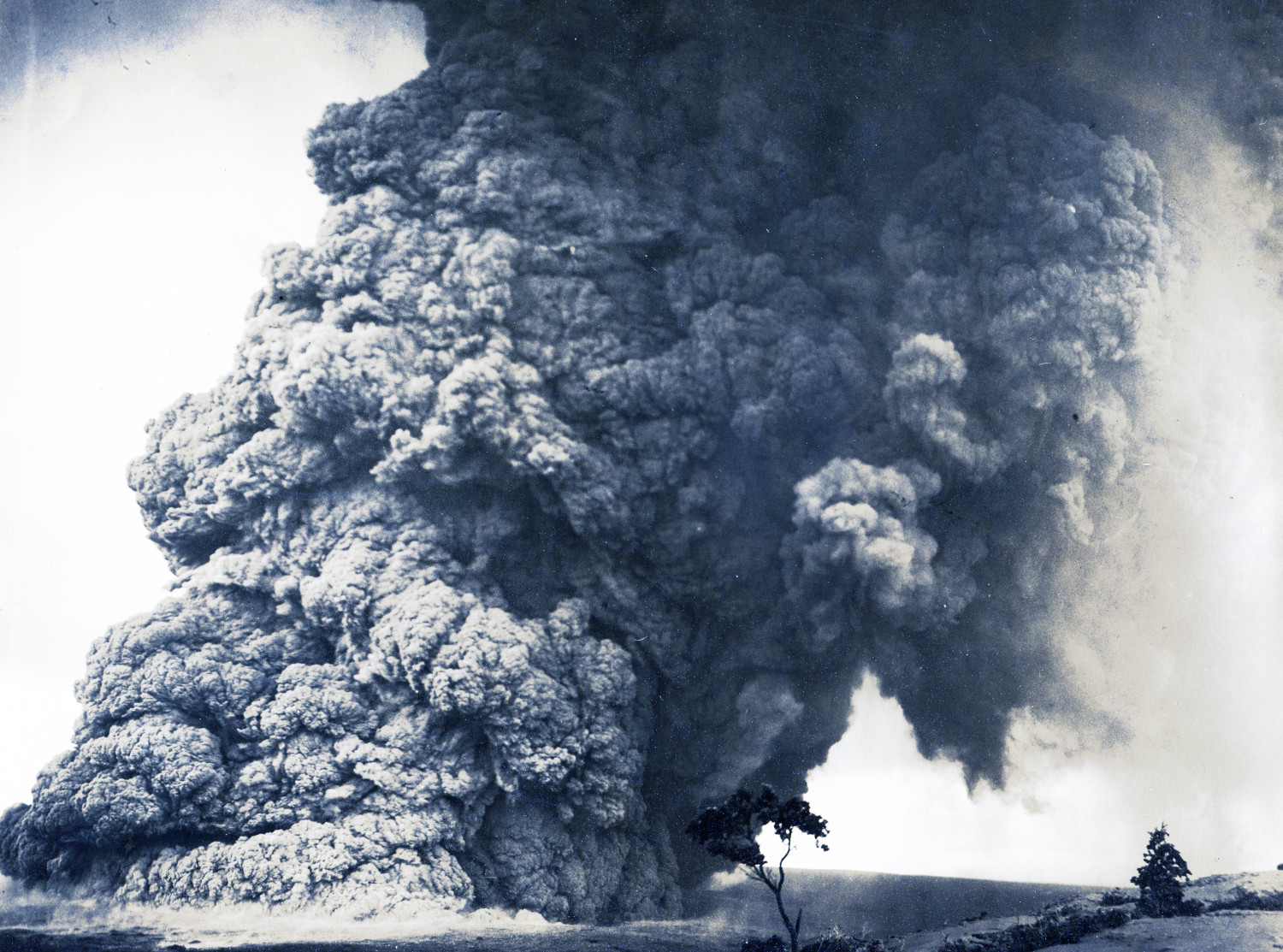 Explosive eruption column from Halema‘uma‘u Crater 11:15 a.m. May 18, 1924 – one of many in a series of similar events during May 11-27. Photo from northwest rim of Kīlauea summit, present site of HVO.

A 1954 anniversary occurs on May 31 for a 3.5-day-long fissure eruption in Halema’uma’u crater. This eruption was one of the first at Kīlauea to be “anticipated” through geophysical monitoring. HVO scientists had noted signs of increasing pressurization at the summit and stated that “under such conditions, an eruption might come with very little forewarning.” They were right. The first earthquake woke residents at 03:42 a.m., seismic tremor started at 04:09 a.m., and at 04:10, there was red glow in the sky. 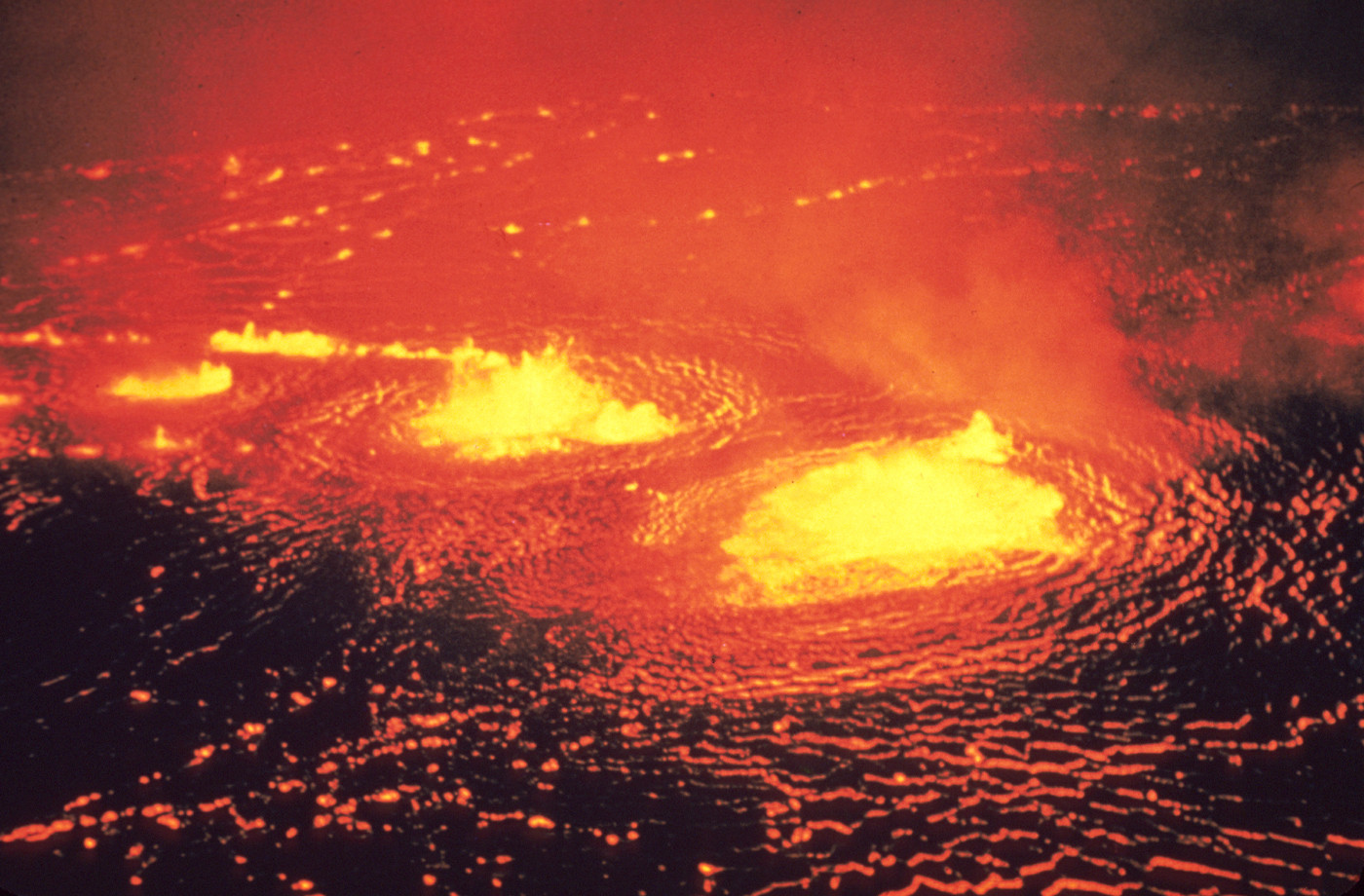 The 1955 lower Puna eruption ended on May 26 after 88 days of activity in the same area as the recent 2018 eruption. This eruption devastated farmland and isolated Kapoho Village. 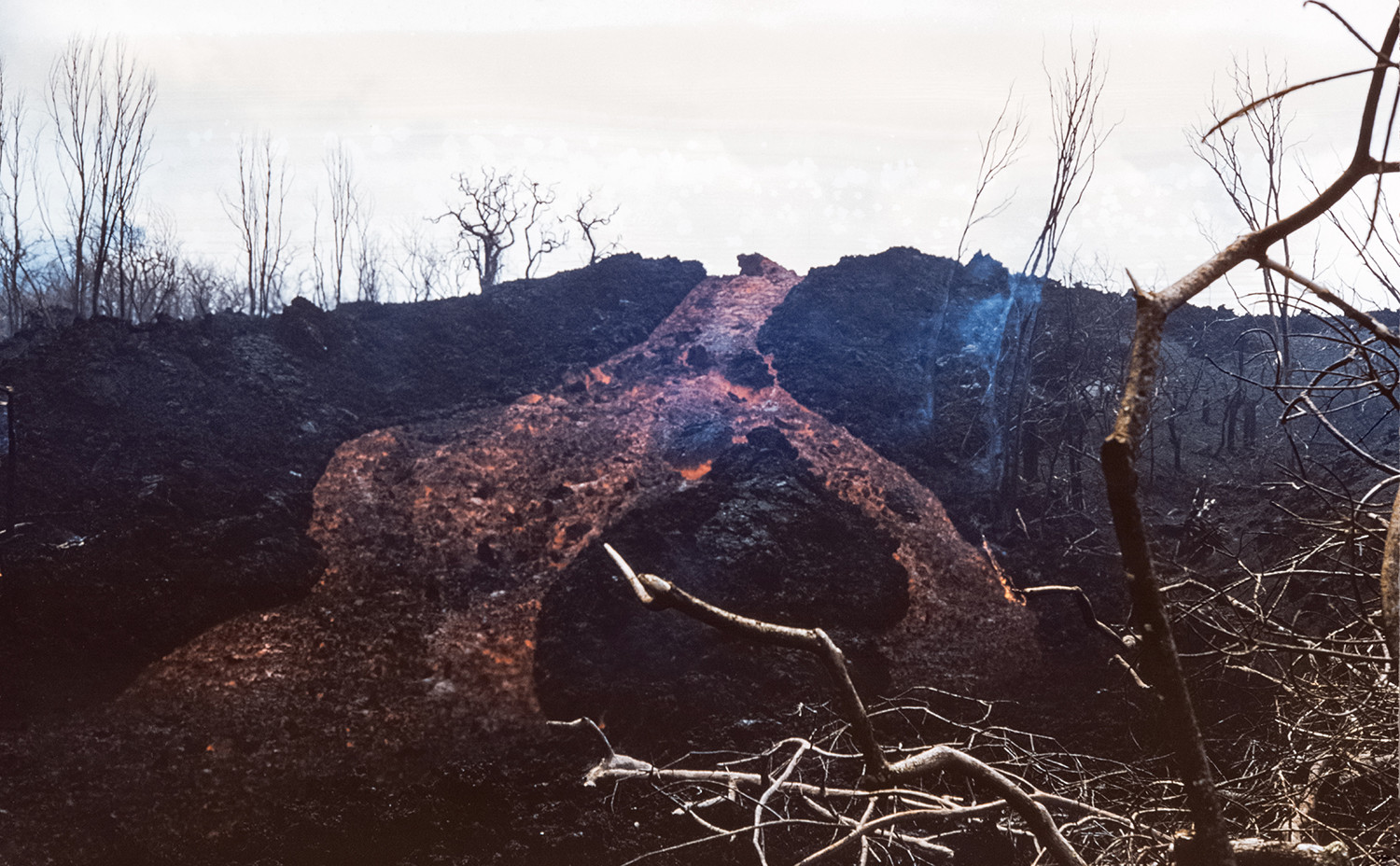 Mauna Ulu began erupting on Kīlauea’s upper East Rift Zone on May 24, 1969. It followed a decade of short-lived fissure eruptions and HVO staff suspected it would be another week-to-month-long event. However, activity focused at a single vent between the now buried ‘Alae and ʻĀlo’i craters and continued there almost continuously for 4.5 years. This sustained activity allowed HVO staff to document, study, and understand volcanic processes in great detail. Specifically, the eruption advanced understanding of how lava flows advance and inflate, the effect of lava velocity and slope on flow textures, gas-pistoning behavior, and the formation of pillow basalts when lava flows into the ocean. 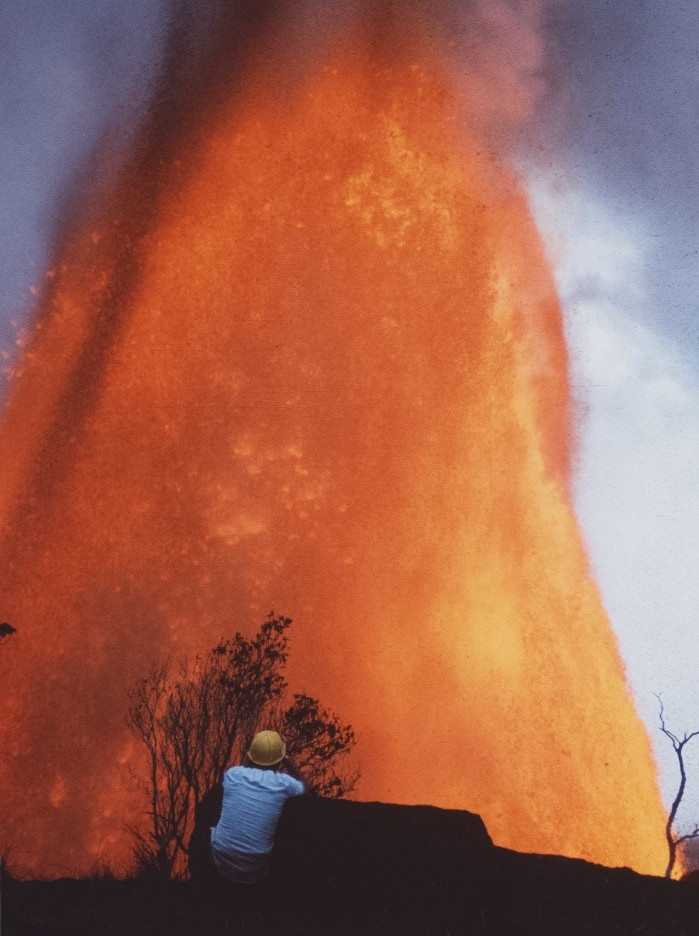 HVO scientist measures the episode 12 lava fountain height at Mauna Ulu from Puʻu Huluhulu on Dec 30, 1969. The Mauna Ulu eruption marks its 51st anniversary on May 24, 1969. (above photo by Hans-Ulrich Schmincke.)

During the 2018 lower East Rift Zone eruption, fissure 8 reactivated for a final time on May 24 and was joined briefly on May 27 by the final fissure (#24) opening. In the evening of May 27, the main fissure 8 lava flow began its advance towards the ocean. This eruption was arguably the best-documented eruption at Kīlauea yet, with the existing geophysical network, new instruments rapidly deployed, 24/7 field presence for 6 months, use of new tools like Unoccupied Aerial Systems (UAS), and an outpouring of citizen science. 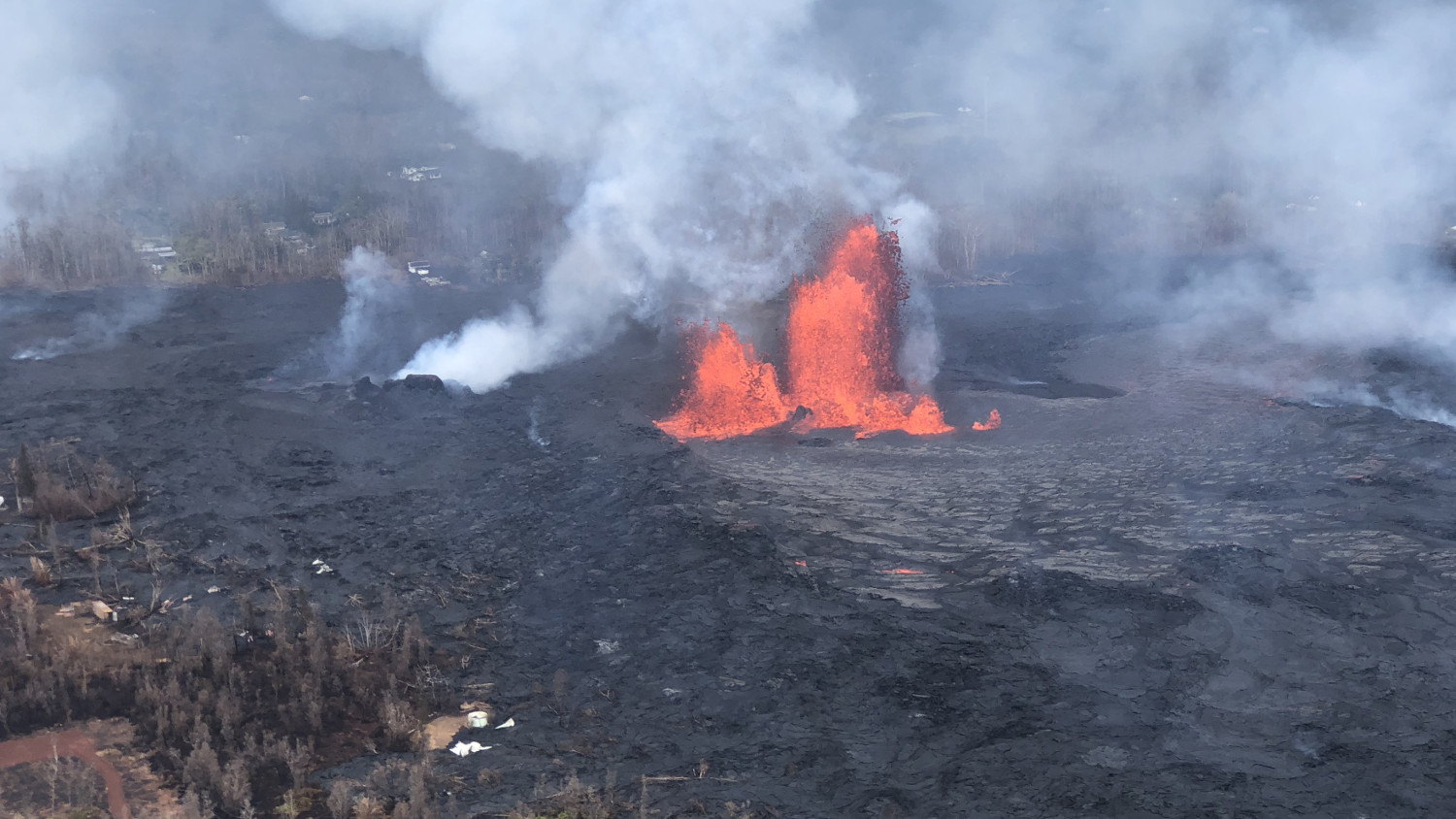 Fissure 8 reactivated on the afternoon of May 28, when, at times, lava fountains were reaching heights of 200 feet and feeding a lava flow that advanced to the northeast.

Kīlauea has had a long and active history, and each eruption provides us new insights into volcanic processes and hazards. HVO will continue to make observation-based discoveries to improve delivery of warnings and hazard assessments.