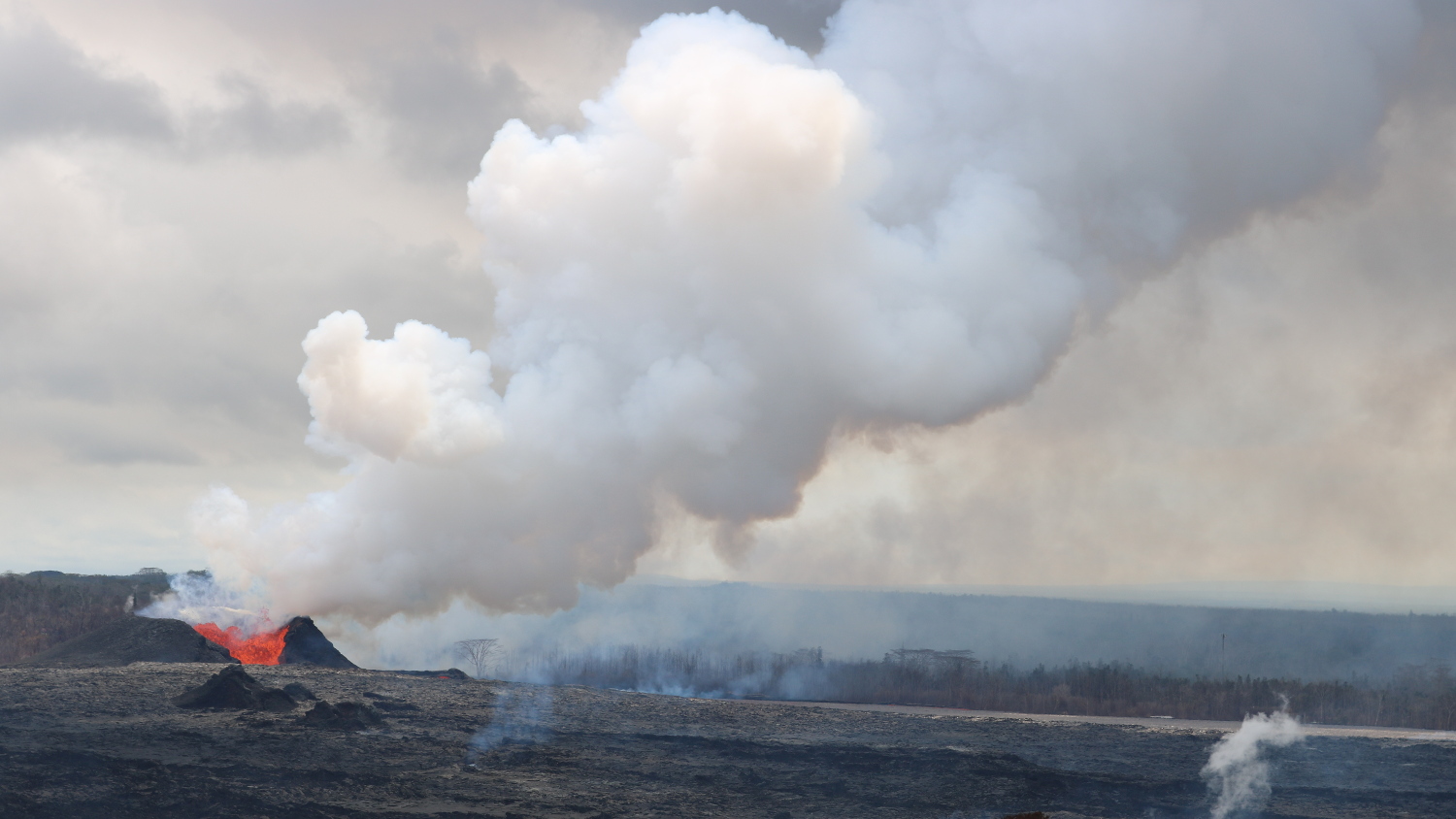 A thick, dense plume of SO2 and other volcanic gases billows from the lava fountains at fissure 8 on June 19, 2018. SO2 emission rates during the 2018 eruption of Kīlauea were so high that they required a new data analysis technique. USGS photo by P. Nadeau.

VOLCANO WATCH: The Extreme SO2 Emissions During 2018 Kilauea Eruption

HAWAIʻI ISLAND - After re-processing all measurements, data has revealed that for much of June and early July of 2018, the highest SO2 emission rates ever recorded were measured at Kīlauea.

(BIVN) – Kīlauea Volcano is not erupting, and its USGS Volcano Alert level remains at NORMAL. There have been only minor geologic changes at Kīlauea since the end of eruptive activity in September 2018. Scientists are still examining the data collected during the dramatic eruption that occurred before the present quiet.

If you were around the Island of Hawai‘i – or even other Hawaiian Islands, or Guam! – between May and August of 2018, you likely know that Kīlauea’s lower East Rift Zone (LERZ) eruption released a lot of sulfur dioxide (SO2). But how much is a lot?

Early in the eruption, HVO reported SO2 emission rates of 15,000 t/d (tonnes/day) of SO2. As this was already three times the 5000 t/d average of the past few years, it seemed very high!

Yet even then, we realized that there was so much SO2 that traditional measurement methods could not adequately quantify the emissions. To measure SO2 emission rates, volcanologists use a device called a spectrometer. The instrument is mounted to a vehicle or aircraft, which passes under the SO2 plume and measures absorption of sunlight by SO2 overhead. The more SO2, the less ultraviolet (UV) light that reaches the spectrometer. In 2018, there was so much SO2 that the spectrometer could barely detect any UV light at all, which made it difficult to determine the exact amount of gas overhead.

Think of it this way – a thin fabric curtain over your window blocks some sunlight. Add a second layer of fabric, and more light is blocked. Add a third and fourth layer, and it gets darker still. Maybe by seven or eight layers of curtains, no sunlight comes through anymore. At that point, if you added ten more curtains, or a hundred more curtains, it wouldn’t matter—after seven or eight, all the light is already blocked.

That’s the situation we encountered in 2018. We knew that more than 15,000 t/d of SO2 were being emitted, but it was hard to say just how much more.

Luckily, the spectrometer measures UV light over a range of wavelengths. Normally, with low SO2 emissions, we examine wavelengths where SO2 absorption is significant, which allows us to detect even very small amounts of gas. But 2018 was different—essentially no light was reaching the instrument. We then examined a part of the UV spectrum where SO2 absorption is 500 times weaker, so some UV light would still be detectable. Kind of like switching to clear plastic shower curtains to block light at your window. Twenty fabric curtains would block all the light, but twenty clear plastic curtains will still let in light.

The new results were startling! After re-processing all measurements in the new wavelength range, the data revealed that for much of June and early July of 2018, fissures in the LERZ emitted nearly 200,000 t/d of SO2!

These are the highest SO2 emission rates measured at Kīlauea using the UV spectrometer technique, which began in the late 1970s. Early Pu‘u ‘Ō‘ō high lava fountains, and perhaps Mauna Loa’s 1984 eruption, may have had similar emission rates, but those measurements likely suffered from the same underestimation as our initial 2018 analyses. Unfortunately, because of older spectrometer technology, data from the 1980s cannot be reprocessed in the same way as 2018 data.

We now estimate that the 2018 eruption emitted over 10 Mt (megatonnes, or millions of tonnes) of SO2 between May and early August. In those three months alone, Kīlauea emitted five times the SO2 it emitted in all of 2017. Few recent eruptions on Earth have released that much SO2, and when they do, they are generally large explosive eruptions at stratovolcanoes.

Most similar to Kīlauea’s eruption was the 2014 Holuhraun fissure eruption in Iceland, which also emitted about 10 Mt of SO2, though in 6 months rather than just 3. For comparison, the largest volcanic eruption of the past century, Mount Pinatubo in the Philippines in 1991, only released about twice the SO2 mass of Kīlauea’s 2018 eruption, albeit explosively on a single day.

Since the extremely high emissions in 2018 ended, Kīlauea has been releasing far less SO2. By late 2018, SO2 emissions were about 30 t/d at the summit and Pu‘u ‘Ō‘ō, and near-zero in the LERZ. By early 2019, Pu‘u ‘Ō‘ō had dropped to near-zero levels as well. And though some additional SO2 is dissolving into the new lake in Halema‘uma‘u Crater, current emission rates are the lowest we have seen at Kīlauea in over 30 years of measurements.