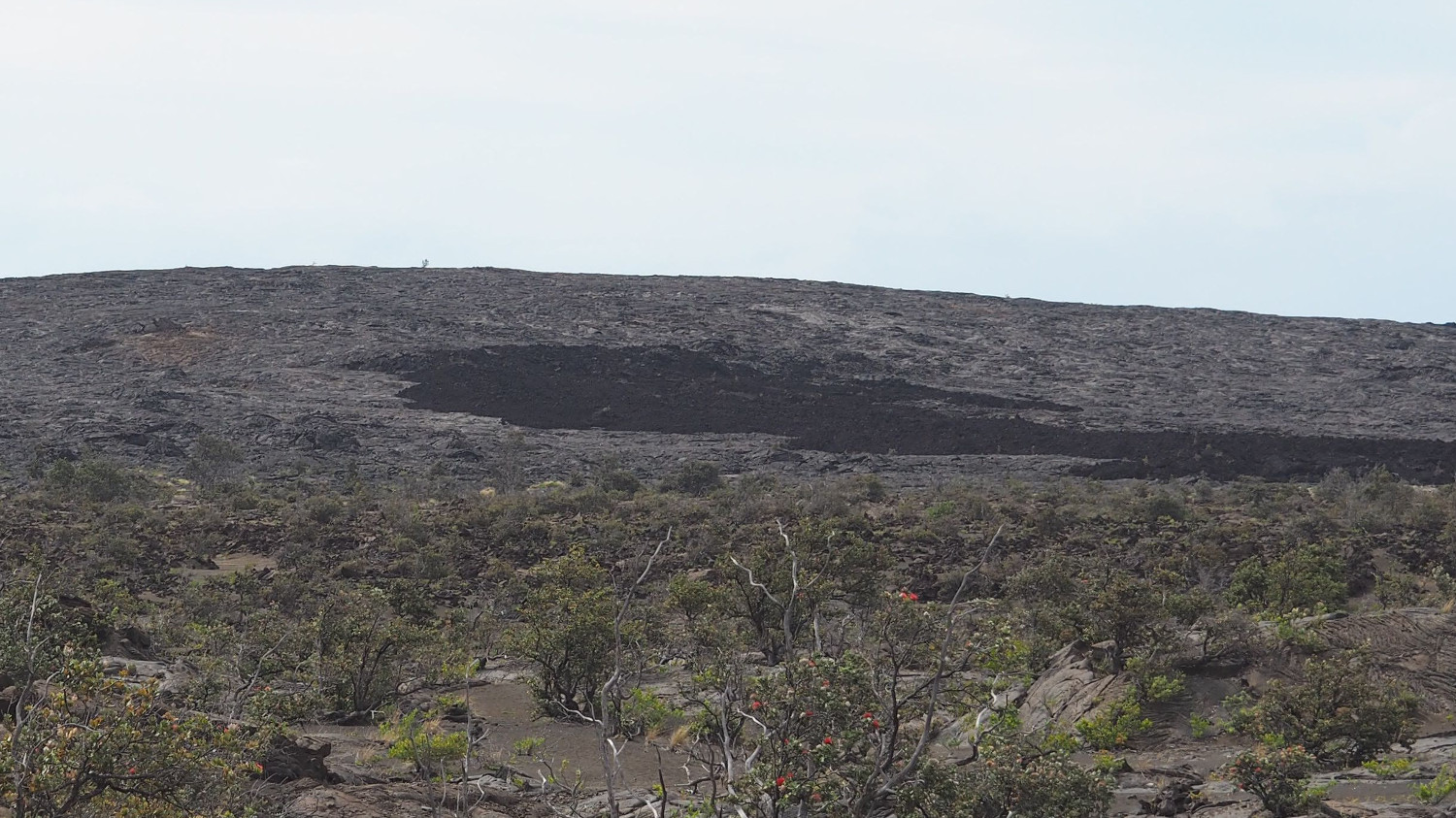 "Mauna Iki, viewed toward the south from the Ka‘ū Desert trail inside Hawai‘i Volcanoes National Park. Note the very gentle profile, which mimics that of a standard Hawaiian shield volcano. The distinct dark flow is ‘a‘ā, and its source is a slightly up-raised area of broken pāhoehoe slabs. Lava must have moved within the shield and accumulated beneath the surface. By the time it broke out, it had cooled to the point that it could no longer flow as pāhoehoe and instead formed ‘a‘ā." (USGS HVO, photo courtesy of S. Rowland)

HAWAIʻI ISLAND - One hundred years ago, as the world suffered from another pandemic, Kīlauea Volcano was erupting.

As many people have noted, the last global pandemic was raging one hundred years ago. Kīlauea was erupting 100 years ago, although it was certainly not quite as significant of an event on the world stage.

This eruption a century ago produced the Mauna Iki (“little mountain”) lava shield on Kīlauea’s Southwest Rift Zone. It started in December 1919 and ended in early August 1920. The eruption was monitored by the entire staff of (2!) geologists at the then seven-year-old Hawaiian Volcano Observatory (HVO). Their detailed notes and measurements have allowed geologists in more modern times to piece together both surface and subsurface events into a coherent story. This rift zone eruption coincided with lava-lake activity in Halema‘uma‘u, and overall bears some resemblance to the dramatic Kīlauea events of 2 years ago, although far less damaging.

In late November 1919, the long-lived Halema‘uma‘u lava lake stood at a high level, and in fact frequently overflowed onto the main caldera floor. Suddenly, on November 28, it drained away completely without earthquakes, leaving an empty pit almost 200 meters (660 feet) deep.

Over the next couple of weeks, lava returned and filled Halema‘uma‘u almost to the rim again. On December 15, an eruption on the caldera floor just southwest of Halema‘uma‘u produced a small lava flow. More significantly, surface cracks opened in a southwesterly direction outside the caldera to a distance of 10 kilometers (6 miles) down the rift zone. Magma was observed not far below the surface in these cracks, so it was obvious that a dike of molten rock was propagating down the rift zone.

This brief summit eruption and propagating dike are considered stage 1 of the Mauna Iki eruption, which lasted until December 23. Stage 2a started December 24 and consisted of low lava fountains at what was to become the Mauna Iki vent. This activity produced a low ridge of shelly pāhoehoe, a small lava shield, and a few other pads of lava, and coincided with a drop in the level of the Halema‘uma‘u lake. The combined erupted volume was essentially equal to the volume lost from Halema‘uma‘u, indicating that lava was probably draining passively through the dike downrift to the eruption site.

Stage 2b started December 30 and involved a significant breakout of lava from within the low ridge, producing an ‘a‘ā flow that initially advanced almost 6 kilometers per day (almost 4 miles/day), but soon slowed. It reached an eventual length of 11 kilometers (about 7 miles) by the time it stopped moving on January 17, 1920.

Stage 3 lasted from January 18 to April 16, and it was during this time that the main Mauna Iki lava shield was built by the accumulation of numerous pāhoehoe overflows from a small lava pond at the top of the shield. The shield also grew internally when lava leaked from the lava pond and forced its way between layers beneath the surface, bulging the surface upward, and often breaking out as small ‘a‘ā flows.

Stage 4 started in mid-April when lava tubes developed, and the shield stopped growing higher. Instead, lava flowed in these tubes to feed a downrift pāhoehoe flow that paralleled, and in places buried, the stage 2b ‘a‘ā flow.

At the start of this final stage, Halema‘uma‘u lake activity switched from filling to draining, losing lava at a volumetric rate almost identical to that of the advancing tube-fed pāhoehoe flows, suggesting simple draining from the summit reservoir system downrift to Mauna Iki. The tube-fed pāhoehoe flows advanced until August 3, when the eruption ended.

Only because of detailed field observations and summit measurements by HVO’s Thomas Jaggar and Ruy Finch are we able to piece together this chronology. They even devised a way to measure ground tilt without a tiltmeter by observing the systematic drift of their seismograph needles. It is hard to imagine, but geologists 100 years in the future will almost certainly be pouring over the notes and data collected during the 2018 eruption, and they will be thankful for the modern-day geologists who put in such long hours and days during that historic event.