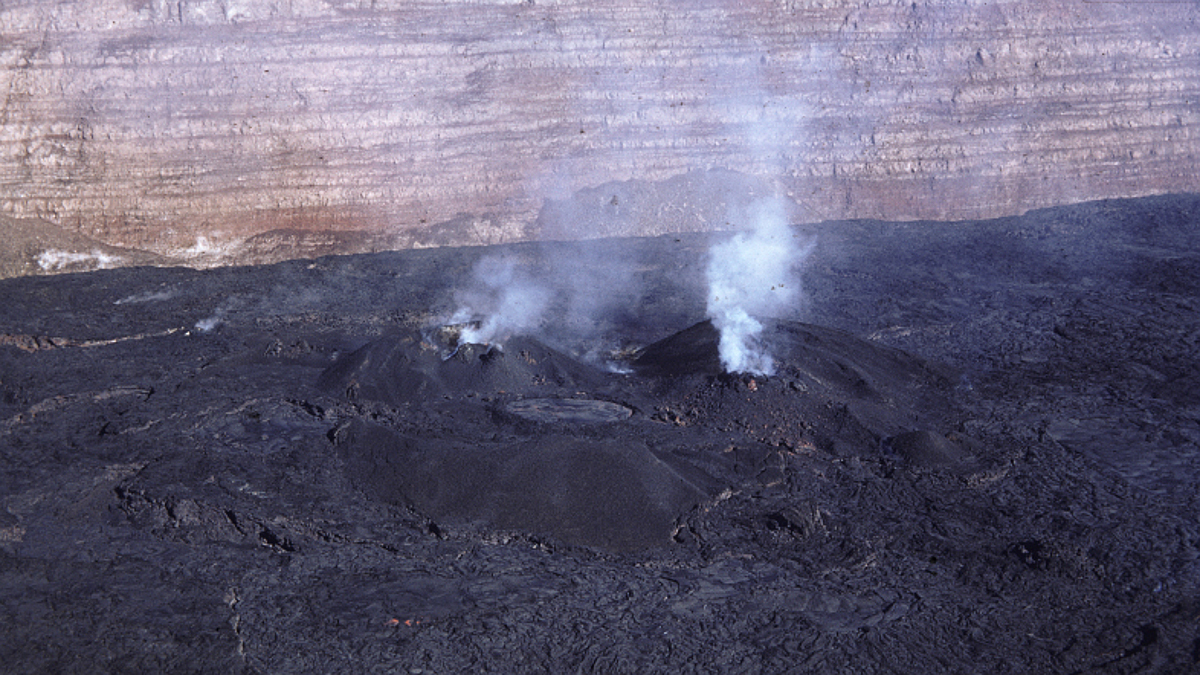 Two small spatter cones, within a larger cone, are outgassing on the floor of Halema‘uma‘u Crater. A lava pond, approximately 30 m (100 ft) in diameter, is visible between the small cones. This photograph is looking westward, taken from the southeastern rim of the crater by G. Macdonald on August 27, 1952.

HAWAIʻI VOLCANOES NATIONAL PARK - In June of 1952, nearly 18 years of quiescence at Kīlauea Volcano ended with a summit eruption.

(BIVN) – Kīlauea is not erupting, and has been quiet for about 21 months. The volcano remains active, however, and it will erupt again. “Although we expect clear signs prior to the next eruption, the time frame of warning may be short,” the USGS Hawaiian Volcano Observatory writes in every Kīlauea activity update.

How long can the quiet last? The weekly Volcano Watch article from the USGS HVO scientists and affiliates provides some perspective. Today’s article is by HVO Research Corporation of the University of Hawai‘i geologist Lil DeSmither:

On June 27, 1952, an eruption started at the summit of Kīlauea Volcano, ending a period of quiescence that had lasted nearly 18 years.

During the nearly two decades of quiet on Kīlauea following a summit eruption in 1934, there were several periods of increased earthquake activity and deformation beneath the summit. However, none of these phases of unrest resulted in an eruption.

Early in April 1952, a series of earthquakes began along Kīlauea’s East Rift Zone and beneath the summit. The earthquakes, accompanied by summit inflation, persisted through May and June.

At approximately 11:40 p.m. on June 27, an eruption commenced at the summit. A loud roaring and bright glow emanating from Halema‘uma‘u Crater alerted residents and staff in proximity to Kīlauea Caldera of the new eruption.

Within minutes of the eruption onset, Hawaiian Volcano Observatory (HVO) staff were on their way to the office located on Uēkahuna bluff. From HVO, a fountain erupting on the southwestern edge of the Halema‘uma‘u Crater floor was visibly over-topping the crater rim, nearly 245 m (800 ft) higher. The fountain quickly waned and by 11:55 p.m. was no longer visible from the bluff.

A detailed account of the eruptions early hours can be found in this “Volcano Watch” article.

The lake of lava had plates of cooled crust on its surface separated by cracks that provided views of the incandescent molten lava below—much like the smaller 2008–2018 lava lake within the Halema‘uma‘u “Overlook crater.” The fountaining lava created waves over the surface of the lake that emanated outward from the fissure to the crater walls.

Observers also noted seeing occasional whirlwinds on the lake surface that threw pieces of crust, up to a meter (yard) across, several meters into the air. This same phenomenon was observed in 2018 over the fissure 8 lava channel.

After the initial hours of the eruption, the lava fountains began to subside. After a little more than four hours, only the northeastern quarter of the fissure was active, and observers thought that the eruption could be ending. Shortly after, however, the southwestern end of the fissure reactivated with low bubbling fountains, and by that time Halema‘uma‘u Crater was estimated to have been filled with a lake of lava approximately 15 m (50 ft) deep.

During the first two weeks of the eruption, small lava fountains continued to pop up along the surface of the lava lake.

By July 11 the active length of the fissure had shortened to approximately 120 m (400 ft). Two main fountains persisted and began to build a large cinder and spatter cone within the lava lake. Gaps within the cone wall allowed lava to spill out and feed the surrounding lava lake, which had shrunk from a peak of 40 hectares (100 acres) on June 28 to about 14 hectares (34 acres) by early August. The lava lake within Halema‘uma‘u Crater in early 2018 paled in comparison, at approximately 4.2 hectares (10.4 acres).

By the end of August, most of the erupted lava was contained within the large cone, where two active vents were building smaller spatter cones. Between the two spatter cones, there was a small lava pond that had an average diameter of about 30 m (100 ft).

This continued—with occasional lava flows on the floor of Halema‘uma‘u Crater—for the next few months, until the eruption ended after 136 days on November 10.

After nearly two decades of quiet on Kīlauea Volcano, the 1952 eruption ended the longest eruptive pause on Kīlauea in (at least) the past 200 years.