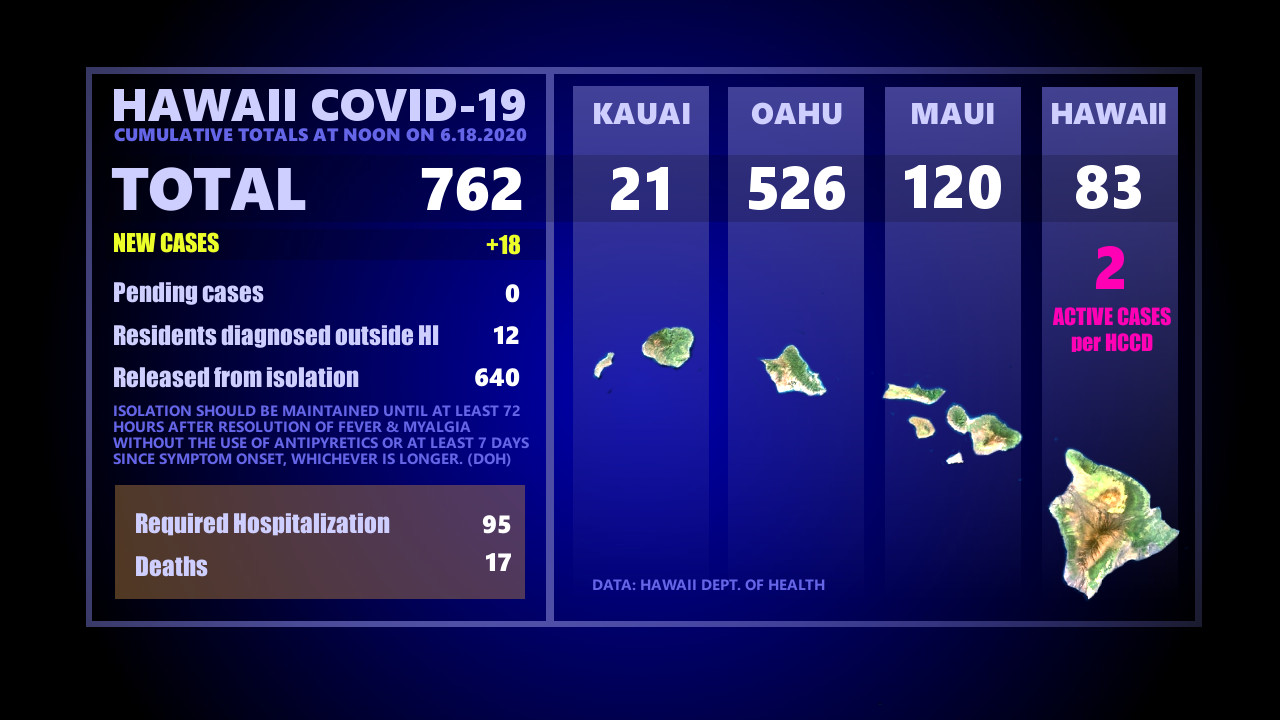 HAWAIʻI - The Hawai‘i Dept. of Health is reporting an additional 18 cases of COVID-19 today, all of which were diagnosed on Oʻahu.

(BIVN) – There was a spike in COVID-19 cases reported by the Hawaiʻi Department of Health at noon on Thursday.

An additional 18 cases of COVID-19 were identified, all of which were diagnosed on Oʻahu. State health officials say fifteen (15) of these new cases are in Hawai‘i residents and the residency of the other three (3) remains under investigation.

“This spike in cases and other recent daily spikes have been expected as people begin to move around more freely and more businesses are reopening,” said State Epidemiologist Dr. Sarah Park in a news release that was issued just before the numbers were posted online. She continued, “It’s important to point out, that the vast majority of the cases we’re seeing in the state are being spread by what we call community-associated infection. Only a handful of recent cases have been detected in travelers, known as travel-associated infection.”

“These steps altogether,” Dr. Park explains, “are the single best things each and every one of us can and should do, not only to protect our own health, but the health of all of our loved ones and particularly our kupuna.”

The State of Hawaiʻi went into more detail on the spike in cases identified on Oʻahu in this media release:

At the Hale Nani Rehabilitation and Nursing Center on O‘ahu, a total of ten (10) cases of coronavirus have been confirmed. Two are workers at the facility and the other eight are residents. Hale Nani implemented aggressive infection control measures as an immediate response to the initial case. Active monitoring and repeat testing is being performed, as recommended by DOH, for all residents and staff. So far 307 tests of staff have come back negative. All but one of the cases identified at the facility, to date, are in people who reside in or work on a single unit.

Dr. Sarah Kemble, Deputy State Epidemiologist explained, “When there has been exposure in a healthcare setting like this, resulting increase in infections are possible and unfortunate, but not unexpected. We could continue to see a number of new cases over the next two weeks.” She went onto to explain that the DOH response has been tiered and focused first on getting residents and workers in the affected unit tested first, followed by testing for the entire facility, and then repeat (serial) testing.

The Hawai‘i House of Representatives confirmed today that a person working at the State Capitol is one of those who tested positive for COVID-19. House leaders say the person wore a mask at work and stayed home when symptoms first developed, so the risk of infection to others is low. The state legislature is scheduled to go back into session next Monday, June 22, though the State Capitol will remain closed to the public.

The health department’s investigation of this case is ongoing. It’s working closely with the legislature to address all concerns and to ensure any close contacts of the positive case are in quarantine and being monitored.

Today marks 12 weeks since the state’s mandatory 14-day self-quarantine started for all passengers arriving in Hawaii from out of state. Yesterday, 1,516 people arrived in Hawaii. During this same time last year, nearly 30,000 passengers arrived in Hawaii daily, including residents and visitors. This table shows the number of people who arrived by air from out of state yesterday and does not include interisland travel. This data was collected from the Hawaii Department of Transportation’s (DOT) Mandatory Travel Declaration Form.