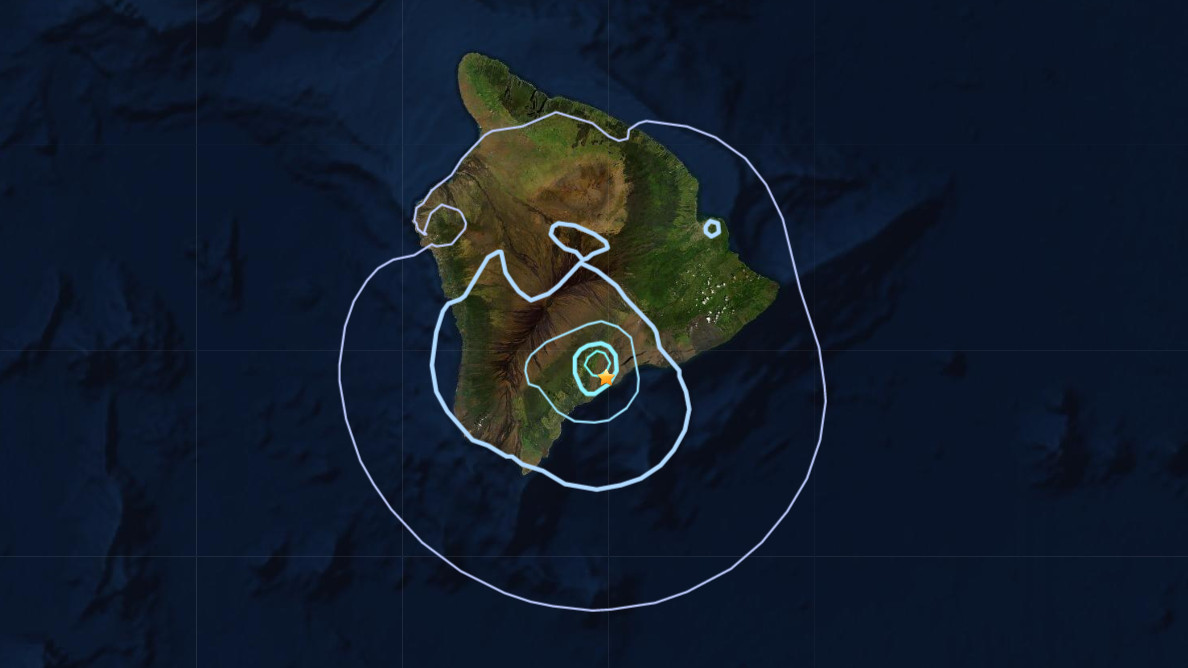 image from interactive map from USGS

(BIVN) – A magnitude 3.6 earthquake, located deep beneath the Pahala-area of Kaʻū, jolted Hawaiʻi island on Saturday.

The earthquake was first measured as a magnitude 4 but was revised downward to a 3.9 shortly after, and then down again to a magnitude 3.6. The quake was felt as a light shaking in Hilo.

The Pacific Tsunami Warning Center issued a statement following the earthquake, saying a tsunami is not expected, although some areas may have experienced shaking.

Recorded at a depth of about 20 miles down, the quake appears to be part of the ongoing seismicity in the area. Scientists with the USGS Hawaiian Volcano Observatory wrote about these earthquakes in an Information Statement back in April 2020:

Deep earthquakes of this type do not generally pose a hazard from ground-shaking. Most earthquakes in the sequence have been magnitude-2 or lower, and most have not been felt by residents.

Clustering of deep earthquakes in this region does not mean an eruption is imminent. HVO has recorded earthquakes in this area for many decades across several eruptive cycles at both Kīlauea and Mauna Loa volcanoes. No correlation between seismic activity in this zone and volcanic activity at the surface has been established, although this is an important topic for future research.

Past studies suggest these earthquakes, and associated episodes of rhythmic ground shaking known as tremor, are the result of stresses caused by transport of magma through the Earth’s mantle deep beneath the island, an area that may be the source region supplying magma to the active volcanoes.

The HVO monitoring network has recorded a high rate of seismicity in this region, typically between 20-40 earthquakes per day, since August 2019. A peak rate of more than 80 per day was recorded in February 2020. These rates are the highest ever measured for the area in the 60 years of instrumental observation. A sustained increase of this deep seismicity above long term background levels began as early as November 2015, although at rates lower than currently observed.

The strongest earthquake recorded in this sequence since August 2019 was a magnitude-3.5 event on January 6, 2020. The largest ever recorded by HVO in this deep region was a magnitude-4.7 earthquake in January 2006. Earthquakes in the magnitude 3-4 range can be felt widely by residents and are reported as weak to light shaking.