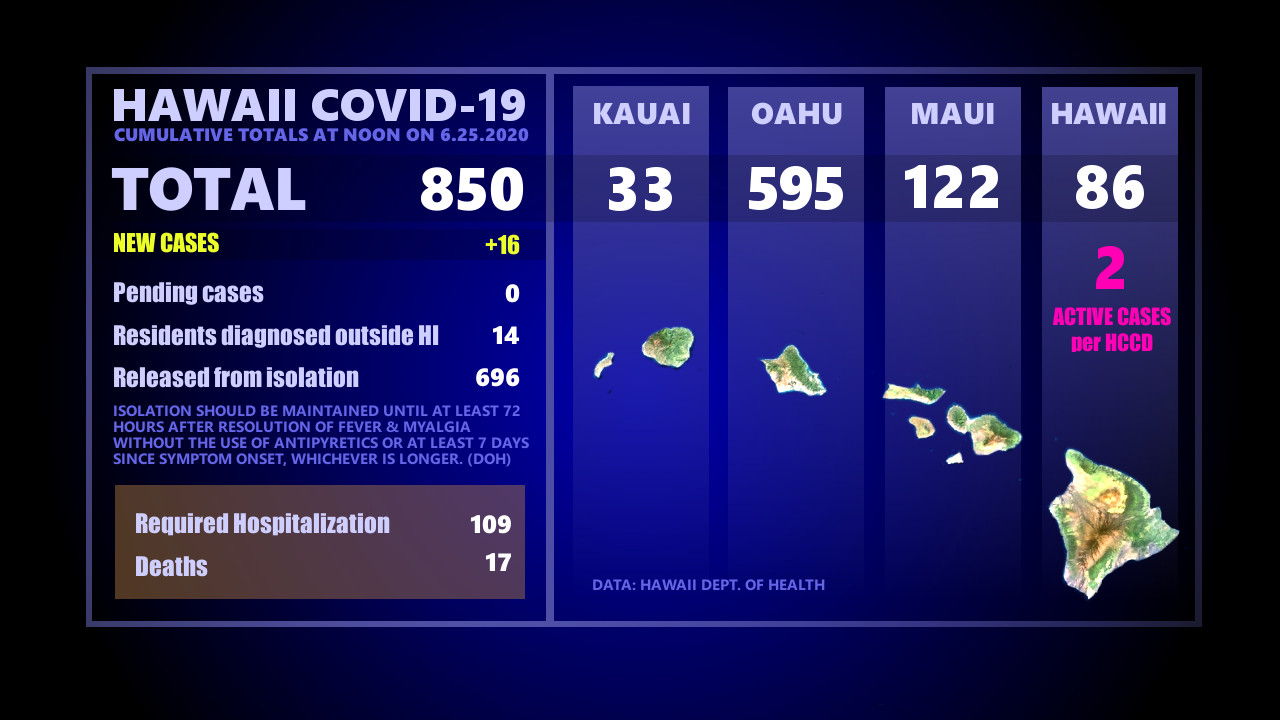 HAWAIʻI - There are only two (2) active cases of COVID-19 on Hawaiʻi island, state and county officials agree. 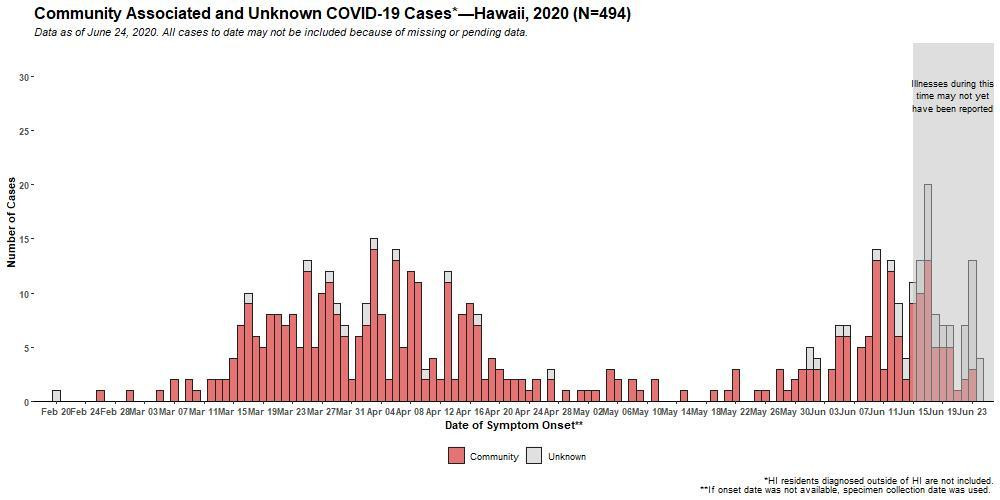 UPDATED – The Hawaiʻi Department of Health issued a news release adjusting the numbers that were reported at noon today. This story reflects the changes that were made.

(BIVN) – There were sixteen (16) newly reported cases of COVID-19 in the State of Hawaiʻi, health officials announced at noon on Thursday, bringing the cumulative total number of cases since the pandemic began to 850. (The State first reported 17 new cases but later issued a correction.)

The Hawaiʻi Department of Health said that as a result of updated testing information, one case was removed from the cumulative count.

“As the State and County of Hawaii move forward, it is so important to continue following the preventive policies to keep Hawaii safe,” said the Hawaiʻi County Civil Defense in a Thursday morning message. “To those traveling, know the importance of awareness and caution as you travel out of state.”

Today marks 13 weeks since the state’s mandatory 14-day self-quarantine started for all passengers arriving in Hawaii from out of state. Yesterday, 1,536 people arrived in Hawaii. During this same time last year approximately 35,000 passengers arrived in Hawaii daily, including residents and visitors. This table shows the number of people who arrived by air from out of state yesterday and does not include interisland travel. This data was collected from the Hawaii Department of Transportation’s (DOT) Mandatory Travel Declaration Form.

Senator Mazie K. Hirono (D-Hawaii) announced that the Hawaii Department of Health (HDOH) will receive more than $5.6 million from the Centers for Disease Control and Prevention through the Public Health Emergency Preparedness (PHEP) program. Funding under PHEP allows state health departments, along with local and territorial agencies, to strengthen their response to public health threats like infectious diseases, natural disasters, and biological, chemical, nuclear, and radiological events.

“Our nation is facing a public health crisis that is demonstrating just how important it is for state and local public health agencies to collaborate. This funding will help our state continue to respond to COVID-19, and strengthen systems to address future public health emergencies. I will fight for additional federal funding so that our communities have robust public health plans and the resources to implement them,” Senator Hirono said.

HDOH’s Office of Public Health Preparedness (OPHP) has used funding from the PHEP program to invest in public health surveillance and epidemiologic investigation, public health laboratory testing, community preparedness, emergency operations coordination, and information sharing. These investments allow the state to better respond to the current COVID-19 pandemic, and in recent years have been integral in protecting Hawaii residents during the Kilauea Volcano eruption in 2018 and in quickly ending a hepatitis A outbreak in 2016.

Senator Hirono has advocated for years to increase this program’s funding, including in a March letter she led with Senator Bob Menendez (D-N.J.) and other colleagues to the Senate Appropriations Committee.