WAIMEA, Hawaiʻi - Parker Ranch cancelled its annual 4th of July rodeo and instead donated three tons of beef to the Food Basket. 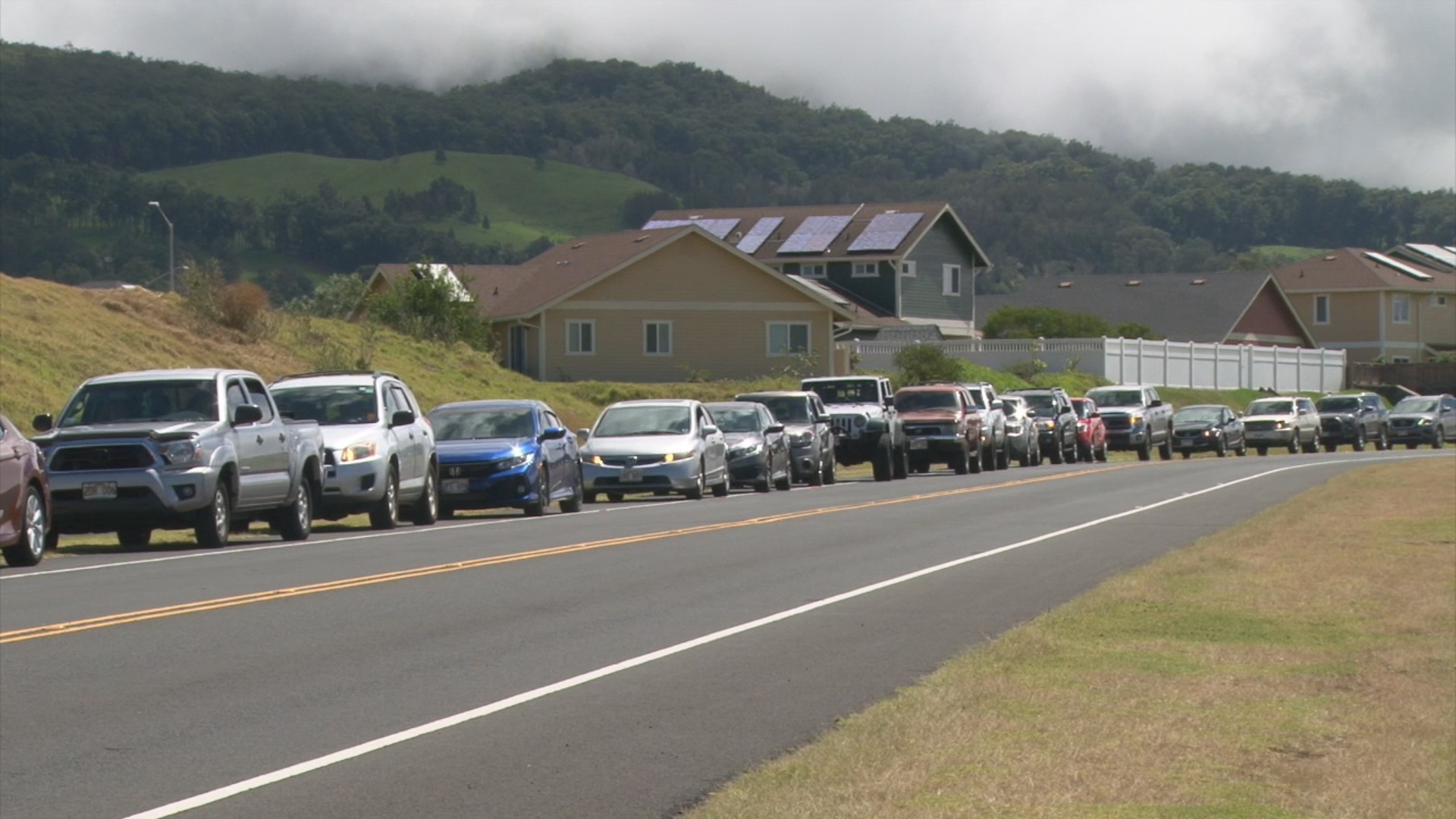 (BIVN) – The Food Basket, Hawaiʻi Island’s Food Bank, held its 42nd ʻOhana Drop in Waimea on Friday. It was a unique event thanks to a partnership with Parker Ranch, who provided 6,500 pounds of ground beef – over 3 tons – to families in need in the time of the COVID-19 pandemic.

“We had to unfortunately cancel our rodeo”, said Parker Ranch president and CEO Dutch Kuyper. “It’ll be the first rodeo, I think, in several decades that we’ve had to cancel.”

“We just decided it would be a great thing to help out the food basket and provide some beef to the community,” Kuyper said. 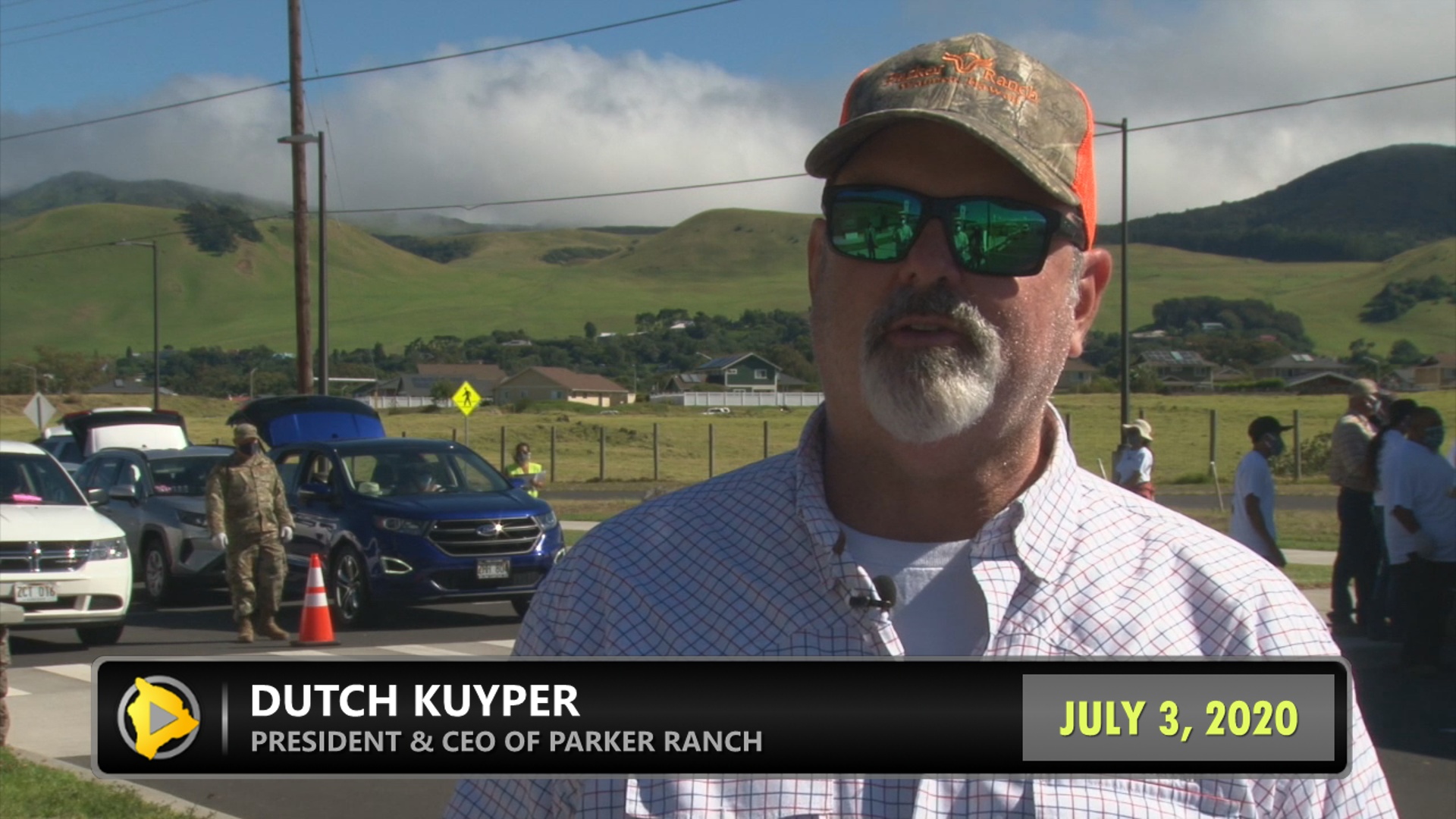 The Hawaiʻi National Guard, the Hawaiʻi County Police and the State Sheriffs provided some help, delivering the food to cars and directing traffic. Kokua Christian Ministries volunteers were also on-hand to distribute the barbecue bags, which included baked beans and chips.

“Every month since we started – we started in late March – we’ve seen a continual rise in need,” Albrecht said. “We have seen an astounding number of first-time food bank users. We’ve been tracking that with our registration process. At of our stops – in Waikoloa, the first time we’ve ever done one there – almost 95% percent were first-time users of a food bank. It’s sobering.”

“There’s so many people who’ve never ever dreamed that they’d lose their jobs, and then trying to navigate a system that you’ve never had to navigate before,” Albrecht said. “I know the high percentage of people that come to our drops, they really are in need. And we can particularly see from those first-time users, they’ve waited a long time in order to finally be humble enough, I guess, to come to a food drop. It’s hard, you know, it’s really hard.”

“There’s no judgment,” Albrecht continued. “Somebody needs food, they come and we don’t want anybody to hold back. We don’t want anybody saying ‘no, somebody needs it worse than I do.’ If you’re worried about feeding your kids or your kūpuna or anybody, if you’re skipping meals because you don’t have enough to eat, you don’t have enough food in your house, you need to come out.”

“The cost of food in normal, pre-COVID times is 81% higher than you would find on the mainland,” Albrecht said. “Right now it’s jumped, yet again. We’re seeing it. We’re purchasing all the food. There’s been a disruption in the supply chain from the mainland. The usual emergency food we get from the federal government is not arriving. So, again we are incredibly grateful to our donors who have given us enough money that we can actually purchase the food that you see being distributed today.”

Local farmers are also involved. Albrecht said they try to move the fresh produce around the island, in order to help small- and medium-farmers “who have lost their restaurant accounts, their resort accounts.”

“The really exciting news about that is that we don’t seem to have trouble getting enough food,” Albrecht said. “We have enough food on this island, actually, to feed ourselves.”

“It’s a realization that everybody is becoming aware of. If we support our local agriculture we will be able to feed ourselves,” she added. “And we don’t need to worry about the fact that 85% to 90% of our food is coming from off island. We could just keep all of our money here and invest in our local agriculture here.”