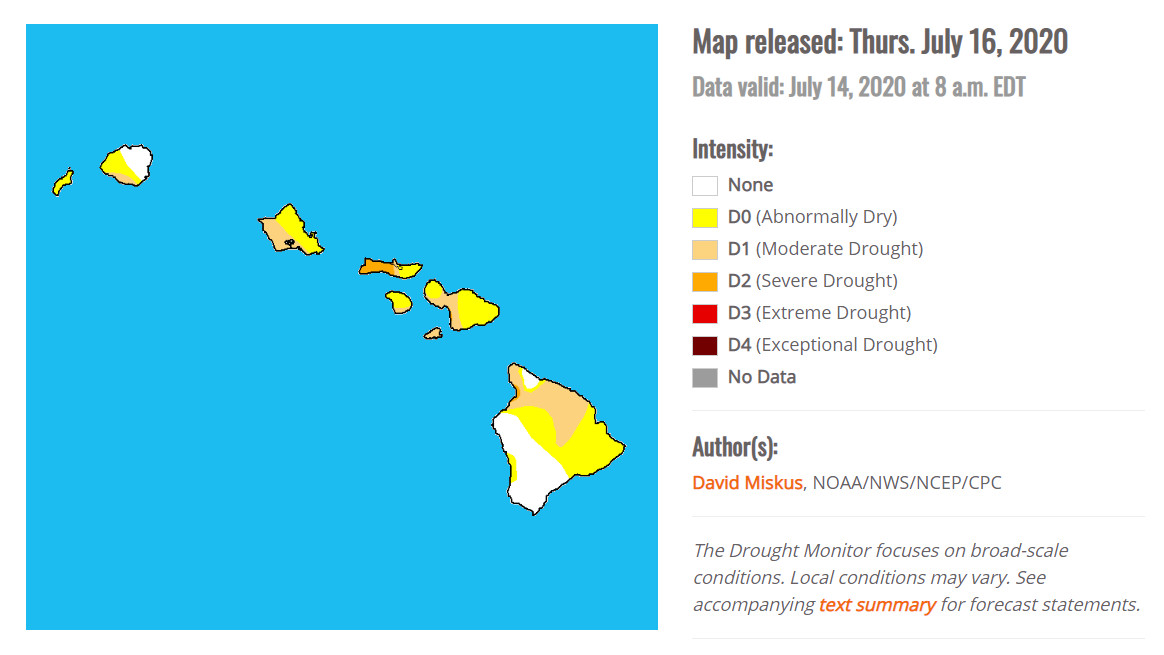 The above graphic was produced by David Miskus, NOAA/NWS/NCEP/CPC, and published by the U.S. Drought Montitor. The color blue behind the islands was added by BIVN.

HAWAIʻI ISLAND - There is also a large swath of the northern part of the Big Island under Moderate Drought conditions, maps show.

(BIVN) – A new map published by the U.S. Drought Monitor shows East Hawaiʻi continues to be Abnormally Dry, with some Moderate Drought in Hāmākua and parts of North and South Kohala. The map also shows a sliver of Extreme Drought in the area of Kawaihae.

According to the National Drought Summary published on July 14, 2020:

Windward areas received some rainfall while leeward sides saw little or no rainfall – as expected this time of year. On Kauai, subnormal rainfall totals and NDVI data supported the expansion of D1 along the lower southern slopes of the island. On Maui, the central valley remained quite dry, which was highlighted by a wild fire near Haliimaile southeast of Kahului that took a couple of days to contain. Rainfall and NDVI supported expanding the current leeward D1 to include the entire central valley. The rest of the state was unchanged.

The National Weather Service in Honolulu on July 9 prepared its Monthly Precipitation Summary for June 2020. For Hawaiʻi island, forecasters wrote:

Gages in the Hamakua, Hilo, and Puna areas of the Big Island had mostly near to below average monthly totals. Data from the Kona slopes indicated mostly near to above average monthly totals, with Honaunau and Kealakekua having their highest June totals since 1997. The Kau District had a wide range of conditions with some sites reporting above average totals and others at less than 50 percent of the June average. The USGS’ rain gage at Kawainui Stream had the highest monthly total of 10.79 inches (109 percent of average) and the highest daily total of 2.45 inches on June 10.

Big Island rainfall totals for 2020 through the end of June remained near to above average at most of the gages. The USGS’ Saddle Road Quarry gage had the highest year-to-date total of 105.62 inches (152 percent of average).