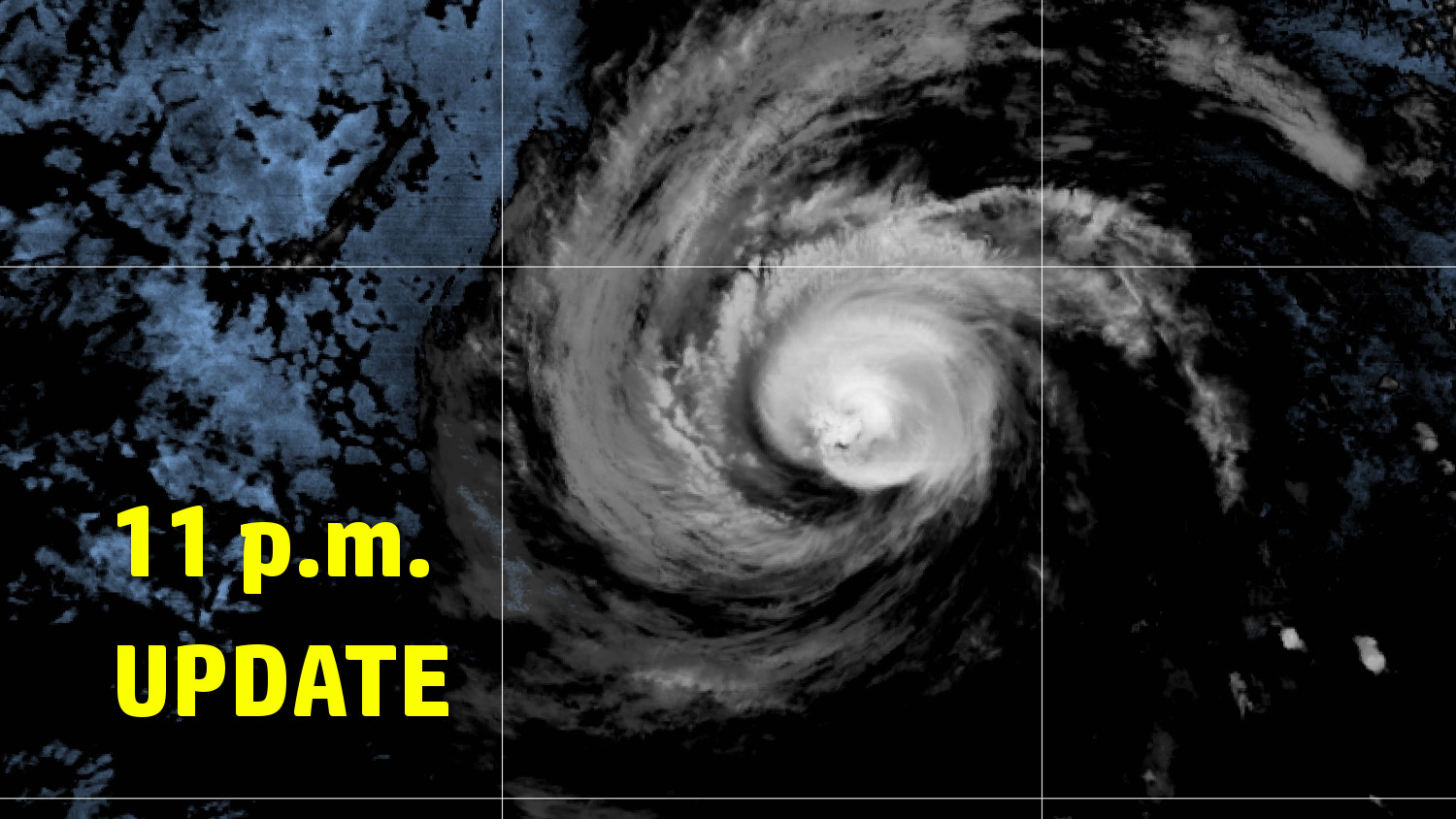 HAWAIʻI ISLAND - Based on the latest intensity and track forecast, Tropical Storm Warnings have been issued for Hawaiʻi County, forecasters say. 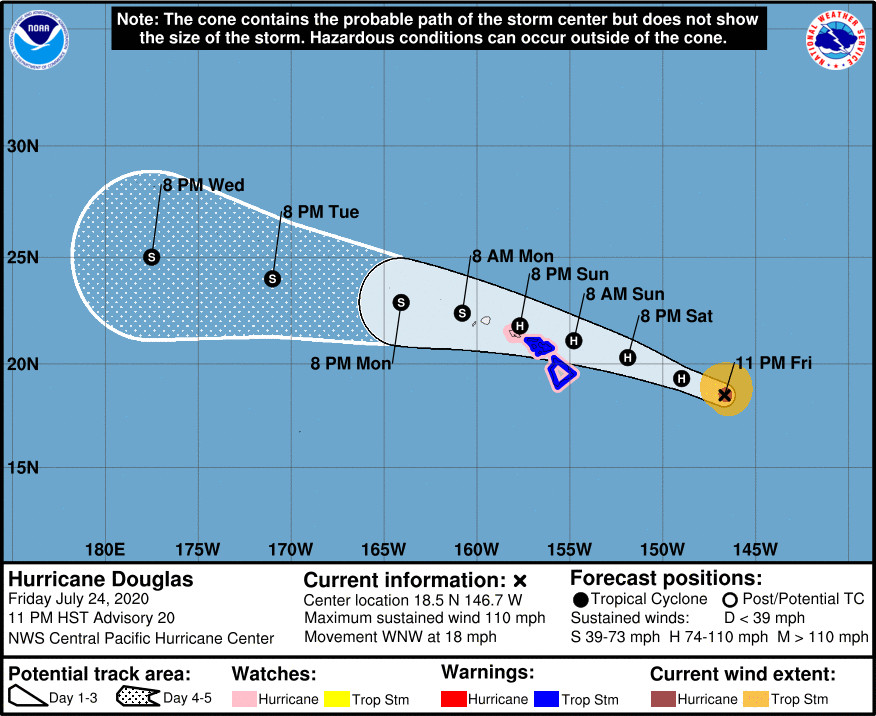 (BIVN) – As Hurricane Douglas continues its approach towards the Hawaiian islands, a Tropical Storm Warning has been issued for Hawaiʻi County and Maui County. The Hurricane Watch issued for both counties earlier in the day on Friday remains in place.

A Tropical Storm Warning means that tropical storm conditions are expected somewhere within the warning area within 36 hours.

Douglas has weakened slightly since the last update. Maximum sustained winds are now near 110 mph with higher gusts, making Douglas a category 2 hurricane on the Saffir-Simpson Hurricane Wind Scale. Gradual weakening is expected to continue through the weekend. However, Douglas is still forecast to be close to hurricane strength when it nears the islands, forecasters say.

Hawaiian Airlines says it is “canceling all Neighbor Island flights on Sunday, in addition to select flights tomorrow evening between Honolulu and Maui and the Island of Hawaii, due to adverse weather expected from Hurricane Douglas.”

The Hawaiʻi Department of Land and Natural Resources says all East Hawaiʻi State Parks, from MacKenzie State Park in lower Puna to Kalōpā State Park in Hāmākua, will be closed starting on Saturday, July 25, until an all clear has been given and storm damage assessments have been conducted. West Hawaiʻi parks remain open, but they are subject to immediate closure depending upon the path of the storm.

Heavy rainfall associated with Douglas is also expected to affect the state. Although total rain accumulations of 5 to 10 inches will be possible on the smaller islands, the Big Island can expect to see 3 to 6 inches of rainfall, with locally higher amounts, the forecasters say.

Large swells generated by Douglas are expected to affect the Hawaiian Islands this weekend. A High Surf Warning will be in effect on Saturday morning. Dangerously large breaking waves of 15 to 25 feet could impact east facing shores of Hawaiʻi island.

“Due to potential hazards and emergency vehicle operations, travel in coastal areas and ocean recreation should be avoided,” the National Weather Service wrote.

Douglas remains a powerful hurricane this evening as confirmed by the U.S. Air Force 53rd Weather Reconnaissance Squadron. The Hurricane Hunters found maximum flight level winds of 108 knots (97 knots with appropriate wind reduction factor to the surface from the 700 mb flight level) and SFMR winds of 93 knots. Based on these data and recent trends showing a degraded satellite presentation, the initial intensity for this advisory will be lowered to 95 knots. Douglas continues to move rapidly to the west-northwest, with an initial motion set at 295/16 knots.

Despite relatively low vertical wind shear values forecast to affect the tropical cyclone during the next day or so, SSTs will remain below 26C. As a result, the official intensity forecast calls for slow but steady weakening during the next couple days as Douglas nears Hawaii, with the cyclone expected to be a minimal category 1 hurricane or strong tropical storm approaching the eastern end of the state late Saturday night or Sunday. Continued weakening is then forecast as Douglas tracks westward over or near the other main Hawaiian islands and west of the state early next week. The official intensity forecast has changed very little from the previous advisory, and generally follows a blend of the corrected consensus and statistical model guidance.

Douglas is forecast to move rapidly off to the west-northwest during the next couple days toward a weakness in the sub-tropical ridge north of the Hawaiian islands. The subtropical ridge is forecast to strengthen north of the state over the weekend, and this should steer the tropical cyclone westward over or very near the Hawaiian Islands late Saturday night through Sunday night, before exiting to the west of the state early next week. The official track forecast is virtually identical to the previous advisory, and continues to hug the southern end of the guidance envelope. This track is roughly in between the corrected consensus guidance HCCA and the ECMWF and GFS ensemble mean tracks.

1. Douglas continues to approach the main Hawaiian Islands, potentially passing dangerously close to, or over, the islands Saturday night through Sunday night. The close passage of Douglas brings a triple threat of hazards, including but not limited to damaging winds, flooding rainfall, and dangerously high surf, especially along east facing shores.