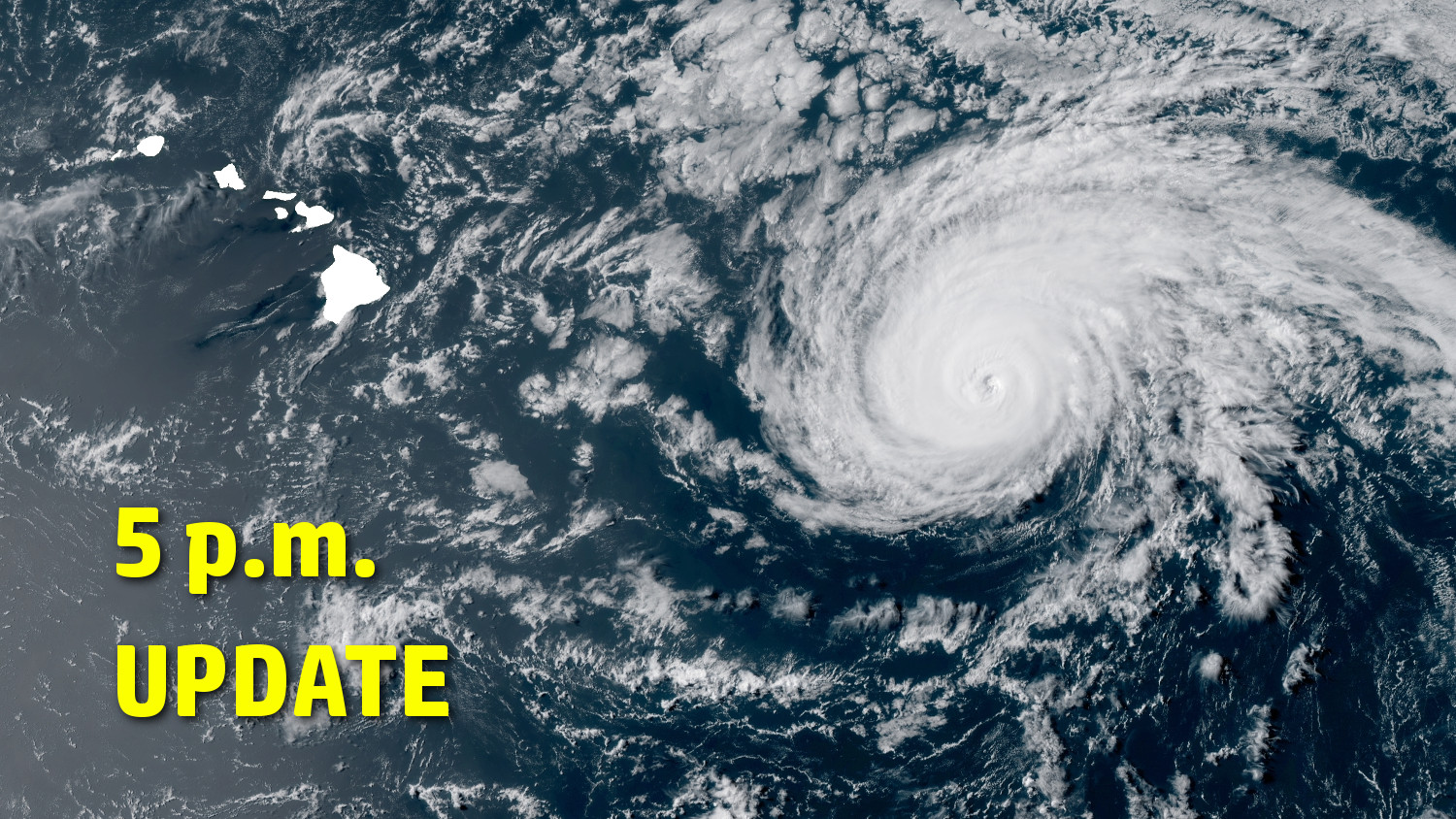 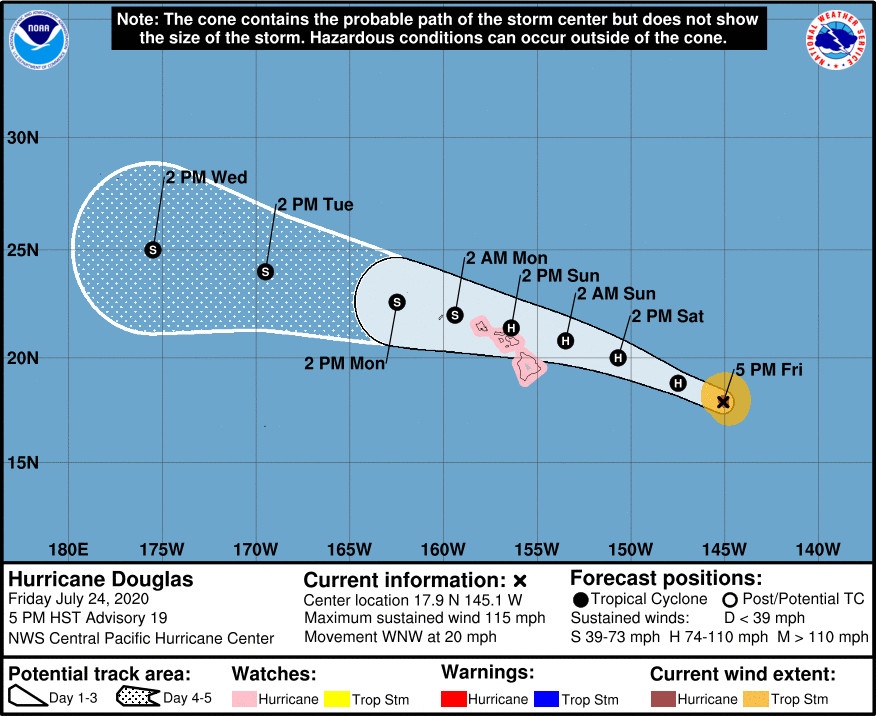 (BIVN) – As of 5 p.m., Hurricane Douglas was 665 miles east of Hilo, moving west northwest at 20 mph. Douglas remains a category 3 hurricane, with maximum sustained winds at 115 mph with higher gusts.

The National Weather Service this afternoon started to get into the details concerning the specific hazards that Douglas may bring to Hawaiʻi:

Prepare for dangerous wind having possible significant impacts across Maui County and the Big Island. Potential impacts in this area include:

Also, prepare for hazardous wind having possible limited impacts across the rest of the State of Hawaii.

Prepare for locally hazardous surge having possible limited impacts across Maui County and the Big Island. Potential impacts in this area include:

Elsewhere across the Hawaiian islands, little to no impact is anticipated.

Prepare for life-threatening flooding having possible extensive impacts across Maui County and the Big Island. Potential impacts include:

Prepare for dangerous flooding having possible limited to significant impacts across the rest of the State of Hawaii.

Little to no impacts are anticipated at this time across the Hawaiian islands. 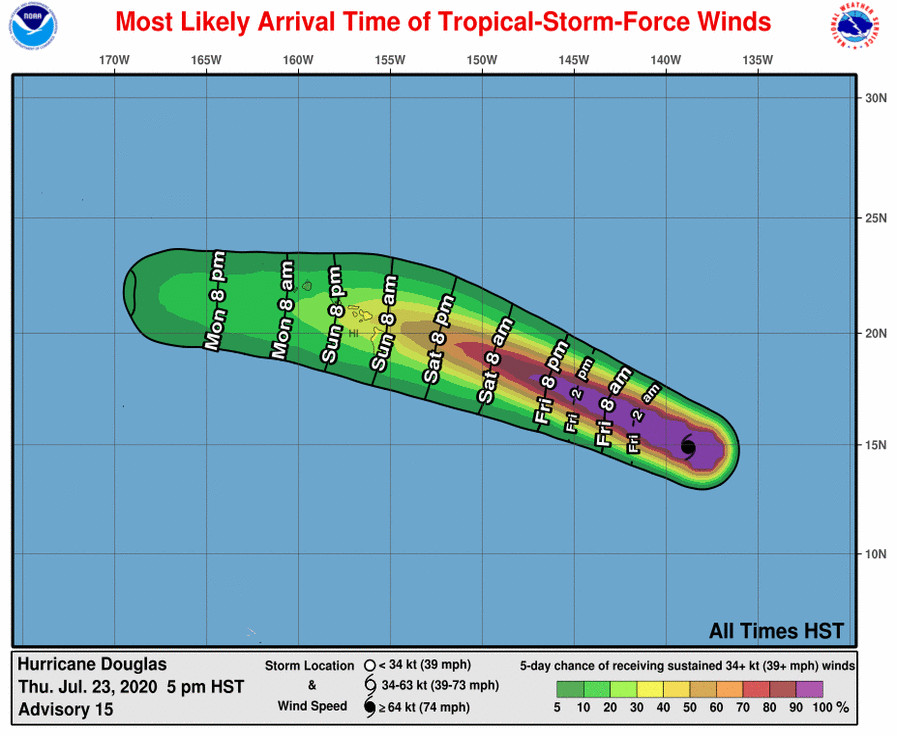 The eye of Douglas has remained visible in conventional satellite imagery through the day today, and even cleared out for a little while this afternoon, indicating that Douglas remains a powerful hurricane. Subjective satellite current intensity estimates ranged from 4.5/90 kt to 5.5/105 kt, while ADT was near 5.5. Although the eye is clouding up again this afternoon, and surrounding convection is cooling, the initial intensity has been held at 100 kt for this advisory.

The forward motion vector has changed little over the past 24 hours, and is measured to be 295/17kt, as Douglas continues to be steered by a mid-level ridge centered to the distant northeast. As Douglas draws closer to the main Hawaiian Islands the next 2 days, it will round the western periphery of the ridge, allowing the cyclone to gain some latitude, with some reduction in forward speed. Thereafter, a mid-level ridge is forecast to build to the north of Douglas, potentially inducing a turn toward the west, with some increase in forward speed. The updated track forecast is nearly identical to the previous, lies along the southern side of a fairly tightly-clustered guidance envelope, and is very close to ECMWF ensemble guidance. On the forecast track, Douglas will move dangerously close to the Hawaiian Islands, and a Hurricane Watch is posted for all islands except Kauai County, which may need to be added on Saturday.

Douglas will be traversing an area of sub-26C SST for the next 36 hours or so, which is expected to lead a gradual weakening trend, despite vertical wind shear on the lighter side, especially by central Pacific standards. SSTs along the forecast track increase from 48 hours onward, at the same time that Douglas is expected to move into an area of increased vertical wind shear as it rounds the southwestern periphery of an upper-level ridge. This is expected to lead to a continued weakening trend, although at a fairly slow rate. The intensity forecast is very close to the SHIPS guidance, and close to the IVCN intensity consensus.

A Hurricane Hunter aircraft is en route to fly an initial mission into Douglas, and this valuable data is expected to be available for the next forecast update. Additional flights into Douglas are scheduled for tomorrow. In the meantime, a morning ASCAT pass was used to fine tune the wind radii analysis.

1. Douglas continues to approach the main Hawaiian Islands, potentially passing dangerously close to, or over, the islands Saturday night through Sunday night. The close passage of Douglas brings a triple threat of hazards, including but not limited to damaging winds, flooding rainfall, and dangerously high surf, especially along east facing shores.