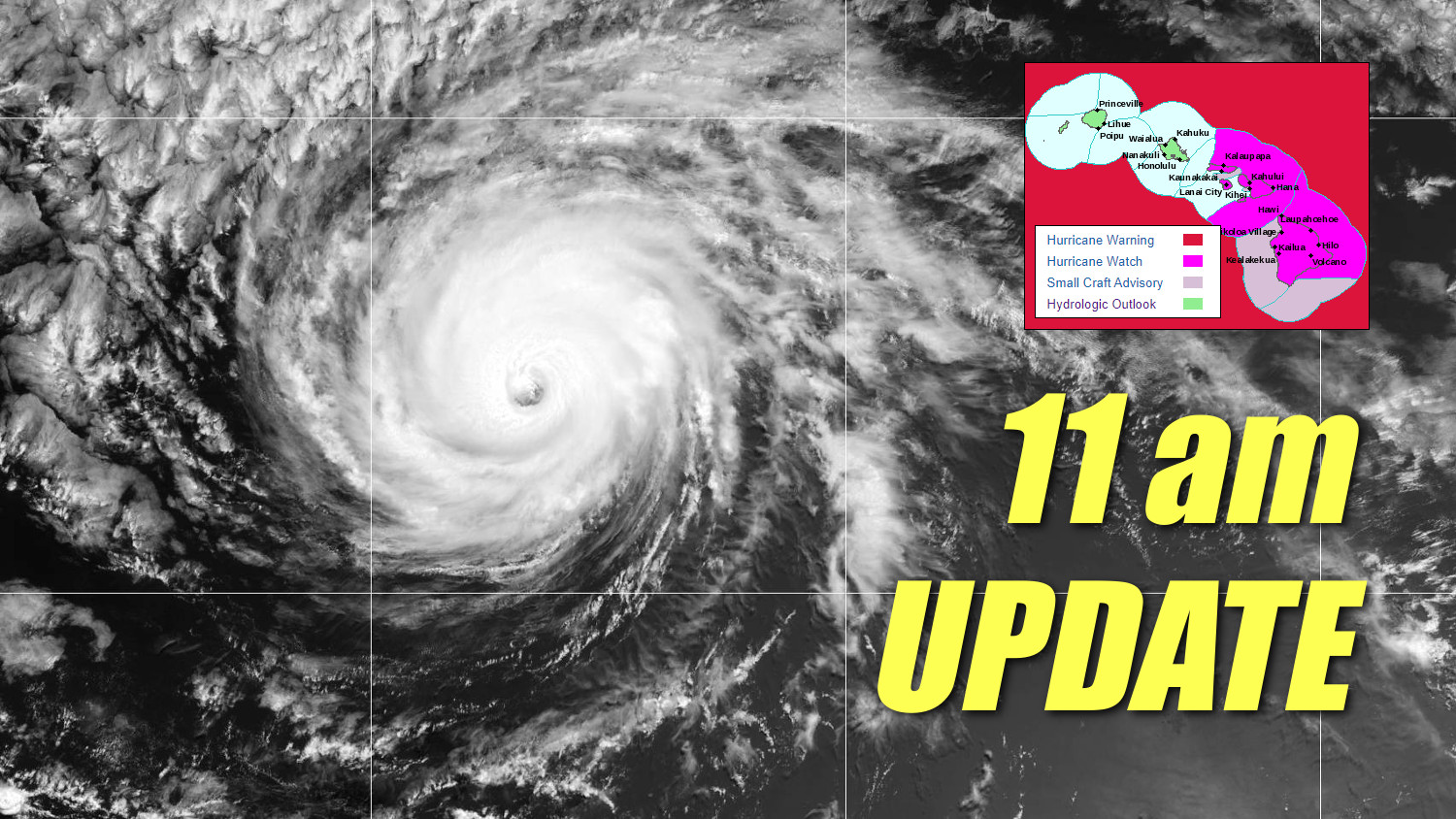 HAWAIʻI - A Hurricane Watch has been issued for the Big Island, as hurricane-force winds are possible somewhere on the island within the next 48 hours. 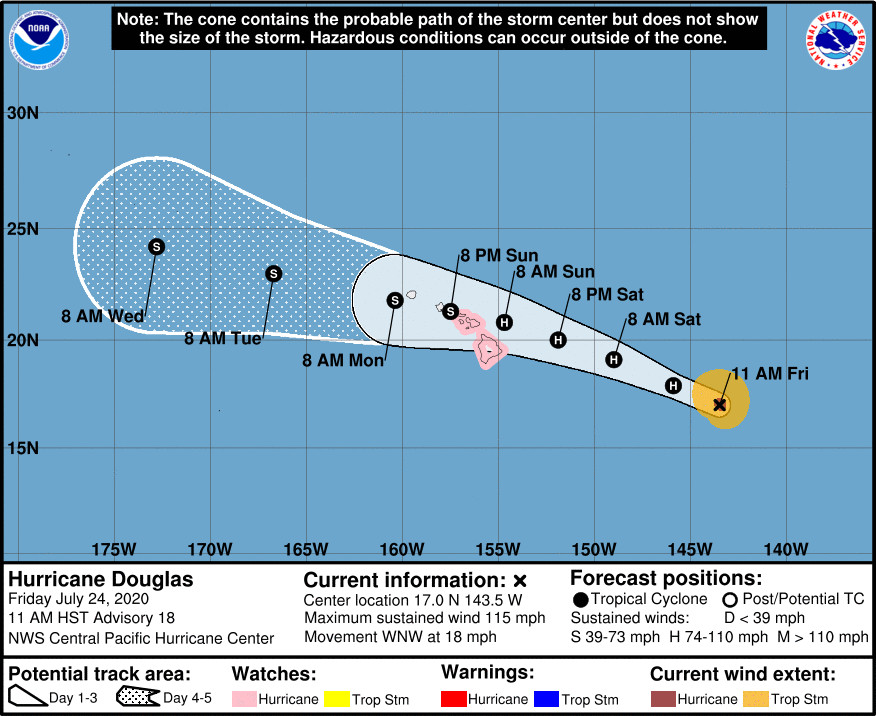 (BIVN) – A Hurricane Watch has been issued for the Big Island of Hawaiʻi and for Maui County – including Maui, Lanai, Molokai and Kahoolawe – as Major Hurricane Douglas continues its track towards the islands.

A Hurricane Watch means that hurricane conditions are possible within the watch area, in this case within 36 to 48 hours.

Hurricane Douglas is presently 785 miles east southeast of Hilo, heading west northwest at 18 mph. The Central Pacific Hurricane Center says this motion is expected to continue for the next two days, followed by a slight decrease in forward speed and a turn toward the west.

On the forecast track, Douglas will be near the main Hawaiian Islands on Sunday and Monday.

Douglas is still a category 3 major hurricane on the Saffir-Simpson Hurricane Wind Scale. Gradual and steady weakening is expected to continue through the weekend, the Central Pacific Hurricane Center says. However, Douglas is still forecast to be near hurricane strength when it nears the islands.

Hurricane Douglas could bring the following hazards to the islands:

SURF: Large swells generated by Douglas are expected to begin affecting portions of the Hawaiian Islands on Saturday. These swells are likely to cause life-threatening surf and rip current conditions for a couple of days.

RAINFALL: Heavy rainfall associated with Douglas is expected to affect portions of the Hawaiian Islands from late Saturday night through Monday. Total rain accumulations of 6 to 10 inches with isolated maximum totals of 15 inches are possible, especially in higher terrain. This rain may result in life-threatening flash flooding and land slides. 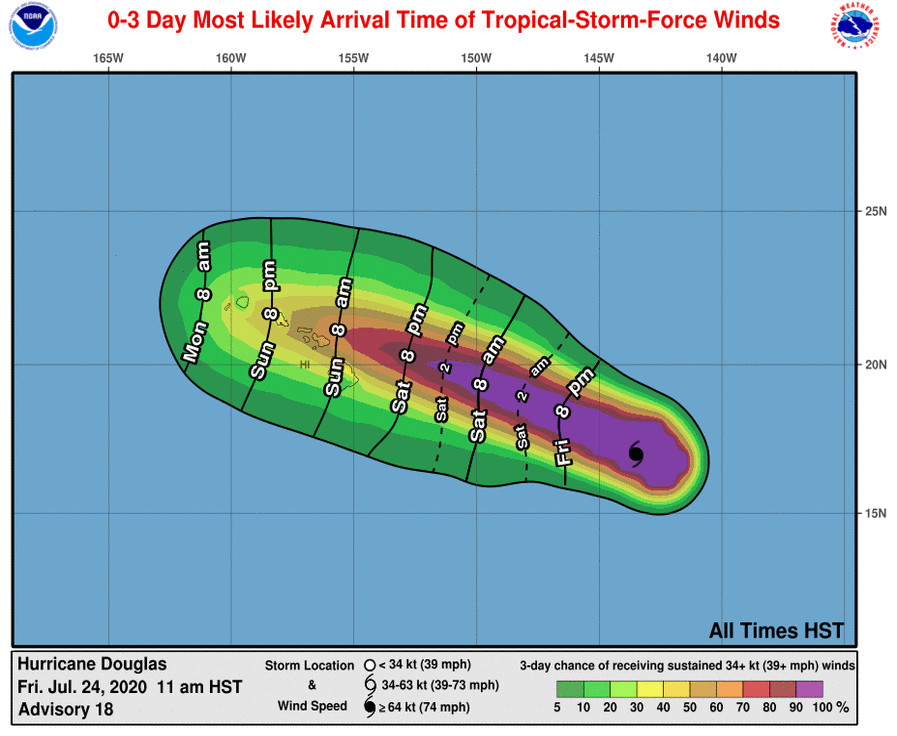 After a period of rapid intensification yesterday, Douglas’ satellite appearance has degraded somewhat over the past 12 hours or so. However, a fairly large but ragged and cloud-filled eye is still noted in conventional satellite images. Subjective Dvorak current intensity estimates were 5.5/105 kt from SAB and HFO, 5.1/93 kt from ADT, while SATCON estimated was near 100 kt. A blend of these led to an initial intensity estimate of 100 kt for this advisory.

The initial motion for this advisory is a steady 295/16 kt, as Douglas continues to be steered by a robust mid-level ridge centered to the northeast. As Douglas draws closer to the main Hawaiian Islands, it will be reaching the western periphery of the ridge, and model guidance indicates that this will allow the cyclone to gain some latitude over the next 2 days, with some reduction in forward speed. Thereafter, the mid-level ridge is forecast to subtly build to the north of Douglas, potentially inducing a turn toward the west, with some increase in forward speed. The updated track forecast is nearly identical to the previous, lies along the southern side of the guidance, and is very close to ECMWF guidance that has been performing well thus far with Douglas. On the forecast track, Douglas will move dangerously close to the Hawaiian Islands. A Hurricane Watch has been issued for Maui County and the Big Island, and may need to be expanded to additional areas later today or tonight.

The intensity forecast continues to anticipate a slow but steady weakening of the cyclone as it traverses cooler waters, and later encounters increased vertical wind shear as waters warm somewhat near the Hawaiian Islands. Little overall change to the ongoing forecast was made, and the updated forecast closely follows the GFS- and ECMWF-based SHIPS guidance, and is close to the intensity consensus IVCN.

1. Douglas will continue to quickly approach the main Hawaiian Islands, passing dangerously close to, or over, the islands on Sunday. Dangerous, life-threatening surf will arrive ahead of the hurricane on Saturday. Heavy rain and increasing winds are possible on the Big Island starting Saturday night, and could quickly spread up the chain Sunday.

2. It is important not to focus on the exact forecast track. Due to Douglas’ angle of approach to Hawaii, any small changes in the track could lead to significant differences in where the worst weather will occur.

3. Wind gusts near mountains and higher terrain can be significantly enhanced as they blow downslope.

This story will be updated shortly.