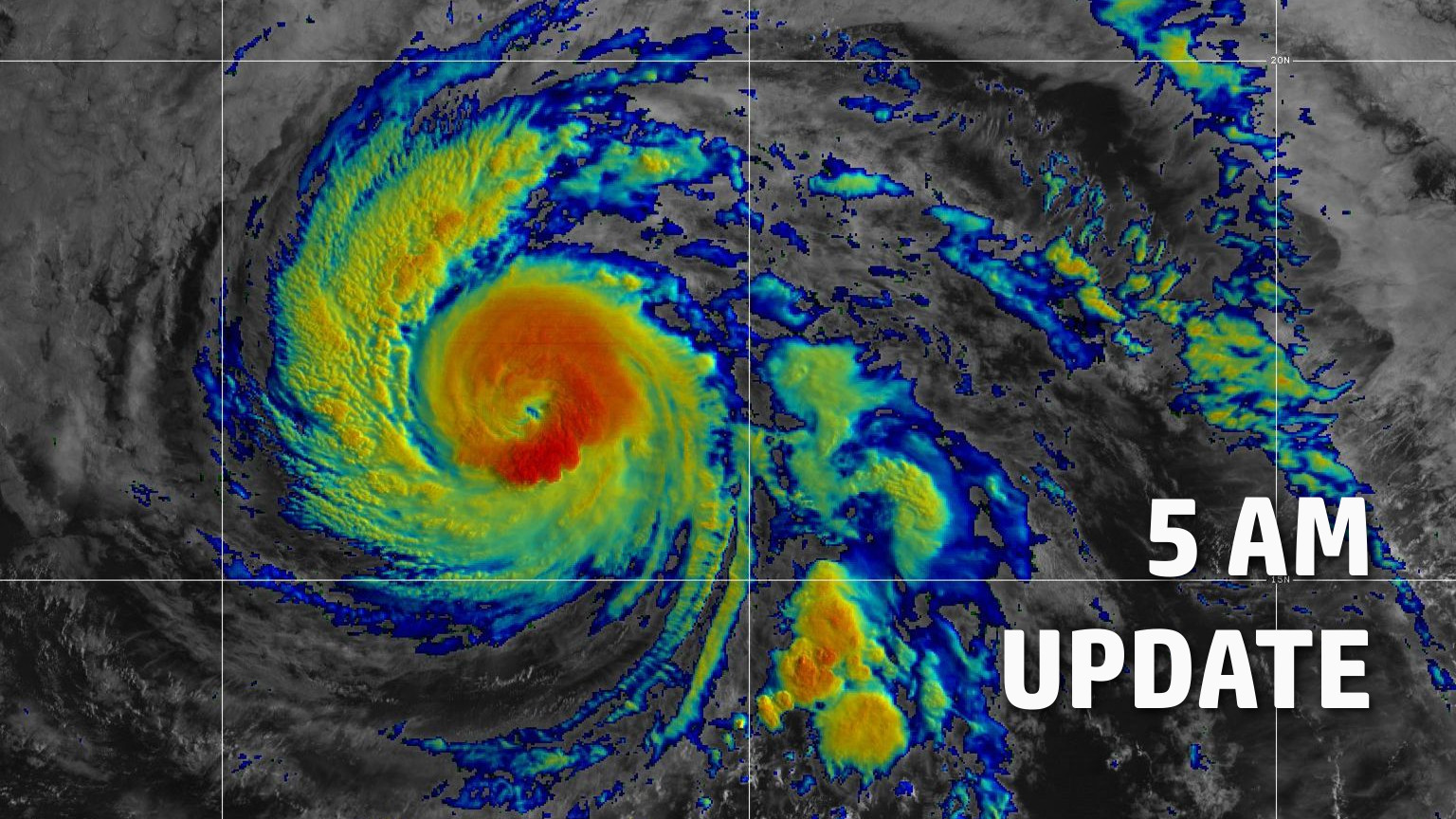 HAWAIʻI - Douglas is now a category 3 hurricane, and is still forecast to be near hurricane strength as it approaches the eastern end of the Hawaiian Island chain late Saturday night or Sunday. 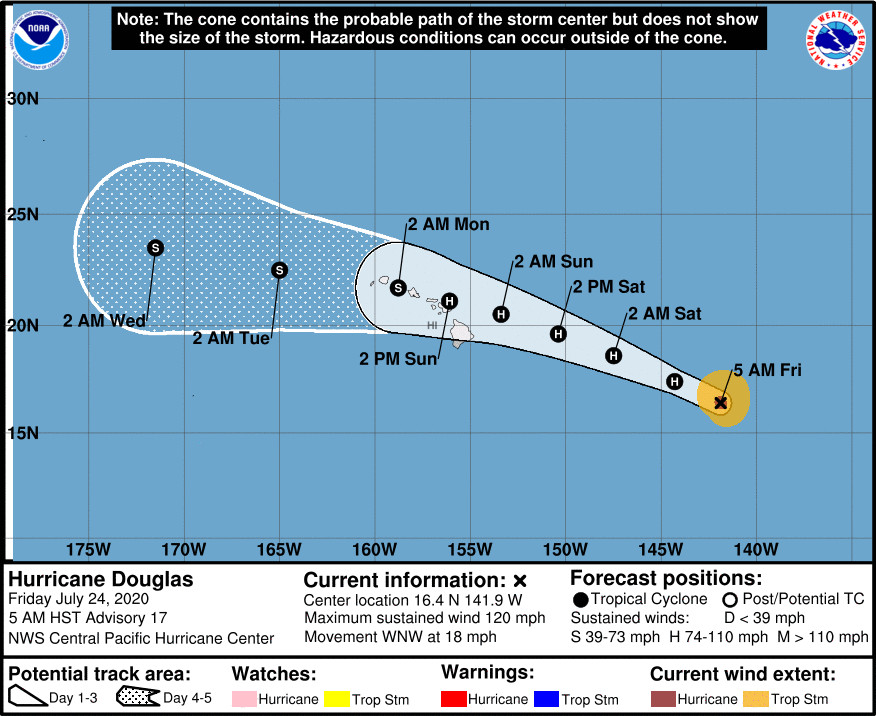 Douglas has started to slowly weaken. The storm is now a category 3 hurricane on the Saffir-Simpson Hurricane Wind Scale, with maximum sustained winds are near 120 mph with higher gusts. The Central Pacific Hurricane Center says gradual weakening is expected to continue today through the weekend. “However, Douglas is still forecast to be  near hurricane strength as it approaches the eastern end of the Hawaiian Island chain late Saturday night or Sunday,” forecasters wrote. 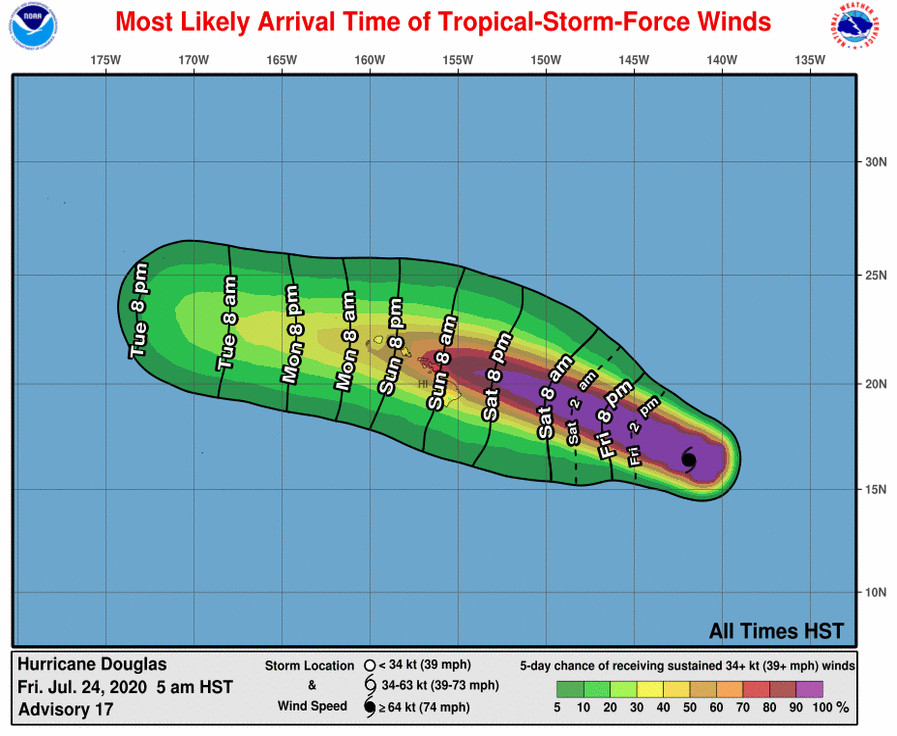 WIND: Strong winds associated with Douglas are expected to affect portions of the Hawaiian Islands as early as late Saturday night or Sunday, through the day Monday. Tropical Storm or Hurricane Watches will likely be required for portions of the state later today.

SURF: Large swells generated by Douglas are expected to begin affecting portions of the Hawaiian Islands on Saturday. These swells are likely to cause life-threatening surf and rip current conditions. Please consult products from your local weather office.

RAINFALL: Heavy rainfall associated with Douglas is expected to affect portions of the Hawaiian Islands from late Saturday night through Monday. Total rain accumulations of 6 to 10 inches with isolated maximum totals of 15 inches will be possible, especially across elevated terrain. This rain may result in life-threatening flash flooding and land slides, as well as rapid water level rises on small streams.

Hurricane Watches for the Big Island and Maui County will be possible later today, forecasters say.

Douglas remains a powerful hurricane early this morning, although the satellite presentation has degraded quite a bit since last evening, with eye of the tropical cyclone now nearly completely cloud filled. The latest current intensity estimates from the satellite agencies came in with 5.5 (102 knots) from PHFO and SAB, 5.0 (90 knots) from JTWC, while ADT came in at 5.9 (112 knots). Taking a blend of the estimates above and accounting for recent satellite trends, the intensity with this advisory will be lowered to 105 knots. Douglas continues to move rapidly to the west-northwest, with an initial motion set at 295/16 knots.

Hurricane Douglas recently moved over slightly cooler sea surface temperatures (SSTs) of around 78F, and this seems to have been enough to lead to the weakening seen in satellite imagery. Despite relatively low vertical wind shear values forecast to affect the tropical cyclone during the next couple days, SSTs will remain unfavorable for intensification. The official intensity forecast calls for steady weakening during the next couple days as Douglas nears Hawaii, with the cyclone expected to be a category 1 hurricane or strong tropical storm approaching the eastern end of the state late Saturday night or Sunday. Continued weakening is then forecast as Douglas tracks westward over or near the other main Hawaiian islands and west of the state early next week. Depending on the amount of interaction with the high terrain of the Big Island and Maui, the tropical cyclone could weaken faster than indicated in the official forecast, which follows a blend of the corrected consensus and statistical model guidance.

Douglas is forecast to move rapidly off to the west-northwest during the next couple days toward a weakness in the sub-tropical ridge north of the Hawaiian islands. The subtropical ridge is forecast to strengthen north of the state over the weekend, and this should steer the tropical cyclone westward over or very near the Hawaiian Islands Sunday through Monday, before exiting to the west of the state. The official forecast continues to hug the southern end of the guidance envelope out of respect for the ECMWF, but if model trends continue, this track may need to be adjusted further northward in future advisory packages.

Based on the latest intensity and track forecasts, Hurricane or Tropical Storm watches will likely be required for portions of the eastern end of the state (Big Island and the Maui County Islands) later today.

Douglas is expected to move near or over portions of the main Hawaiian Islands Sunday through Monday, and there is an increasing chance that strong winds, dangerous surf, and heavy rainfall could affect portions of the state beginning late Saturday night or Sunday. Interests on the Hawaiian Islands should continue to monitor the progress of Douglas and the official forecasts as they evolve during the next few days.