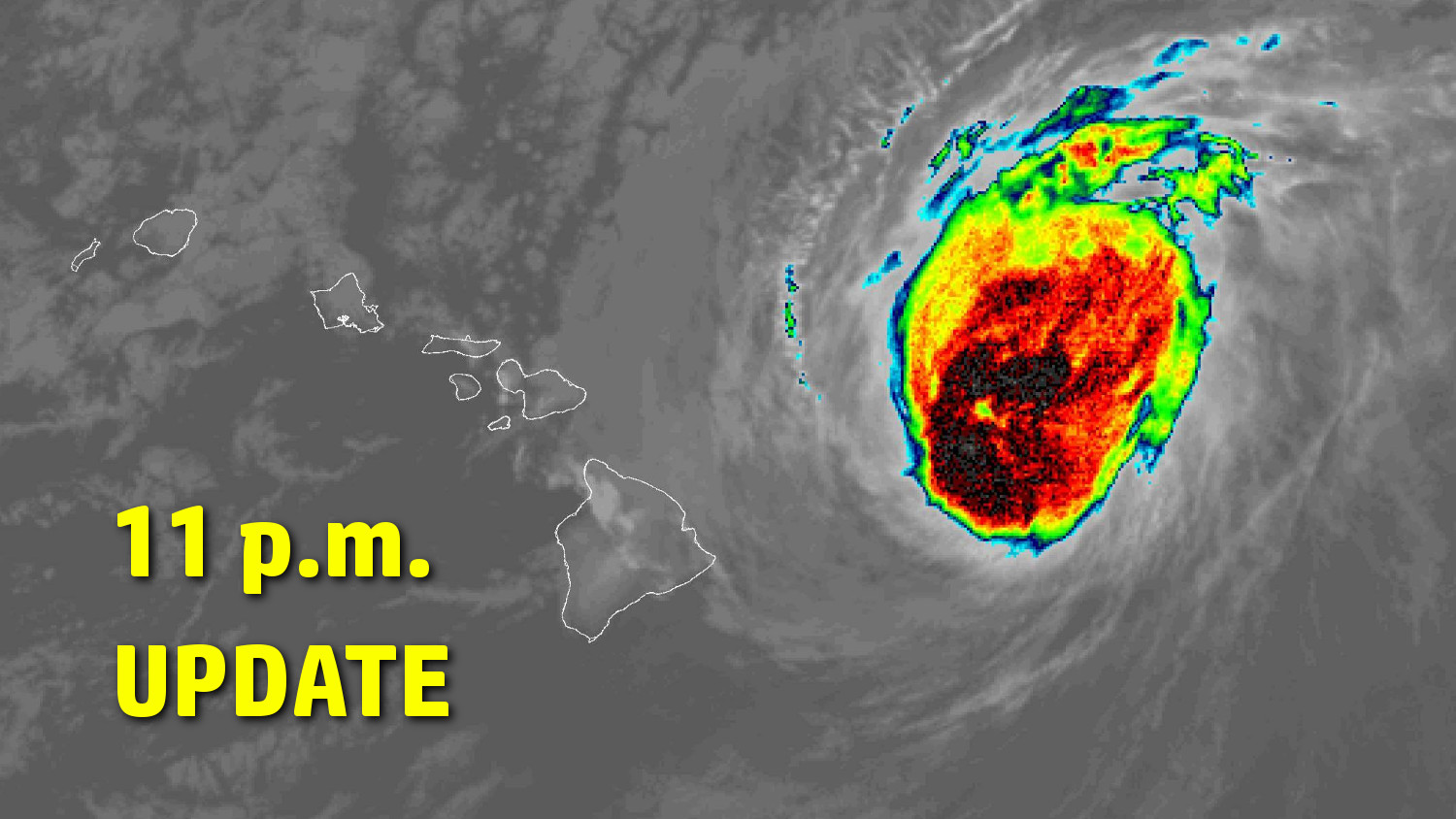 graphic by BIVN, image of Hurricane Douglas via NOAA NWS

HAWAIʻI - Forecasters say "dangerous" Hurricane Douglas is drawing closer to Hawaiʻi, and a Hurricane Warning has been issued for Kauai County. 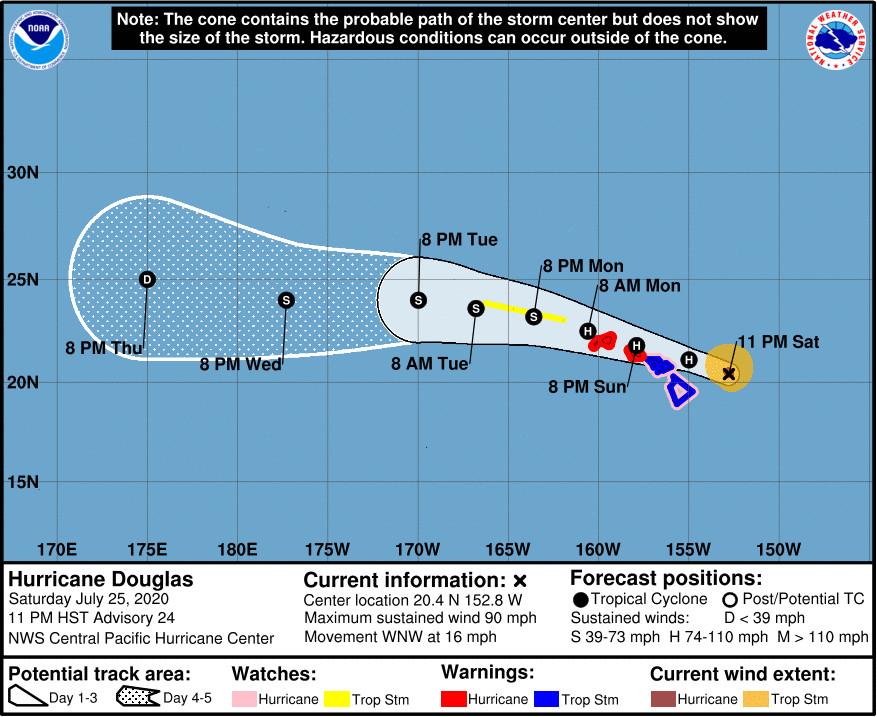 (BIVN) – In an 11 p.m. update, the Central Pacific Hurricane Center reported Hurricane Douglas – now 155 miles east northeast of Hilo – continues to exhibit maximum sustained winds of 90 mph with higher gusts. Douglas has maintained that same strength for the past 12 hours. Douglas is still expected to undergo some slow weakening during the next 48 hours, but the storm is forecast to remain near hurricane intensity as it passes the islands. The persistent strength of the storm is necessitating a Hurricane Warning for Kauai County.

A Tropical Storm Warning and a Hurricane Watch remain in place for Hawaiʻi island. A Flash Flood Watch and a High Surf Warning are also in effect.

Tropical Storm conditions are expected across the Big Island, and Maui County, beginning early Sunday. Douglas could also produce 2 to 5 inches of rainfall over the northern half of the Big Island.

“The present location, strength and track direction are favorable for Hawaii Island and if the present forecast continue Hawaii Island should avoid any direct impact from Hurricane Douglas,” stated the Hawaiʻi County Civil Defense in an early evening message. “Be aware that hurricanes are erratic and speed, direction, and intensity can change quickly so do keep yourself updated,” the message stated.

The Districts of Hamakua and Kohala can expect higher than normal winds to occur later tonight through tomorrow morning, civil defense said.

From the Central Pacific Hurricane Center discussion at 11 p.m. HST:

Hurricane Hunters from the Air Force 53rd Weather Reconnaissance Squadron have been flying through and around the center of Douglas through the evening, providing valuable ground truth. Latest data support maintaining Douglas’ initial intensity at 80 kt, with maximum flight-level winds near 90 kt, SFMR winds as high as 78 kt, and a central pressure near 983 mb. Worth noting that the data also indicate that the low-level center is south of the center that is seen in conventional satellite imagery. Recent microwave images confirm that the cyclone is tilted to the north with height, due to southerly vertical wind shear.

Despite the vertical wind shear, Douglas is expected to only slowly weaken as it comes dangerously close to the Hawaiian Islands. This is primarily due to steadily increasing SSTs along the forecast track, and also likely due to the fact that most of the shear is in the upper levels. While Douglas has rounded the southwestern edge of a ridge aloft, leading to high-level southerly shear, a mid-level ridge is expected to build westward to the north of Douglas, likely allowing the low- to mid-level core of the cyclone to remain intact. The updated intensity forecast closely follows the consensus IVCN, and maintains Douglas as a hurricane as it passes near Oahu and Kauai County.

The mid-level ridge will continue to drive Douglas toward the west-northwest, with the current motion vector estimated to be 290/14 kt. The forecast track takes the center of Douglas dangerously close to Oahu and Kauai on Sunday, with some of the guidance indicating a slight jog toward the west Sunday evening near Oahu, necessitating a Hurricane Warning for Kauai County. Douglas will potentially impact parts of the Papahanaumokuakea Marine National Monument on Monday and Tuesday. The updated forecast track is very close to the previous forecast, the track consensus TVCN, and is on the southern side of most of the guidance. However the GFS and ECMWF ensemble means are just left of the official forecast, suggesting a potentially more impactful scenario for Kauai County and Oahu.

1. Douglas continues to approach the main Hawaiian Islands, and will pass dangerously close to, or over, the islands Sunday. The close passage of Douglas brings a triple threat of hazards, including but not limited to damaging winds, flooding rainfall, and dangerously high surf, especially along east facing shores.