HAWAIʻI - The Hurricane Watch for the Big Island has been cancelled, and a Hurricane Warning has been issued for Maui. 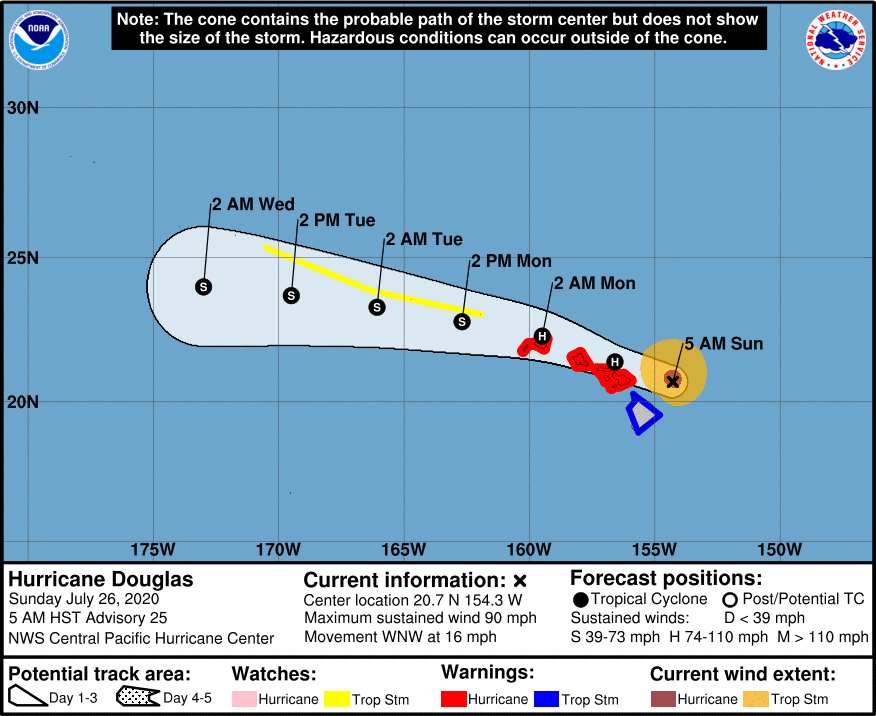 (BIVN) – As of 5 a.m. this morning, Hurricane Douglas remains a dangerous hurricane, 85 miles northeast of Hilo and moving west-northwest near 16 mph . The storm continues to generate sustained winds near 90 mph with higher gusts. Gradual weakening is still forecast during the next 48 hours, but Douglas is expected to remain a hurricane as it moves through the islands, forecasters say.

A Hurricane Warning has been issued for Maui County, and the Hurricane Watch for Hawaiʻi island has been cancelled.

A Tropical storm Warning remains in effect for Hawaiʻi island. A Flash Flood Watch and a High Surf Warning are also in effect.

The Central Pacific Hurricane Center provided this rundown of the hazards affecting land:

WIND: Hurricane conditions are expected in portions of Maui County today, on Oahu by this afternoon, and on Kauai and Niihau tonight. Tropical Storm conditions are imminent across the Big Island. Due to the steep terrain of the islands, hurricane-force wind gusts are possible even within the tropical storm warning area.

STORM SURGE: The combination of higher than predicted water levels, dangerous storm surge, and large breaking waves will raise water levels by as much as 3 feet above normal tides near the center of Douglas.

RAINFALL: Heavy rainfall associated with Douglas is expected to affect portions of the main Hawaiian Islands from early this morning into Monday. Total rain accumulations of 5 to 10 inches are possible from Maui County westward to Kauai County, with the greatest amounts up to 15 inches in elevated terrain. This rain may result in life-threatening flash flooding and land slides, as well as rapid water level rises on small streams. Douglas could produce an additional 2 to 4 inches of rainfall over the northern half of the Big Island.

UPDATE – The Hawaiʻi County Civil Defense this stated that “observation reports throughout the island by the Hawaii County Police and Fire Departments report that all roads are open and no heavy rains, strong winds, nor damaging surf conditions during the night and early morning hours.”

“Conditions will continue to worsen across parts of the Big Island and Maui in the next few hours as Hurricane Douglas near these islands,” reported the National Weather Service in Honolulu this morning. “After Maui County and the Big Island, Oahu will start feeling the effects of Douglas this afternoon and this evening, followed by Kauai late tonight and early Monday morning. There is little change in the forecast track, which passes just north of the Big Island shortly after sunrise, and Maui later this morning, then near or moving over the rest of the main Hawaiian Islands through the rest of today and tonight. Heavy rains with potential flash flooding, strong, damaging, and shifting winds will accompany Douglas. A Flash Flood Watch is currently in effect for all Hawaiian Islands through Monday.”

From the Central Pacific Hurricane Center discussion at 5 a.m. HST:

Hurricane Hunters from the Air Force 53rd Weather Reconnaissance Squadron spent most of the night with Douglas, making 5 passes through the center. The final pass contained some of the strongest winds of the entire mission, with flight-level winds near 100 kt, SFMR winds up to 79 kt, and a relatively steady pressure reading near 983 mb. The initial intensity was maintained at 80 kt based on these valuable data points. Also of extreme value is the fact that the low-level center is south of the apparent center seen in conventional satellite imagery, and closer to the islands than might be otherwise expected. Although island-based radars are also detecting Douglas’ circulation, they are sampling the upper portions of the cyclone that are sheared northward due to southerly vertical wind shear.

Despite the vertical wind shear, Douglas has been slow to weaken, and this trend will continue today as Douglas passes near, or potentially over, the islands. Steadily increasing SSTs along the forecast track are expected to limit the rate of weakening, while the noted vertical wind shear may be confined to the upper-levels. While Douglas is on the western edge of a ridge aloft, leading to high-level southerly shear, a mid-level ridge is expected to build westward to the north of Douglas through Monday, likely allowing the low- to mid-level core of the cyclone to remain intact. The updated intensity forecast once again closely follows the consensus IVCN, and maintains Douglas as a hurricane until it passes west of the islands. Steady weakening will occur thereafter due to persistent southwesterly shear.

The mid-level ridge will continue to drive Douglas toward the west-northwest, with the current motion vector estimated to be 285/14 kt. The forecast track takes the center of Douglas dangerously close to the islands from Maui to Kauai through tonight, where a Hurricane Warning is in effect. The updated forecast track is very close to the previous forecast and the high-performing ECMWF guidance, and anticipates some acceleration toward the west in the later periods as the increasingly shallow system gets steered by the low-level trade wind flow.

1. Douglas will pass dangerously close to, or over, the islands today, bringing a triple threat of hazards, including but not limited to damaging winds, flooding rainfall, and dangerously high surf, especially along east and north facing shores.

2. It is remains important that you do not focus on the exact forecast track of Douglas. Due to Douglas’ angle of approach to the islands, any wobble in the track could lead to significant differences in where the worst weather occurs. Even if the center remains offshore, severe impacts could still be realized over the islands, as they extend well away from the center.