video from the 11 a.m. media briefing with the Central Pacific Hurricane Center, edited by BIVN

HAWAIʻI ISLAND - Hurricane Douglas will be affecting the main Hawaiian islands through Monday morning, although it appears as if Hawaiʻi island has avoided the worst of it. 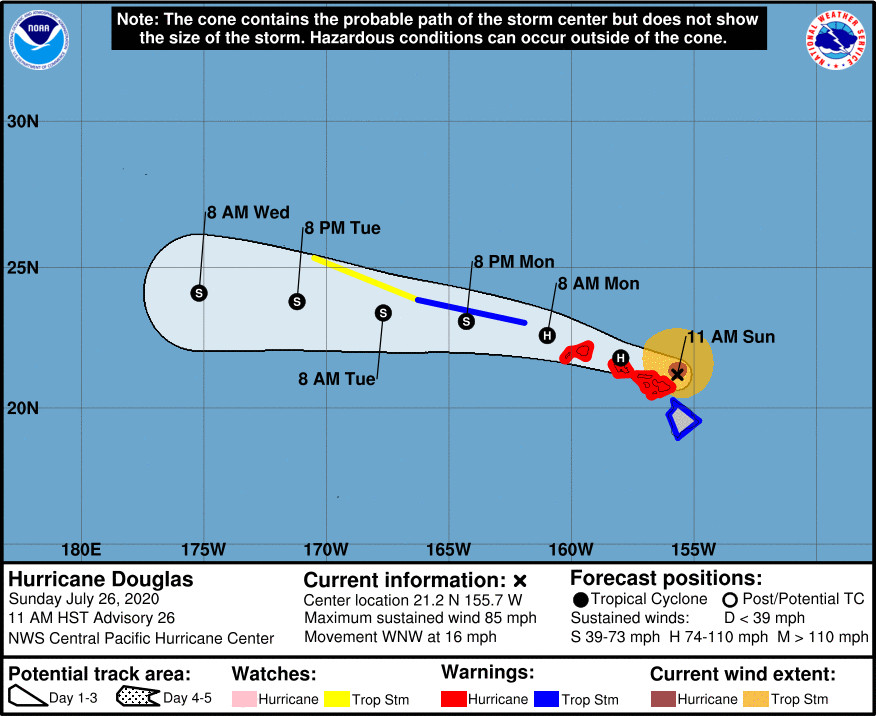 (BIVN) – As of 11 a.m. Sunday, Hurricane Douglas is directly north of Hawaiʻi island, and 55 miles east northeast of Kahului on Maui. The storm has weakened slightly, with its maximum sustained winds down about 5 mph (from 90 mph to 85 mph with higher) gusts. Gradual weakening is forecast during the next 48 hours, but Douglas is expected to remain a hurricane as it moves through the islands.

A Tropical Storm Warning is in place for Hawaiʻi island. The Central Pacific Hurricane Center says the warning means that tropical storm conditions are expected somewhere within the warning area, in this case imminently on Hawaii County.

Douglas is moving toward the west-northwest near 16 mph (26 km/h), and this motion is expected to continue over the next couple of days. On the forecast track, Douglas will pass near, or over, the islands from Maui to Kauai today and tonight.

Hawaiʻi island appears to have avoided the worst of the storm. On the southern side of the Big Island, for example, Hawaiʻi Volcanoes National Park announced it will reopen at noon today. There are no reports of damage in the park due to the storm.

From the Central Pacific Hurricane Center discussion at 11 a.m. HST:

Hurricane Hunters from the Air Force 53rd Weather Reconnaissance Squadron are back out sampling Douglas. The hurricane has been resilient, with deep convection persisting to the west and north of the center under increasing vertical wind shear. The Hurricane Hunters have found that the center pressure has risen slightly, and a blend of SFMR and adjusted flight level winds supports lowering the initial intensity to 75 kt. Island-based radars are detecting the mid-level circulation of Douglas, which could be tilted slightly to the north due to the wind shear.

Hurricane Hunter data was essential in determining the initial motion of 290/14 kt. Douglas will continue to be steered by a low- to mid-level ridge toward the west-northwest during the next couple of days, taking the center dangerously close to the islands from Maui to Kauai through tonight, where a Hurricane Warning remains in effect. The updated forecast track was changed little from the previous forecast and remains near the southern edge of a tightly clustered guidance envelope during the next couple of days. By day three, an acceleration toward the west is expected as the increasingly shallow system is steered along the low-level trade winds.

1. Douglas will pass dangerously close to, or over, the islands today and tonight, bringing a triple threat of hazards, including but not limited to damaging winds, flooding rainfall, and dangerously high surf, especially along east facing shores.

2. It is remains important that you do not focus on the exact forecast track of Douglas. Due to Douglas’ angle of approach to the islands, any wobble in the track could lead to significant differences in where the worst weather occurs. Even if the center remains offshore, severe impacts could still be realized over the islands, as they extend well away from the center.