Hurricane Douglas Moves Away, Hawaiʻi “Dodged Yet Another Bullet”

HAWAIʻI - Hurricane Douglas is no longer a threat to the State of Hawaiʻi, and all field reports show no impacts to the Big Island. 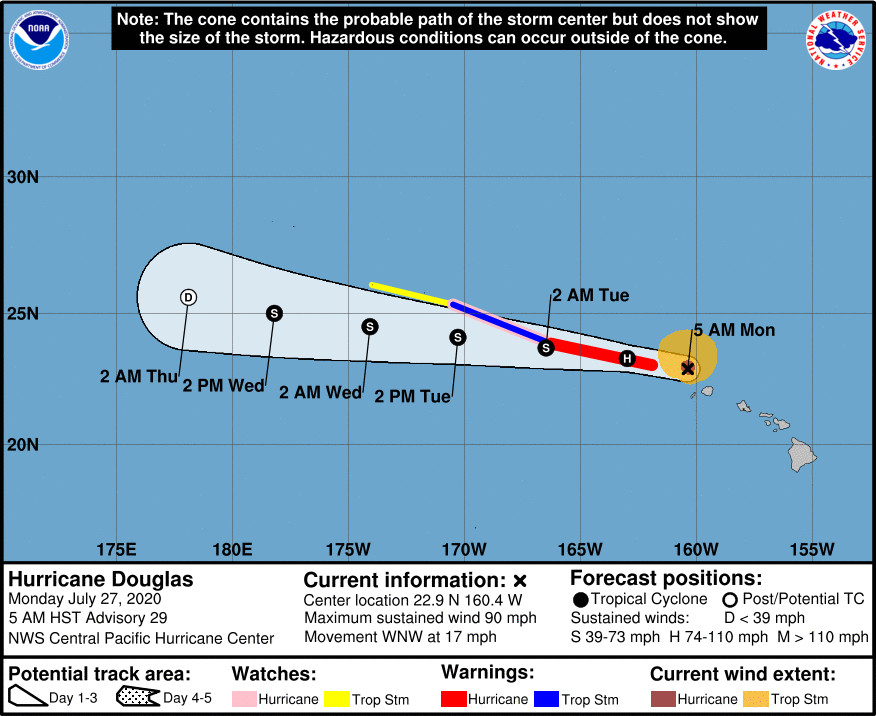 (BIVN) – As of 5 a.m. Monday morning, the center of Hurricane Douglas was 90 miles northwest of Lihue, and moving toward the west-northwest near 17 mph.

“The most important thing to note is the main Hawaiian Islands have dodged yet another bullet from a hurricane landfall, which we are thankful for today,” said Robert Ballard with the Central Pacific Hurricane Center in Honolulu.

As of this morning, “Douglas was still moving toward the west northwest, which we’re happy to see,” Ballard said, “away from the islands, on its merry way at about 17 miles per hour.”

“The maximum sustained winds in Douglas are still about the same as they’ve been, 90 mph, as it tracks away from the islands,” Ballard noted, “which just goes to show you that not every hurricane that comes into the local Hawaiian waters is going to be weakening.”

Ballard also said “there are no watches and warnings, I’m happy to say, for the main Hawaiian Islands. Those have all been discontinued as of 2 o’clock this morning.”

All field reports show no impacts to the Big Island, reported the Hawaiʻi County Civil Defense on Monday morning. All services and activities will open per their normal schedules, the agency said.

There are still tropical storm warnings, hurricane watches, and hurricane warnings for portions of the Papahanaumokuakea National Monument.

For today, the National Weather Service says “a high north of the area will maintain locally breezy trade winds over the area. Showers will be focused over mainly windward areas with afternoon and evening showers over the lee slopes over the Big Island of Hawaii.”