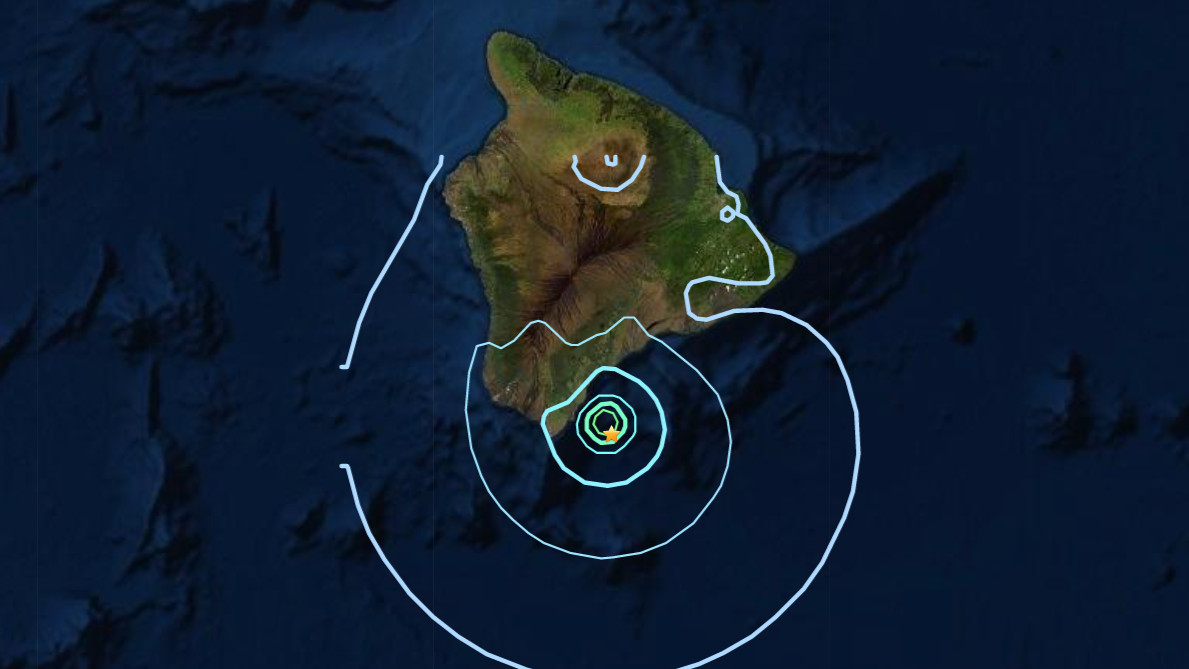 HAWAIʻI ISLAND - An earthquake that occurred just south of Kaʻū was felt across Hawaiʻi island on Monday morning.

(BIVN) – Hawaiʻi island was rattled by an earthquake on Monday morning, just after 6 a.m. HST.

UPDATE – (6:54 a.m. HST) – The USGS Hawaiian Volcano Observatory, after reviewing the earthquake data, revised the event to a Magnitude 4.7.

The earthquake was located under the ocean, between the Lōʻihi seamont and the South Point-area of Hawaiʻi island, at a depth of 21.7 miles. It was felt across Hawaiʻi island.

The Pacific Tsunami Warning Center said that a tsunami was not expected from the event, however some areas may have experienced shaking.

“As in all earthquakes, be aware of the possibility of after-shocks,” said the Hawaiʻi County Civil Defense in a message issued after the temblor. “If the earthquake was strongly felt in your area, precautionary checks should be made for any damages; especially to utility connections of Gas, Water, and Electricity.”

The USGS Hawaiian Volcano Observatory issued a media release, saying that light shaking, with maximum Intensity of IV, has been reported across parts of the Island of Hawai‘i. At that intensity, significant damage to buildings or structures is not expected.

“We see no detectable changes in activity at the summits or along the rift zones of Mauna Loa or Kīlauea as a result of this earthquake,” said HVO acting-Scientist-in-Charge, David Phillips, who added that “aftershocks are possible and could be felt.” HVO continues to monitor Mauna Loa and other Hawaiian volcanoes for any changes.

USGS said “the depth, location, and recorded seismic waves of the earthquake suggest a source due to bending of the oceanic plate from the weight of the Hawaiian island chain, a common source for earthquakes in this area.”