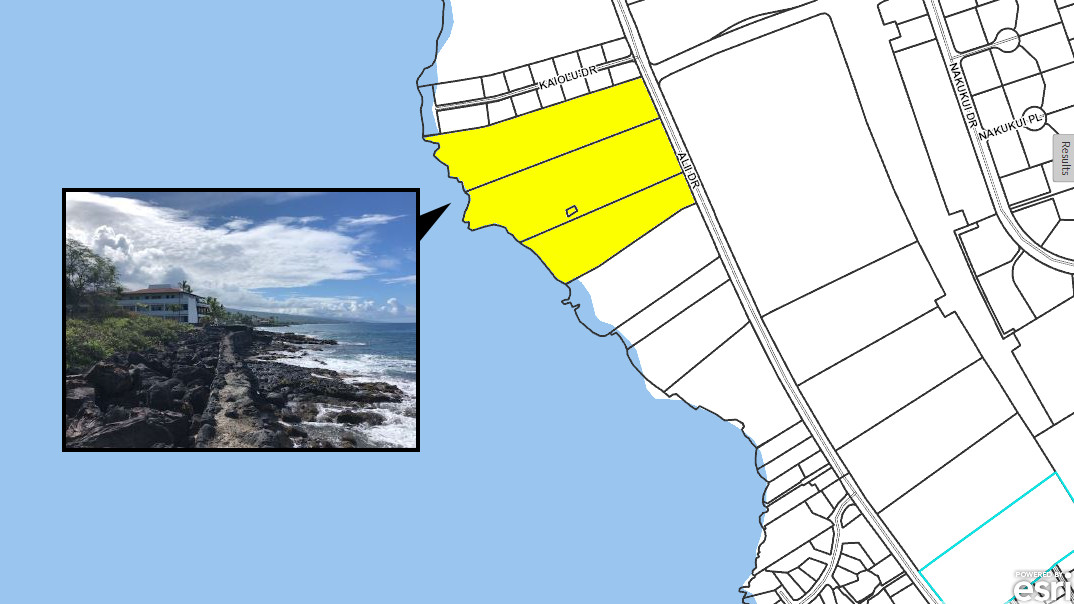 graphic by BIVN combined a photo of the area courtesy the County of Hawaiʻi and a TMK map showing the purchased parcels in yellow.

Over 12 Acres In Kona Purchased For Preservation

KONA, Hawaiʻi - The purchased lands will preserve numerous pre-historic and historic cultural sites and structures on the property, including a burial complex and the Kauakaiakaola Heiau.

The Puapua‘a properties on the makai side of Aliʻi Drive are 12.639 acres in total, and have been listed on the PONC wish list for years, the County reports. The lands will now officially belong to the people of Hawai‘i County and will remain in preservation.

According to the County:

The purchase will ensure the preservation of numerous pre-historic and historic cultural sites and structures on the property, including a burial complex and the Kauakaiakaola Heiau. The Kauakaiakaola Heiau is among the most important historic and cultural sites in the State, along with other West Hawai‘i historic sites such as Keolanāhihi, Mo‘okini Heiau, and Pu’uhonua O Hōnaunau.

These lands in West Hawai‘i were the home of pre-contact era Hawaiians, and their preservation will enable people of Hawai‘i today to better understand the past.

“The acquisition is the largest single funded open space acquisition in the history of the County’s Preservation Program,” said Mayor Harry Kim. “This purchase of a very significant tract of lands will safeguard so many historical treasures. My congratulations to everyone who worked so hard for this.”

Hawai‘i County Council Member Rebecca Villegas, who represents Council District in which the newly-acquired lands lie, said: “It’s been honor to play even a small part in bringing this auspicious purchase to fruition during my first term in office. I’ve driven past this property thousands of times and always dreamed of it becoming a park for our community. Thank you to all the hands and hearts that have worked for decades to bring this purchase to fruition. I look forward to working side by side with the lineal descendants, cultural practitioners and other stake holders to restore this property and preserve our coastline.”

The $10.7 million cost for the parcels comes from 2% of real property taxes earmarked annually for the County’s Preservation Fund.

The Puapua‘a properties are on the north side of the Casa de Emdeko Condominiums, and contain these tax map key parcels: