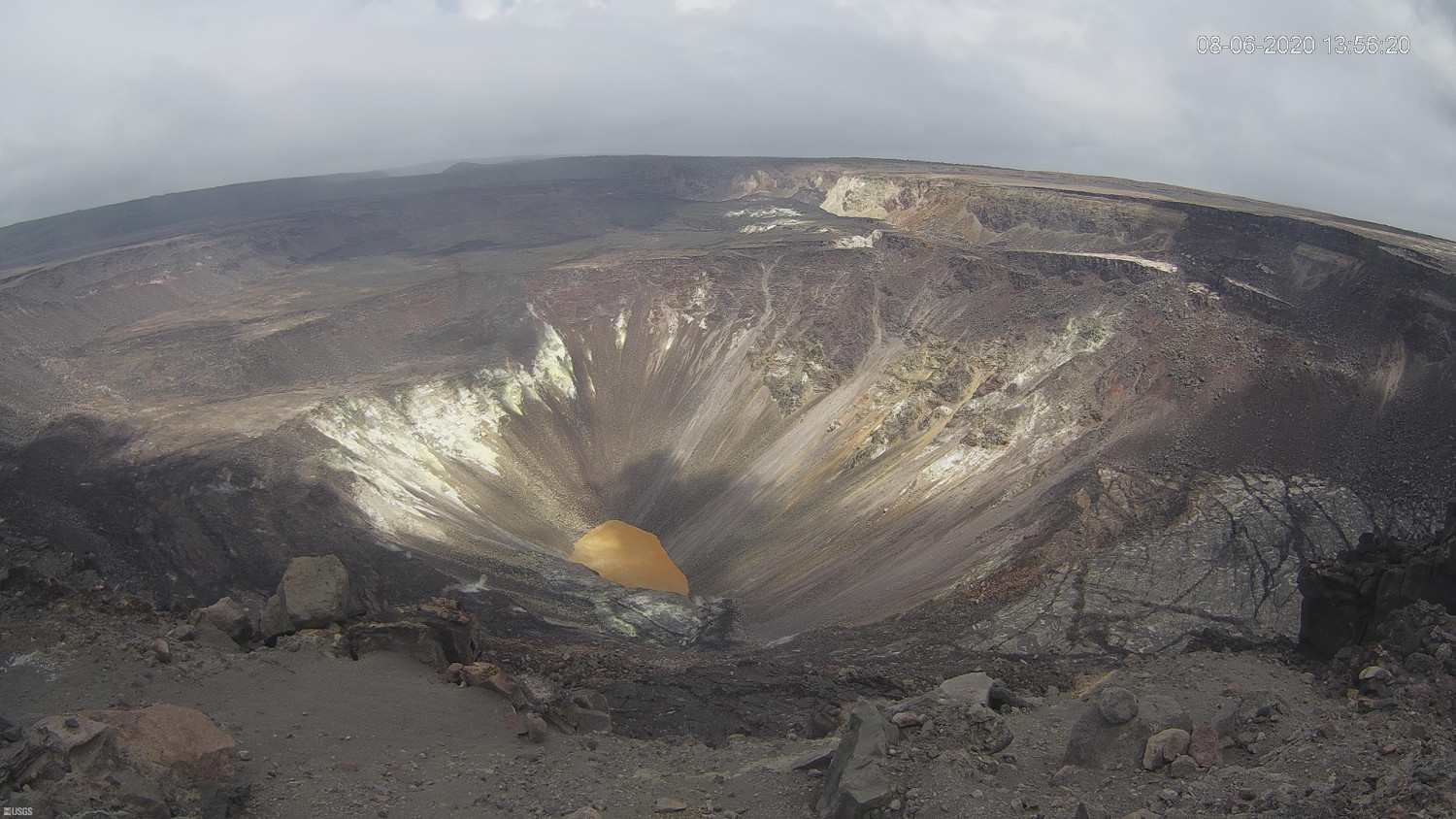 Halemaʻumaʻu and the crater water lake, seen from the west rim of the new summit collapse features on a USGS HVO webcam. 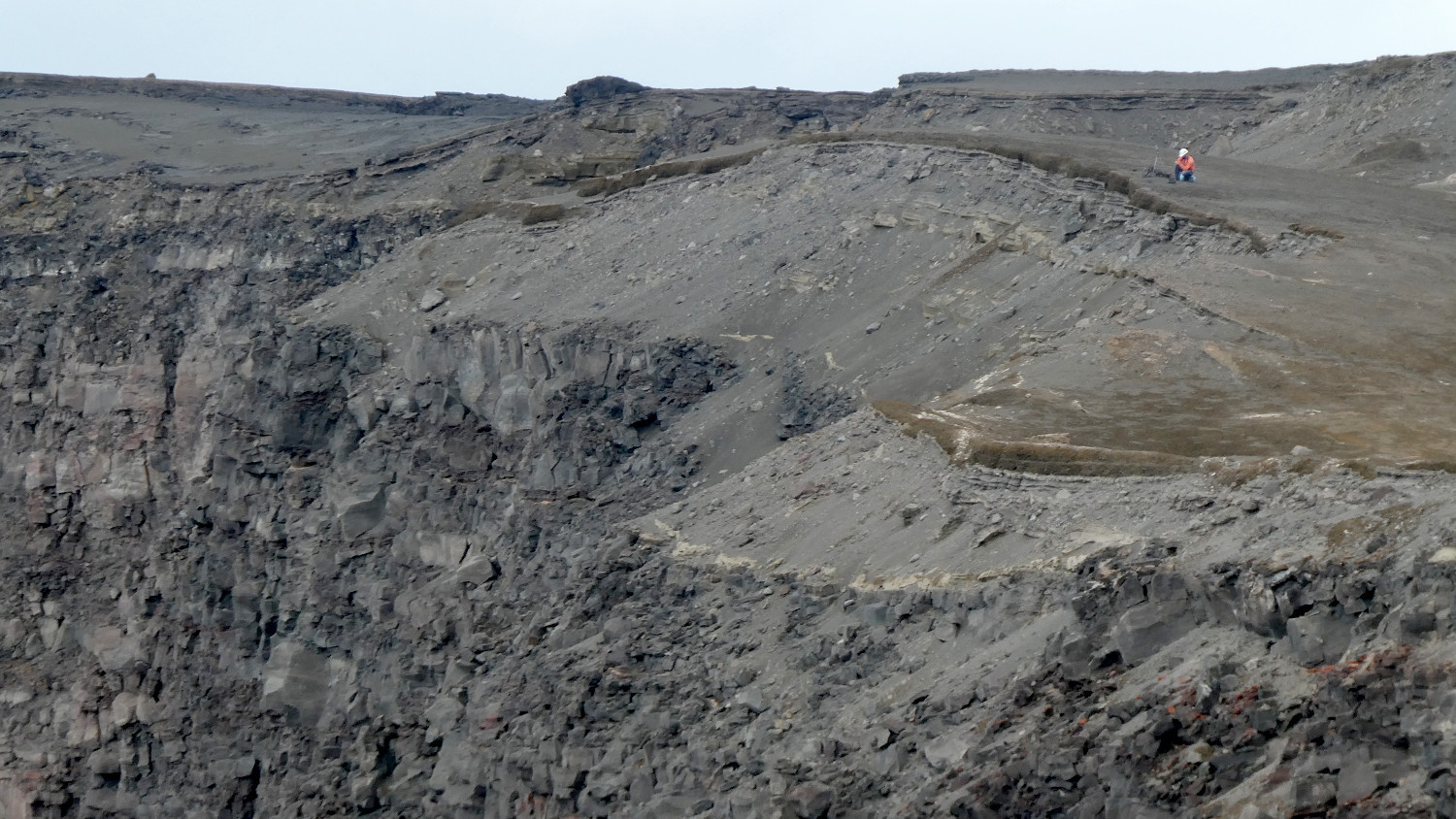 “An HVO geologist collects GPS data on the western rim of Kīlauea’s summit caldera. The geologist is standing upon a thick sequence of tephra deposits formed during explosive eruptions at Kīlauea’s summit between about 1500 CE and the early 19th century. These layers of explosive deposits cap a much thicker sequence of lava flows (bottom and left portion of the photo), formed before 1500 CE. Research in recent years has shown that Kīlauea’s summit alternates between explosive and non-explosive (lava flow dominated) periods. The tall cliff in the lower left portion of the image formed during the collapses of the caldera floor in 2018.” – USGS photo by M. Patrick.

(BIVN) – Kīlauea Volcano is not erupting, and in its monthly summary, the USGS Hawaiian Volcano Observatory said monitoring data have shown no significant changes in volcanic activity in July.

There was “variable but typical rates of seismicity and ground deformation, low rates of sulfur dioxide emissions, and only minor geologic changes since the end of eruptive activity in September 2018,” the scientists said.

From the monthly update posted on Thursday, August 6:

There were fewer than 1100 earthquakes during the month of July at Kīlauea, an approximate 10 percent decrease in the number of earthquakes detected in July. Of these, two were stronger than magnitude-4 earthquakes, with focal mechanisms consistent with slip along the south flank basal detachment.

Over the past month, summit tiltmeters recorded 16 deflation-inflation events–an increase over last month’s total. In the middle East Rift Zone, the increased deformation rates that began in March 2020, consistent with an episode of rift inflation west of Highway 130, and that lessened and flattened during May, have returned to their pre-March trend. The long-term trend of deformation at Kilauea’s summit and middle East Rift Zone continue to show inflation, consistent with magma supply to the volcano’s shallow storage system. GPS stations on Kīlauea’s south flank continue to show elevated rates of seaward motion. HVO continues to carefully monitor all data streams along the Kīlauea East Rift Zone and south flank for important changes.

Sulfur dioxide emission rates are low at the summit, consistent with no significant shallowing of magma. Some amount of sulfur dioxide is being dissolved into shallow groundwater and the crater lake at the bottom of Halema’uma’u; work continues to try and quantify this process. As of July 31st, the lake depth was approximately 41 meters or 135 feet. The crater lake was last sampled by UAS in January and additional sampling with UAS is planned. Sulfur dioxide emission rates are below detection limits at Puʻu ʻŌʻō and the lower East Rift Zone 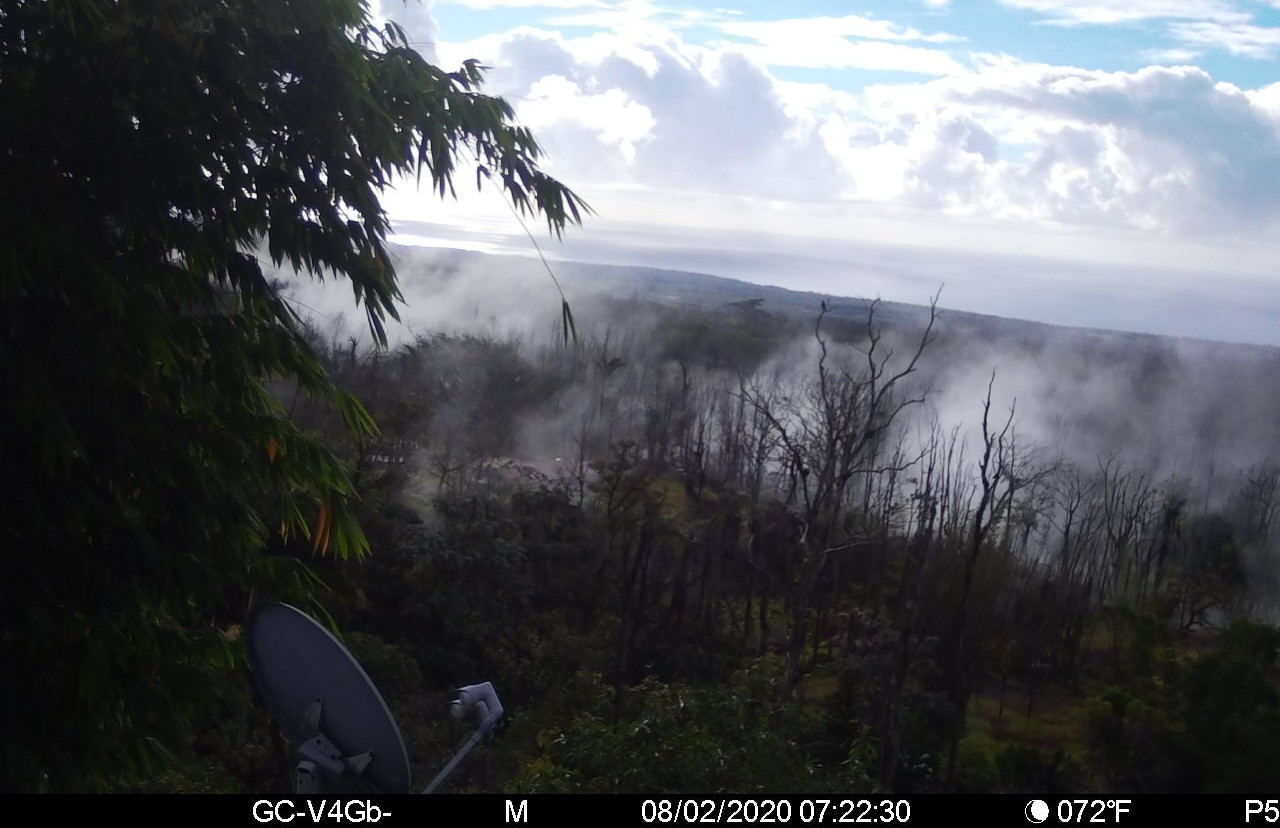