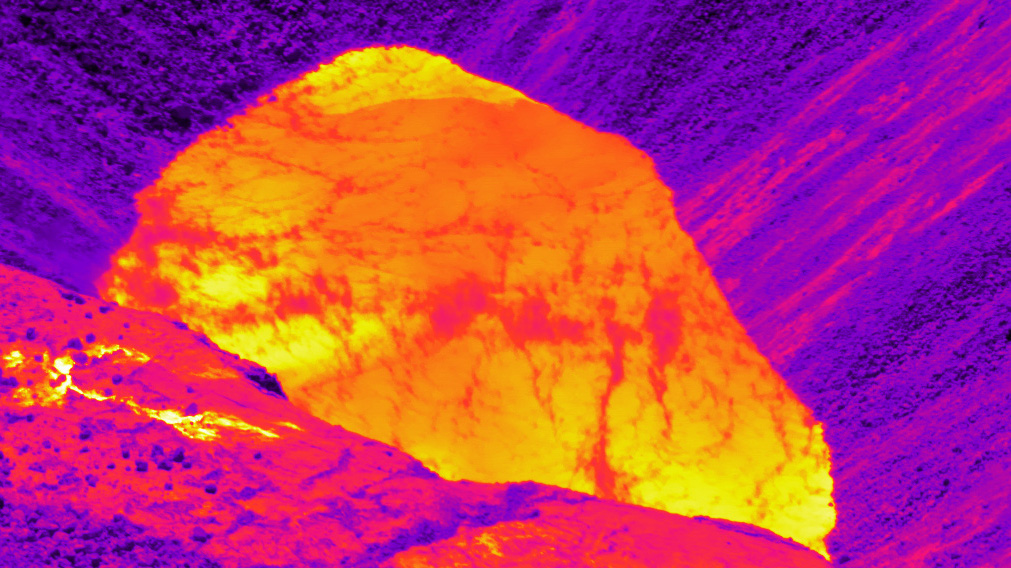 HAWAIʻI VOLCANOES NATIONAL PARK - Tracking the temperature of the year-old crater lake at the summit of Kīlauea can be an important tool to help monitor volcanic activity, scientists explain.

(BIVN) – As the USGS Hawaiian Volcano Observatory marks one year of monitoring the new crater lake at the summit of Kīlaeua, scientists have devoted another Volcano Watch article to the fascinating water feature.

This time, the focus is on the temperature of the lake. USGS HVO wrote:

The recent first anniversary of the appearance of water at Kīlauea’s summit is a reminder of how much has changed since the end of the 2018 eruption and summit collapse.

Surface water at the summit has highlighted the potential for future hazards at the summit. Magma interacting with near-surface water can, in some circumstances, trigger steam-blast explosions.

The USGS Hawaiian Volcano Observatory (HVO) continues to closely monitor the summit region and is keeping a keen eye on the new lake itself, as it may provide another useful “window” into what’s happening beneath the surface.

Lake level is tracked regularly with a laser rangefinder, and visual observations record changes in water color and circulation patterns. Water chemistry has been analyzed in samples collected by two unoccupied aircraft systems (UAS) missions. A continuously operating thermal camera was installed late last year to keep watch on temperature changes in the lake around the clock. We also use a handheld thermal camera during field visits to make more detailed measurements of lake temperature.

But what are those cameras telling us? Just how hot is the water?

It turns out, the lake temperature can be a little difficult to measure. Right away, it was evident that the steam rising from the water surface (and mixing with air) was much cooler than the water, and the steam layer was thick enough that it masked much of the underlying water surface.

Seeing through these gaps in the steam is key. Collecting and analyzing hundreds of images at a time provides the best chance to capture the occasional views through the steam and get an estimate of the hot, underlying water surface. The initial results in late 2019 showed maximum temperatures of 70–75 degrees Celsius (158–167 degrees Fahrenheit).

Later, a higher-resolution thermal camera was used and showed higher values, with maximum temperatures around 80–85 degrees Celsius (176–185 degrees Fahrenheit). The higher resolution seemed to be better at seeing through the gaps in the steam. On numerous occasions we used both the low and high-resolution cameras at the same time to confirm that the higher resolution camera showed systematically higher temperatures—in other words, the comparison between the two cameras rules out a real rise in the lake temperature.

These estimates were confirmed by a UAS flight in January. The UAS carried a tiny thermal camera, and hovered just yards above the surface, where steam is much less of a problem. The maximum temperature in the images was about 85 degrees Celsius (185 degrees Fahrenheit).

The thermal images over the past year show that the temperature isn’t uniform across the surface. Hot zones are observed in several spots along the lake margin, and time-lapse imagery shows that these areas appear to be zones where groundwater enters the lake. The center of the lake is generally the coolest.

However, these values only represent the surface temperature, and it is still unknown how hot the lake is beneath the surface. Future UAS flights may carry a temperature probe to measure this.

How do these temperatures compare to those of other volcanic lakes worldwide? The answer: Kīlauea’s summit lake is definitely a hot one.

Globally, only a few volcanic lakes have surface temperatures greater than 80 degrees Celsius (176 degrees Fahrenheit). So why is Kīlauea’s water lake so hot? One likely factor is residual heat in the collapse rubble at the base of Halemaʻumaʻu, from rock that was heated by the lava column prior to the 2018 collapse. The nearby hot (at least 150 degrees Celsius—302 degrees Fahrenheit) gas vents (fumaroles) are another potential explanation for the high temperatures.

HVO will continue to track the lake temperature, as one of many tools that include seismic, gas, and ground deformation monitoring. This thermal monitoring will help us detect if and when Kīlauea decides to turn up the heat.