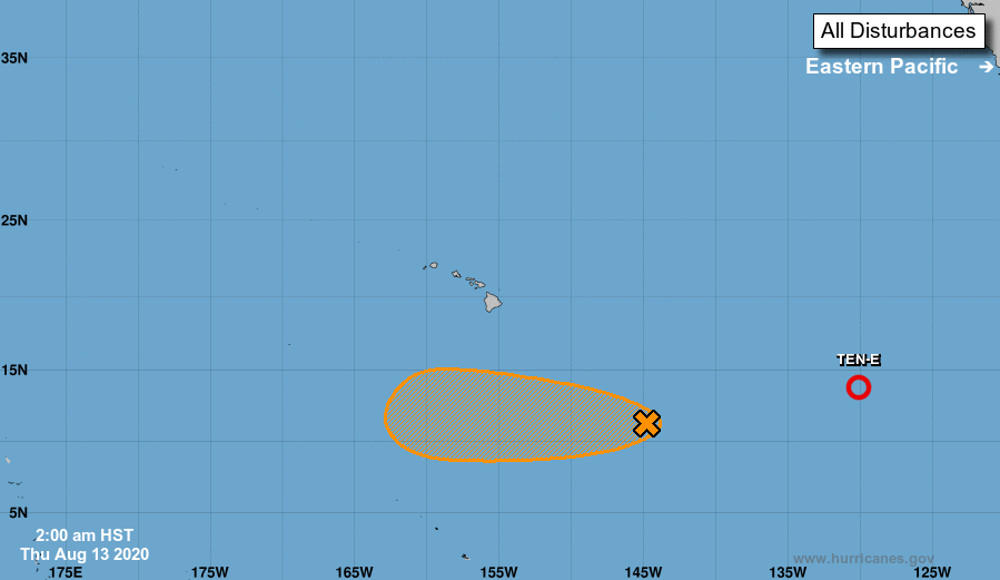 Uptick In Tropical Activity Over Pacific Not Forecast To Threaten Hawaiʻi

HONOLULU, Hawaiʻi - A handful of potential storm systems in the Eastern and Central Pacific are not forecast to intensify and approach the Hawaiian islands.

(BIVN) – There has been an uptick in tropical activity in the Eastern and Central Pacific in recent days, but weather forecasters are not reporting any immediate threats to Hawaiʻi.

Tropical Depression Ten-E has formed in the Eastern Pacific. The system is moving westward but is not expected to strengthen very much.

The updated National Hurricane Center intensity forecast “still shows the depression becoming a tropical storm in the next 12 hours, but then weakens the system back to a depression in 2-3 days through the end of the 5-day  period. It’s also entirely possible that the system becomes a remnant low at some point, since it may be difficult for organized deep convection to be maintained.”

Meanwhile, “an elongated area of low pressure” located in the Central Pacific around 900 miles southeast of Hilo could slowly develop as the system moves slowly westward. “Environmental conditions are expected to become more conducive for development over the next several days as the system moves slowly westward,” according to the National Hurricane Center, but development – if any – will be slow to occur, forecasters say.

There are also other disturbances in the Eastern Pacific, closer to the coast of Mexico.