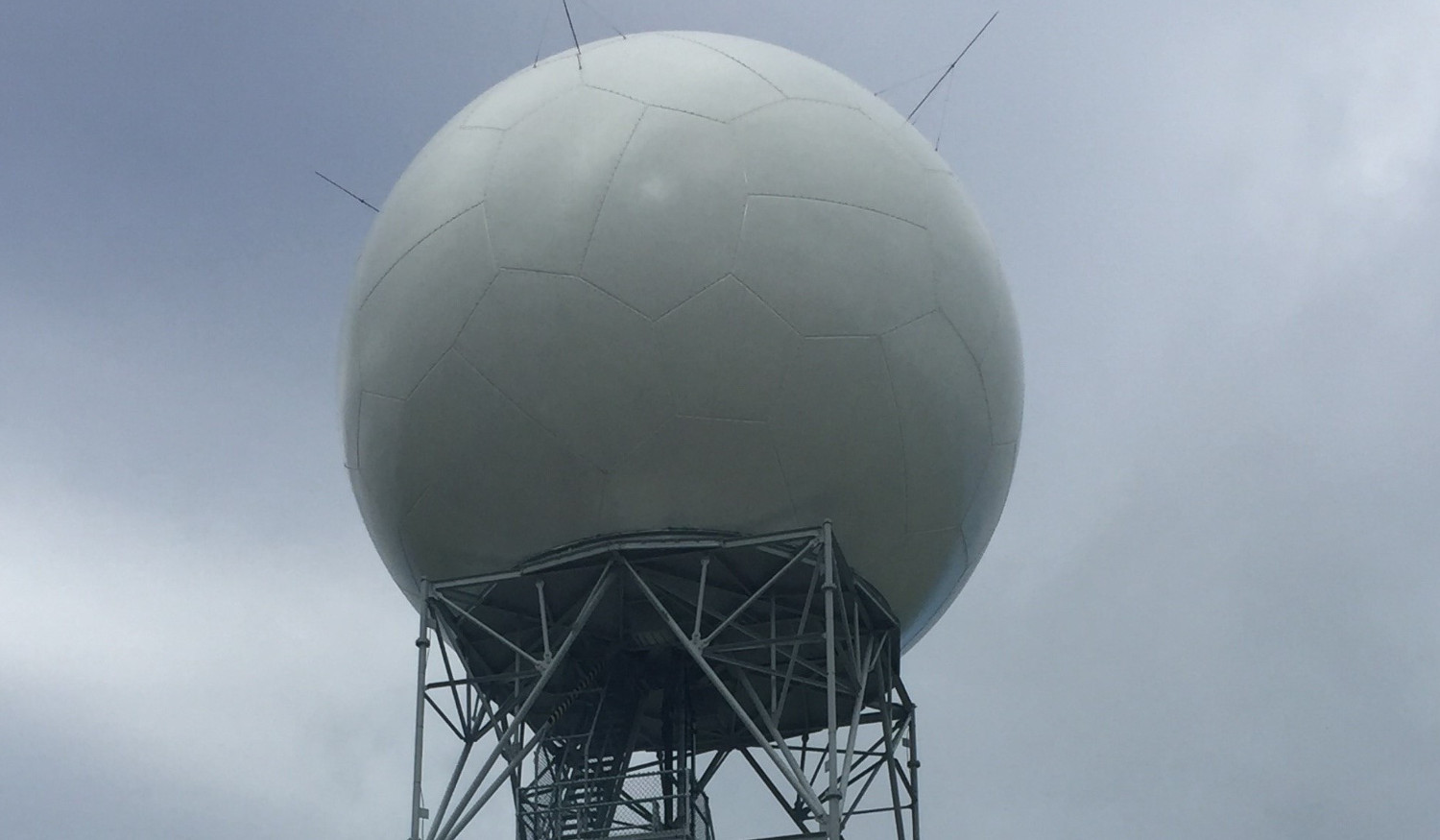 VOLCANO WATCH: The Doppler Radar In Kaʻū Is More Than A Weather Radar

KAʻŪ, Hawaiʻi - This week's Volcano Watch article explains the use of the Nāʻālehu Weather Surveillance Doppler radar in tracking the volcanic ash plumes in the summer 2018. 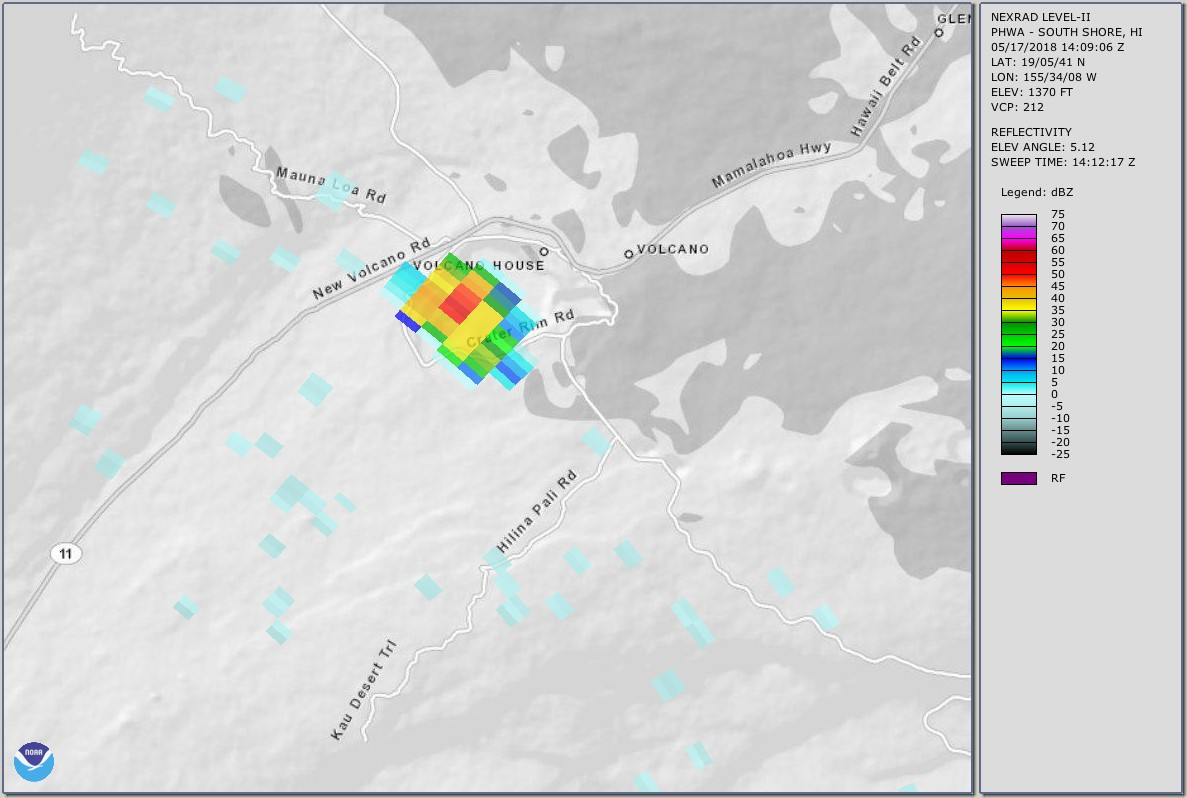 USGS: Radar image of the May 17, 2018 eruption of ash from Halemaʻumaʻu Crater. This image is a slice through the cloud at an altitude of 14,000 ft (4 km) above sea level at 4:12 a.m., HST. The colors scale is radar reflectivity, a measure of the size of the particles and their concentration within the ash cloud. Colors indicate the different echo intensities or reflectivity. Reflectivity is the amount of transmitted power returned to the radar receiver, and because it occurs over a wide range, a logarithmic (or decibel, dBZ) scale is used. Data could also be displayed in cross section to estimate the height of the cloud.

From the USGS Volcano Watch article:

Driving Highway 11 from Volcano to Wai‘ōhinu on sunny, vog-free days, it’s hard to miss that bright white soccer ball on the slope of Mauna Loa above Pāhala Town.

The curious white orb is the radome (housing) of the South Hawaii or Nāʻālehu Weather Surveillance Doppler radar installation owned by the Federal Aviation Administration (FAA) and operated by the National Oceanic and Atmospheric Administration (NOAA)’s National Weather Service (NWS). It is one of two such facilities on the Island of Hawai‘i; the other sits atop Kohala to the north.

The radar’s job is to scan the atmosphere rapidly in all directions to locate and track weather clouds. Around the clock, the resulting information, maps and animations of the intensity of radar returns from the atmosphere extending more than 100 miles (161 km) from the site. In the case of station PHWA, or the Nāʻālehu radar, this extends from well southwest of South Point sweeping counterclockwise northeast off Cape Kumukahi and Hilo Bay. Data are displayed for all to see on a NOAA website.

Radar is a very useful tool because it penetrates clouds where the radar energy bounces off particles within the atmosphere and returns to the antenna. The strength of the return signals (known as reflectivity) are directly related to size and concentration of reflectors (usually rain droplets or ice particles). These data are used daily by weather forecasters, mariners, and anyone wanting helpful information on weather conditions and related hazards such as thunderstorms, hail, tornadoes, heavy rain, or flash flooding.

In 2018, this radar provided an additional service to Hawaii residents. Data from the Nāʻālehu installation assisted the USGS Hawaiian Volcano Observatory (HVO), NWS, and other agencies to rapidly detect and characterize ash clouds that erupted from Kīlauea Volcano’s Halemaʻumaʻu Crater repeatedly in May and June. Although not strictly weather clouds, these plumes of rock, mineral, and glass particles behaved a lot like normal meteorological clouds: they rose through the atmosphere, mixing with or punching through the existing weather cloud deck, and then drifted downwind.

By examining the radar snapshot of the clouds within minutes of formation, NWS and HVO could estimate the maximum height of the cloud and then use a computer model to visualize where the cloud would move and how much ash might fall. This capability was especially useful at night when direct visual observations were not possible.

Most of the 2018 clouds were not very energetic as volcanic ash plumes go, rising less than 10,000 ft (3 km) above the ground and producing only a trace of ashfall (about the thickness of a dime—less than 1 mm or 0.04 in) as they drifted downwind, typically to the southwest with the trade winds. A few, however, contained more significant amounts of ash and left irritating amounts in the Ka‘ū Desert and communities downwind including Pāhala, Nāʻālehu, Ocean View, and possibly farther.

The tallest cloud was produced in the predawn hours of May 17, 2018. Based on radar, it reached as high as 30,000 ft (9 km) above sea level, well above the elevations of the summits of Mauna Kea and Mauna Loa! Portions of the cloud moved northeast dropping ash on the Kīlauea summit area including the Volcano Golf Course and Volcano Village.

Although a towering and impressive cloud, characteristics of the radar imagery and the resulting fallout pattern indicate that the upper portion of this cloud was ash-poor and consisted primarily of water or ice droplets. This is not surprising, as condensation of water high in an eruption cloud is a well-known occurrence in ash-producing eruptions worldwide.

In early 2020, the Nāʻālehu radar was upgraded with a new pedestal to hold up the radar antenna and new internal electronics, communications, and other components. The work is part of a larger program of NOAA, the FAA, and the Department of Defense to refurbish all Doppler installations across the nation.

Here in Hawaii, we can rest assured that should Kīlauea again produce ash clouds of any significance, the Nāʻālehu radar stands guard, 24/7, to assist in rapid response. For more information about how a Doppler radar works, see this informative NWS website. 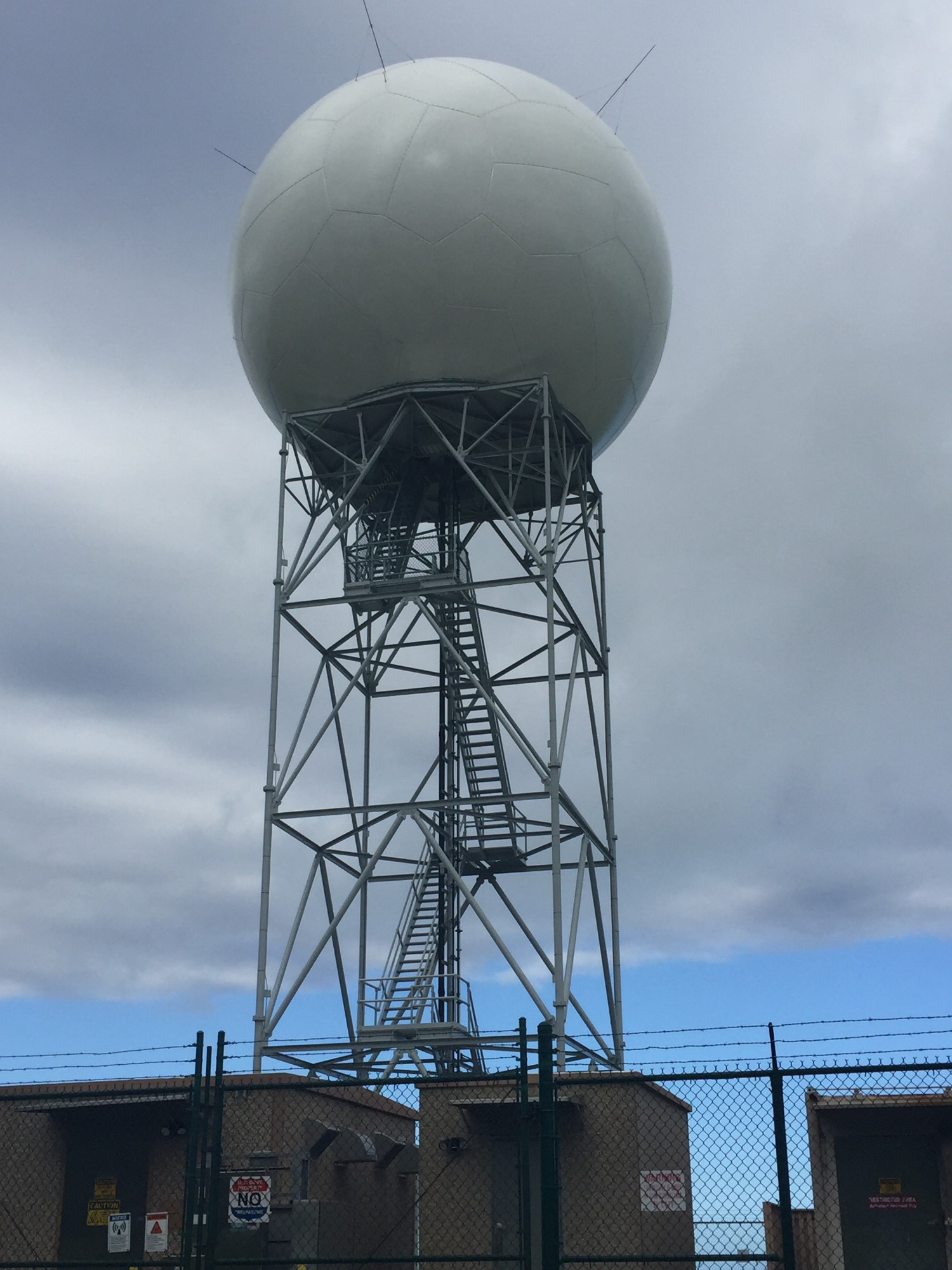