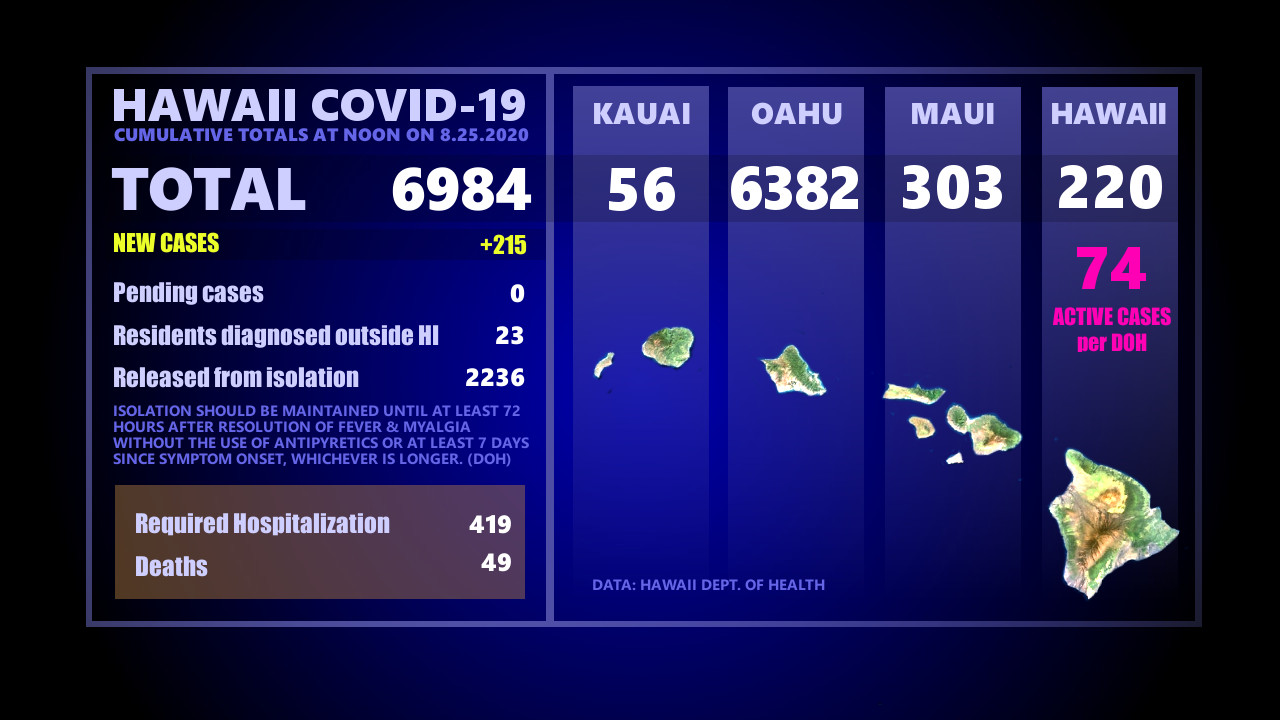 HAWAIʻI - There was another day with over 200 newly reported cases statewide, and another 11 reported on Hawaiʻi island, as of noon on Tuesday. 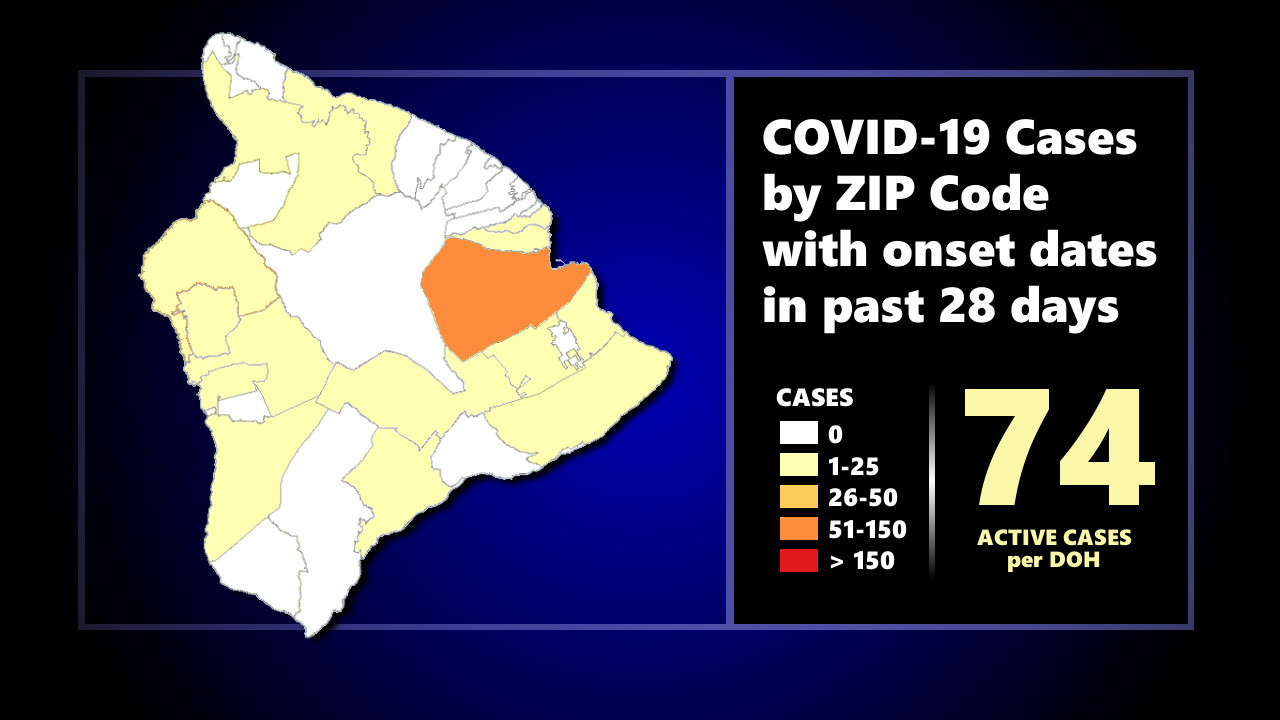 BIVN graphic features the number of “active” cases as reported by the State of Hawaiʻi on Tuesday at noon, and a map showing zip code areas with reported cases having onset dates in the past 28 days according to the Hawaiʻi health department.

There are now 74 active cases on the Big Island, the Hawaiʻi health department says, as indicated by 146 of the 220 cases released from isolation.

The Hawaiʻi health department’s zip code area map for the Big Island now reflects a change in the Hilo area, which has seen a dramatic increase in new cases in recent days. The color code for Hilo is now a darker color orange, indicating that the 96720 zip code area has surpassed the 50-case threshold.

UPDATE – (4 p.m.) – According to the Hawaiʻi Department of Health, community spread is the primary source of infection among cases. The DOH stated:

Of the 215 reported cases today, 112 are attributed to community spread. Three (3) cases have travel as a risk factor, and 100 case are pending investigation. The majority of new cases are on O‘ahu, with Hawai‘i island reporting 11, and Maui reporting three (3). The new cases include 180 adults and 35 children (18 yrs. and younger). All the minors are household contacts who were exposed to positive adult cases.

The Hawaiʻi health department’s zip code area map for the Big Island now reflects a change in the Hilo area, which has seen a dramatic increase in new cases in recent days. The color code for Hilo is now a darker color orange, indicating that the 96720 zip code area has surpassed the 50-case threshold.

Video by the County of Honolulu, livestreamed on Facebook on August 25, 2020.

State, County and Federal officials today announced a new stay-at-home order for Oʻahu starting at midnight this Thursday. For the next two weeks, the U.S. Department of Health and Human Services, State of Hawaii, and the City and County of Honolulu will partner to conduct widespread COVID-19 testing on O‘ahu. The Honolulu Fire Department will lead the effort. The surge testing is set to begin on Wednesday, August 26 and will run for 12 consecutive days.

“Doing this on a massive scale can help to reset O‘ahu, break these surges, and put us on a path to recovery,” said Mayor Caldwell in a news release. “If as many as possible participate in the next two weeks, then follow up with protective action, we can beat this. The County asked for help and the Federal Government’s Coronavirus Task Force stepped up. We need to find out where the virus is in our community. The best thing to do right now is to get yourself tested, get your family tested, encourage your coworkers, neighbors, anyone in your circles to do this. Keep your circle protected and sequestered for the next 14 days. This will knock out this virus. The intent is to test as many residents as possible, guide those that test positive, and give families piece of mind with their negative results. From that point on, everyone should work to protect their circle for 14 days. Stay home, stay away from gatherings. Stay safe.”

A new “State-at-Home, Work-at-Home” order for the City and County of Honolulu goes into effect on Thursday for the following two weeks. At a news conference at the Honolulu Fire Dept. headquarters, Governor David Ige, Mayor Kirk Caldwell, U.S. Surgeon General Dr. Jerome Adams, Lt. Gov. Dr. Josh Green, and others, spoke about the need to get O‘ahu’s daily, triple-digit case numbers under control quickly. “On O‘ahu, the surge over the past few weeks threatens to stress our healthcare system beyond its capacity. We appreciate the support from the City and County of Honolulu and the federal government. This is clearly an all-country and all-community effort. The surge testing announced today, allows us to reach deeper into specific communities and to make sure we reach every single individual who has been infected. The surge testing is a game changer,” said Gov. Ige (surge testing information in story below).

The governor detailed intensive discussions he’s had with Mayor Caldwell over the past two weeks about how to flatten the curve. He explained the decision to reimpose a Stay-at-Home order was data driven. Gov. Ige said, “The mayor and I agree that we wish all of the actions and restrictions now in place would have been more successful, but we need to do more.” He again called the fight against coronavirus a marathon, that will only succeed with everyone accepting personal responsibility. Success, he concluded is through all levels of government and every member of the community working together.