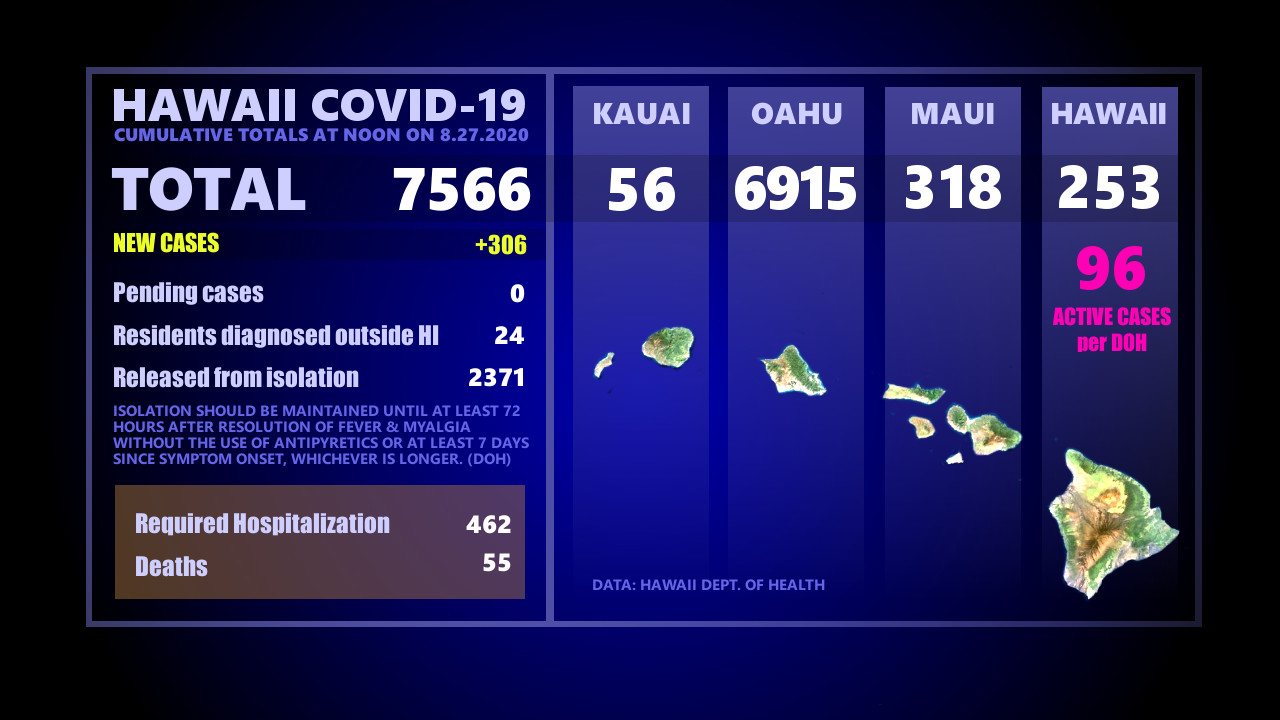 HAWAIʻI - Newly reported coronavirus cases statewide were over 300 today, with most of the cases identified on Oʻahu.

(BIVN) – The Hawaiʻi Department of Health today at noon reported 306 new cases of COVID-19 statewide, with the majority of those new cases again identified on Oʻahu.

Four new deaths were also reported today, bringing the toll in Hawaiʻi to 55 since the pandemic began. UPDATE – (4:30 p.m.) – The health department the deaths were in three (3) O‘ahu women and one (1) O‘ahu man, all who had been hospitalized with underlying medical conditions. Two of the women are in the 70 to 79-year-old age group and the other woman and the man are 80-years or older.

On Hawaiʻi island, the State reported ten (10) new cases, and said that 157 of the 253 cases have been released from isolation, indicating that 96 cases are active on the Big Island.

The County of Hawaiʻi stated in its morning civil defense message that it will ramp up efforts in its programs of disinfecting and in assisting and inspecting businesses. The County also said that the Hawaiʻi Police Department “will be adding to their patrols and enforcing the preventive policies of wearing face coverings, distancing and gatherings.”

According to the State of Hawaiʻi:

Today’s daily positivity rate for Hawaiʻi is 12% (306-cases divided by 2,478-tests). While the total number of cases reported today seems higher, the current percent of positive cases (6.8%) is approximately the same because cases are reporting earlier illness onsets and earlier specimen collection dates.

From the Hawaiʻi Department of Education:

The Hawai’i State Department of Education announced today that it will continue the Learn from Home phase of distance learning for most students statewide through the first quarter, which ends Oct. 2.

Ahead of the Aug. 17 return of students for the 2020-21 school year, the Department announced most schools would shift the majority of instruction to distance learning for at least the first four weeks of the academic year. This extends that by three weeks for the remainder of the first quarter.

During the Learn from Home phase, schools will continue offering learning hubs on campus to provide connectivity for students who need it. Schools will also continue educational programming for vulnerable students as previously identified.

Complex area superintendents will work with school principals to develop transition plans for the second quarter, with considerations for community-specific needs.

The Department will continue to work closely with state, county and health officials to assess if and when students can safely return to in-person blended learning models. As decisions are made, schools will communicate with families.