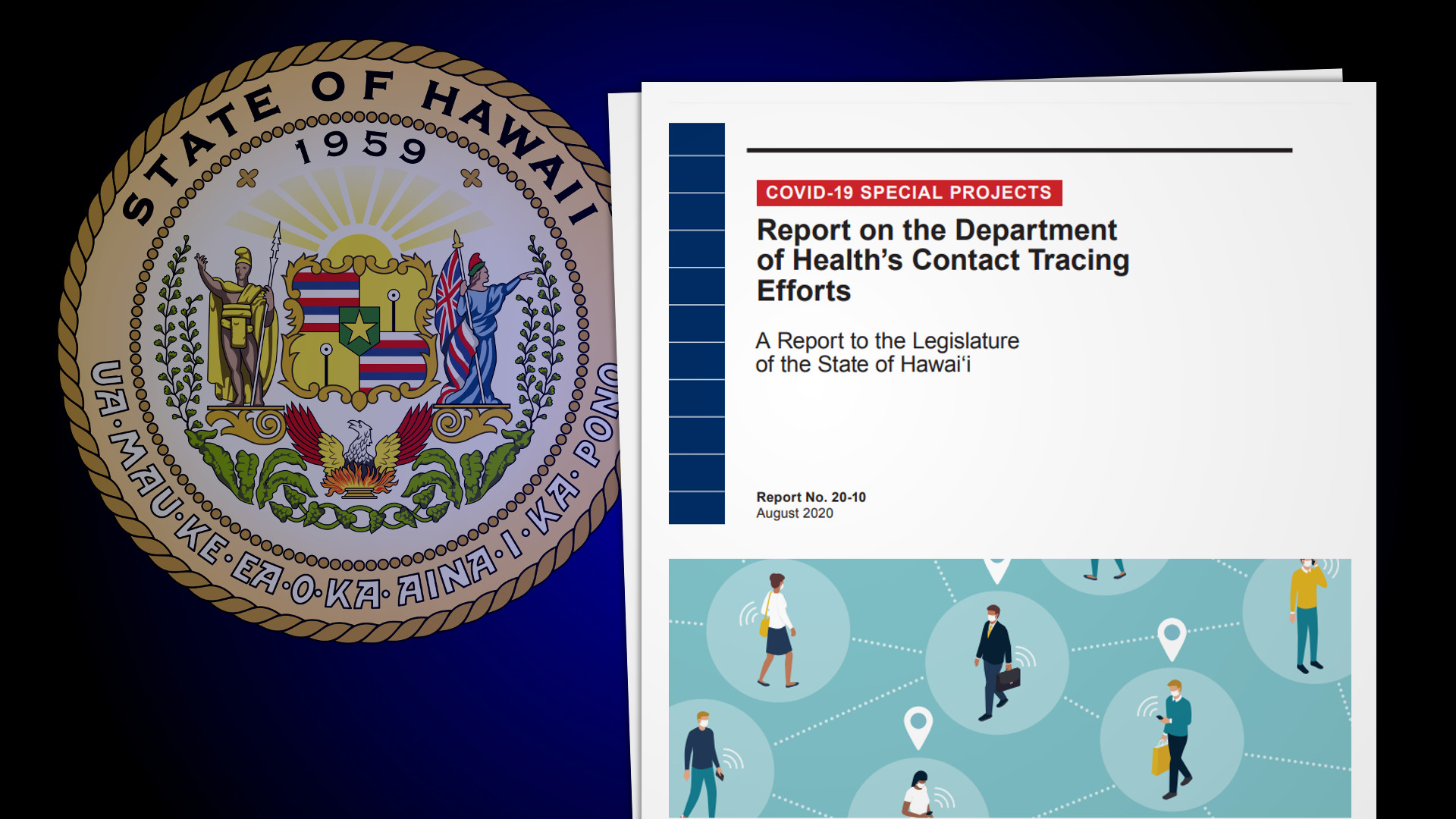 Auditor Slams State For Lack Of Transparency On Contact Tracing

HAWAIʻI - The auditor criticized the health department and the Ige administration for the lack of cooperation it received, calling it "frankly, inexcusable." 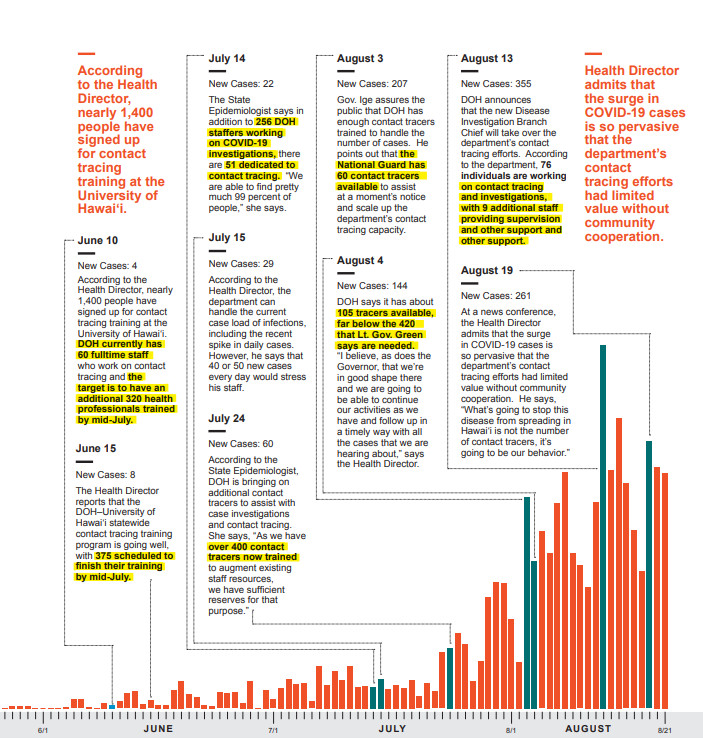 (Timeline of positive COVID-19 cases and the Department of Health’s response. Figures from Hawaii Data Collaborative via the COVID-19 Report No. 20-10 / August 2020)

(BIVN) – The Hawai’i State Auditor said that public confidence in the Hawai’i Department of Health has been eroded, after requests for information and documents went unfulfilled while attempting to complete a report on State DOH contact tracing procedures.

“In its simplest form, contact tracing is reaching out to the people who are infected, as well as contacting people they have had contact with, in an effort to isolate and suppress the disease,” the report reads.

Hawaiʻi had success in suppressing the spread of the virus at the start of the global pandemic, but by the end of July, the cases began to rise. Both the public and state lawmakers had difficulty in ascertaining the actual number of DOH staff doing contact tracing. At one point, DOH was accused of lying to the public about the true scope of its efforts.

The auditor set out to get the facts, but encountered a lack of cooperation.

“We recognize that the Department of Health had myriad responsibilities when it did not respond to our request for information on its contact tracing efforts; however, it is precisely during times of crisis when the public needs and deserves clear, concise, and transparent communication from its government,” State Auditor Leslie Kondo commented in the “Report on the Department of Health’s Contact Tracing Efforts”. Kondo wrote:

As Hawai‘i has watched its total number of COVID-19 cases more than double since the end of July, a growing sense of urgency has intensified scrutiny of the Department of Health’s (DOH) contact tracing program. Leadership of the department’s contact tracing efforts has been heavily criticized by the public and government officials, including the Lieutenant Governor and a member of the Hawai‘i Congressional delegation.

We intended to report on DOH’s contact tracing process, primarily to filter through the varying, confusing, and often conflicting information and to provide a clearer, objective, and up-to-date understanding of the department’s efforts. However, instead of cooperation and assistance, we encountered barriers, delays, and ultimately were denied access to those responsible for leading the department’s contact tracing: the Disease Outbreak Control Division (DOCD) Chief and the Disease Investigation Branch (DIB) Chief, who recently took over that task. While the Health Director spoke with us, failing to respond to numerous requests until a few hours before the interview, he repeatedly directed us to speak with the DOCD Chief for answers to specific questions about the department’s contact tracing process. At the end of our discussion, the Director said he would ask the DOCD Chief to talk to us and would provide us with documents we had requested in multiple letters to him, including the department’s policies and procedures relating to contact tracing. However, the DOCD Chief did not contact us, and the Health Director did not provide the requested documents.

While we understand DOH staff are busy, especially those working to improve the department’s contact tracing approach, we expected the department’s full and timely cooperation. We did not expect the Attorney General or the Governor’s office to involve themselves in our attempt to report about DOH’s approach to contact tracing. We are not a political office. We are an office established by the State Constitution to provide objective, unbiased assessments of government operations. We can only do our job with unimpeded and complete access to an agency’s program. Now, more than ever, DOH must be transparent and accountable. The lack of cooperation we received is, frankly, inexcusable. Public confidence in the department, specifically in its ability to perform timely contact tracing of the growing number of positive cases, has been eroded. The community now has many questions about the process that DOH has, for months, represented as under control. For DOH to effectively protect public health and reduce the spread of the novel coronavirus so we can begin re-starting our economy, it is critical the department rebuild public trust. This health emergency demands DOH ensure that its response is transparent by providing the public with complete, timely, and accurate information.

We hope the department will fully and promptly cooperate with future requests.

The report says that the health department has provided minimal data on its contact tracing effort, and a recent update of DOH’s contact tracing dashboard features even less data than the previous one. This figure shows a side-by-side comparison of the dashboard update. 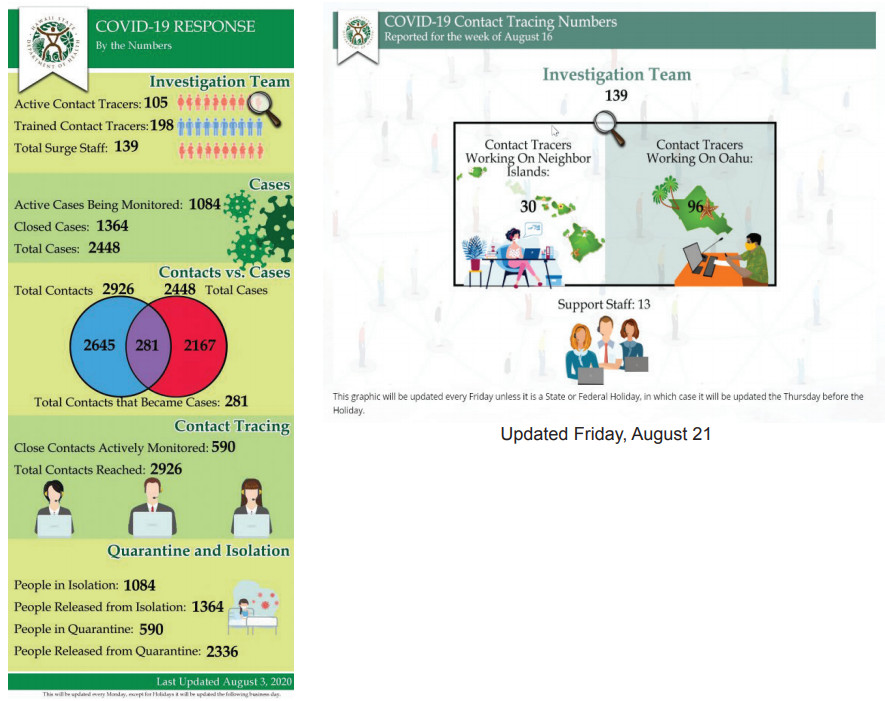 The report notes how Hawaiʻi went “from first to worst”, in that Hawai‘i had the lowest number of COVID-19 cases per capita of any state in the nation, but “now the virus is spreading at a faster rate than anywhere else in the nation,” and members of the United State Congress want to know what happened.

The report notes that the National Association of County and City Health Officials (NACCHO) Contact Tracing Workforce Estimator recommends 15 professionals doing contact tracing activities per 100,000 population under non-emergency situations. However, given the magnitude of the COVID-19 pandemic, NACCHO estimates that twice as many professionals will be needed, 30 professionals per 100,000 population. That means Hawaiʻi, with its population of 1.4 million, would need around 420 contact tracers. The report says DOH staffing falls short. “Since DOH officials did not respond to our request for information, we were unable to determine if DOH used an estimator or followed any other guidance to calculate the number of sufficient contact tracers for Hawai‘i and, if they did, what factors they included in their calculations,” the report stated.