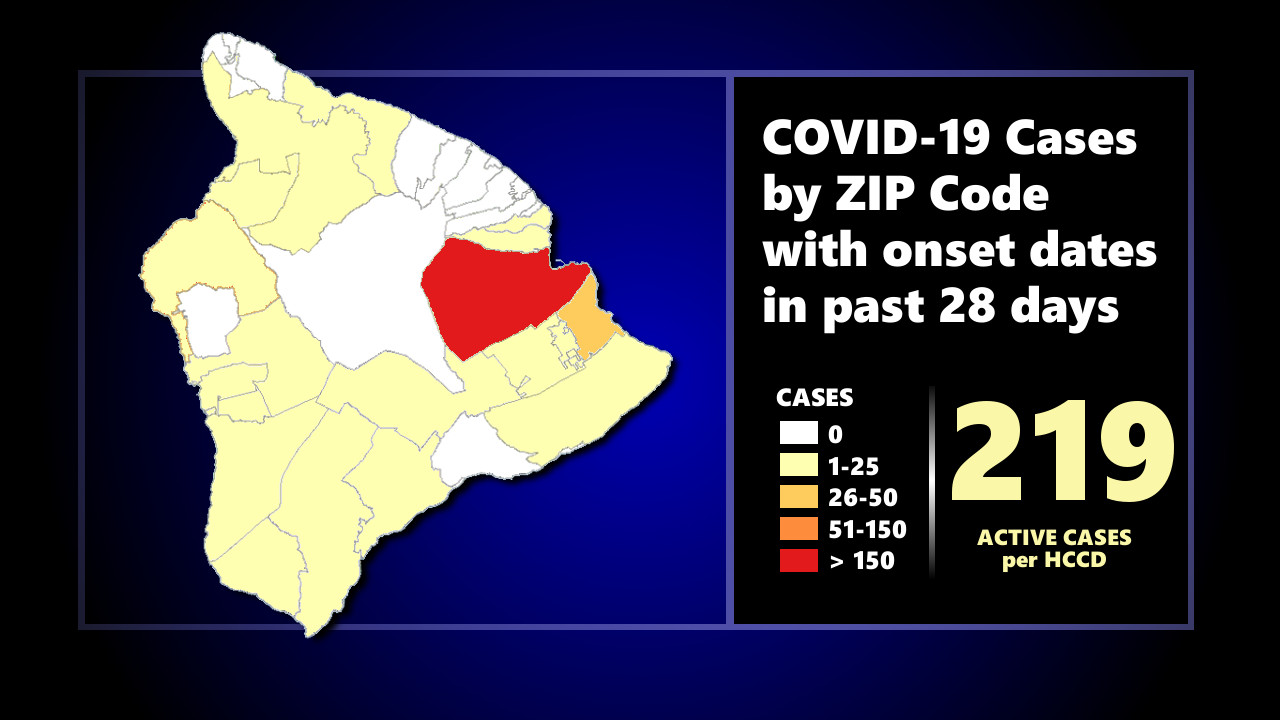 BIVN graphic features the number of “active” cases as indicated by Hawaiʻi County Civil Defense on Thursday morning, and a map showing zip code areas with reported cases having onset dates in the past 28 days according to the Hawaiʻi health department.

(BIVN) – Mayor Harry Kim read Thursday morning’s civil defense radio message, and said that another message will be issued after noon when the Hawaiʻi health department updates the statewide numbers.

We need everybody to be responsible and follow the preventive policies of face coverings, distancing, and gatherings. With your help, we can stop the spread of the virus to keep your family, friends, and neighbors safe.

Congresswoman Tulsi Gabbard’s telephone town hall held on Wednesday was a chance for experts to weigh-in on the situation.

“One of the very concerning things about the Big Island is if you look at the doubling, I mean, we’re actually seeing some day-after-day where the number of positive cases are doubling, and that’s very concerning,” said Dr. Scott Miscovich, the emergency medicine doctor who has been at the forefront of testing efforts across the state. “The percent positivity which is always something that we are concerned about, which is the percentage of tests that you take and then what percentage of those are positive, is also increasing significantly.”

“When it comes to trying to determine what the future looks like, that also is a indication of the fact that you are not testing enough,” Dr. Miscovich said. “When you see a percent positivity going up that rapidly, then you know that there are that many more people that are positive and then you you know you have to expand your testing.”

Hilo Medical Center on Wednesday reported another death in connection with the cluster at the Yukio Okutsu State Veterans Home in Hilo. There have been 4 total deaths related to COVID-19 at the facility with significant, underlying health issues. A total of 46 residents and 12 employees have tested positive for COVID-19 at the veterans home.

“We all saw where we were on Oʻahu six weeks ago,” Dr. Miscovich said. “When the Congresswoman [Gabbard] and myself and other people were sounding the alarm that it was time to shut the state down and we were calling for change in leadership, we are now basically on the precipice of that position now on the Big Island to stop it.”

“I’ve been personally talking to Mayor Kim probably for the last 10 days and he has asked us as Premier [Medical Group] to go ahead and to significantly increase the number of strike teams we have, and he essentially wants to have two sets of teams going, 7 days a week throughout the Big Island,” Dr. Miscovich said. “I’m working right through the mayor himself, right through his managing director, the emergency services, and I’m going to give a huge shout out to the new University of Washington Physician Assistants Program, all the PAs are over there, and they are going to be mobilized as essential health care workers. We’re going to have 16 well-trained medical people that are going to join our strike teams, beginning training tomorrow. We’ll be testing the following day, plus we have another 12 people with our Premier Group that are testing. So we’re going to have 30 strike team members that will be managing two to three teams, and we’re going to hit every corner of the Big Island, 7 days a week.”

“The mayor has just said it’s time to move, he’s going to use CARES Act money to make sure it is being done the right way, and I’m very pleased to be working with him and honored,” Dr. Miscovich said. “I think the people on the Big Island should be looking for, now, very broad access to testing and as we’ve started out. We said that’s the way we do it. We need the Big Island to be tested, we need people to be identified. If we do this well in the next two to three weeks, we are going to be able to identify people and start to turn that curve.”