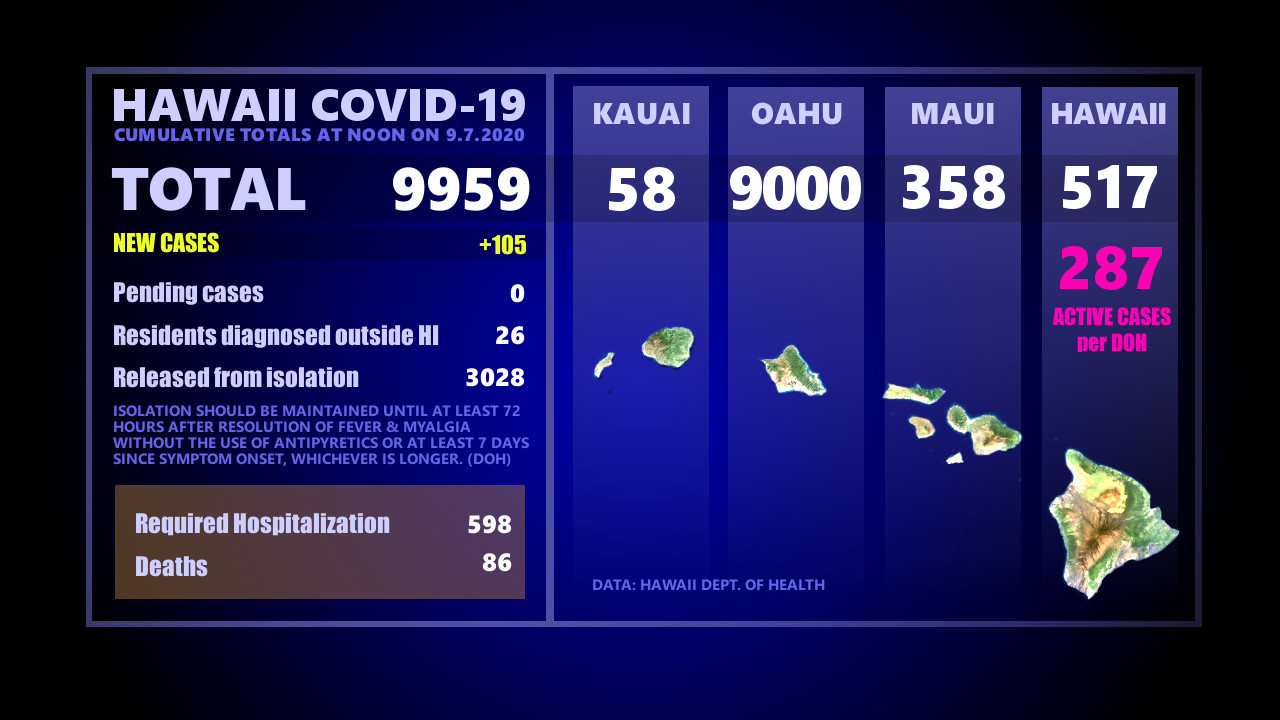 HAWAIʻI - The State of Hawaiʻi reported 105 new cases of COVID-19 statewide at noon on Labor Day. Both the County and the State reported one new death.

(BIVN) – The State of Hawaiʻi reportedly a relatively lower number of new COVID-19 cases at noon on Monday, with 105 cases identified statewide. The State also reported one (1) new death.

There were 11 newly reported cases on Hawaiʻi island. Of the 517 total cases, 227 have been released from isolation, and considering the State is reporting three (3) deaths on the Big Island since the pandemic began, the number of active cases is calculated to be 287.

As we have reported previously, the County of Hawaiʻi death count differs from what the State is reporting. The County says there have been a total of eight (8) deaths, all in connection with the outbreak at the Yukio Okutsu Veterans Home in Hilo.

“Our sadness, our respect, our condolences and appreciation goes out to their families,” a civil defense message stated.

Increased testing will continue throughout the Island and in the past two weeks testing has been increased by four times. Between the dates of September 2nd and September 5th, the County of Hawaii has sponsored 2 tests in Keaʻau, 2 in Pahoa, and 1 in Miloliʻi. A warm thank you to the Miloliʻi community for helping County task force members in your community. Remember the purpose of testing is to identify positive cases as early as possible and in this way help stop the spread of the virus and to provide early treatment. Mahalo for your participation.

The Hawaiʻi State Judiciary issued this news release on Monday:

In response to updated guidance from the Department of Health, Kona District Court traffic, criminal, small claims, and regular claims cases will be postponed until after Sept. 14 due to courtroom staff being directed to self-quarantine. The only exceptions are temporary restraining order cases, preliminary hearings, and any emergency matters, which will be heard as scheduled in Courtroom 2C​. The custody cases will be heard in Hilo.

The Keahuolu Courthouse will be open for Family Court and Circuit Court matters, as well as general court services.

Late last Thursday, a Keahuolu Courthouse employee received a positive COVID-19 test result and the Kona District Courtroom has been closed since Friday.

Individuals with cases needing to be rescheduled are being notified. In addition, staff will be stationed outside the courthouse on Tuesday to assist those with District Court matters.

“We sincerely apologize to anyone who is inconvenienced,” said Third Circuit Chief Judge Robert D. Kim. “Unfortunately, our staffing limitations preclude us from conducting the vast majority of District Court cases while the core staff is on self-quarantine at home. We thank those who had cases scheduled for their patience and understanding during these challenging times.

“Our thoughts are with our staff members and we look forward to welcoming them back on Sept. 15.”