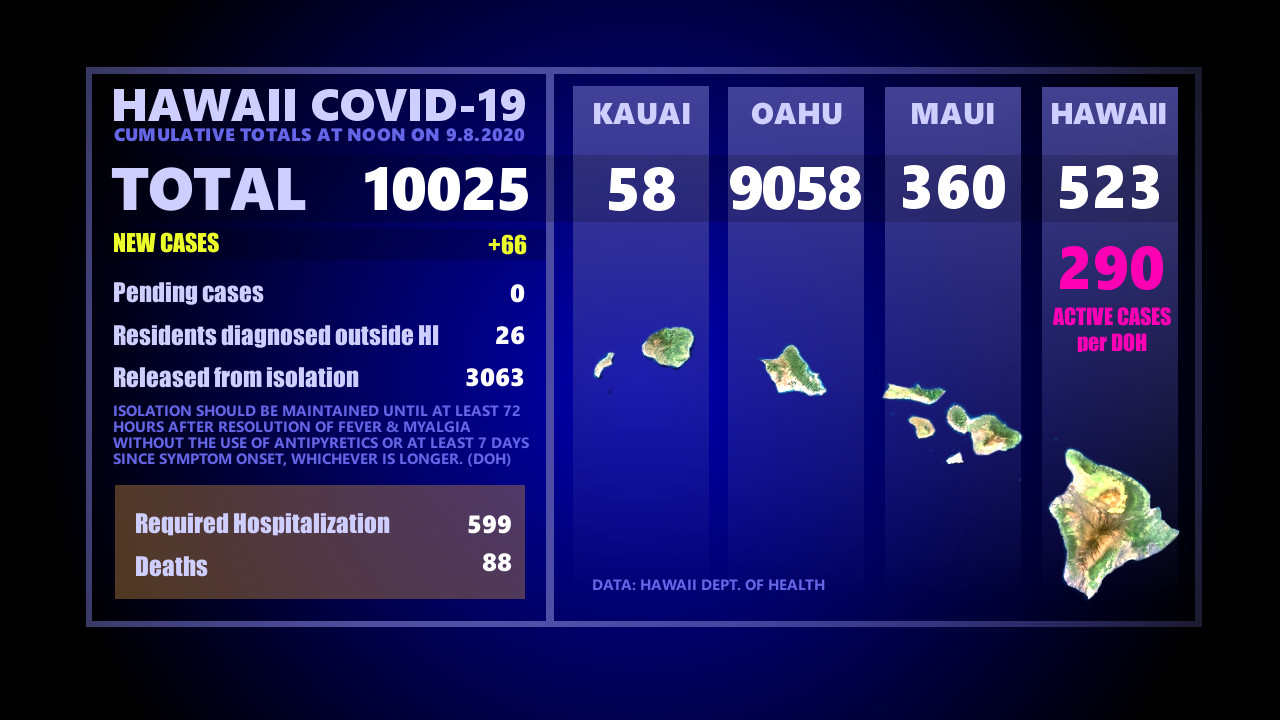 HAWAIʻI - There were two (2) new deaths reported on Tuesday, and six (6) new cases of coronavirus on Hawaiʻi island.

(BIVN) – There are now about 290 active cases of COVID-19 on Hawaiʻi island, according to the calculation that can be made from the Hawaiʻi health department data, updated at noon. Today, the State of Hawaiʻi surpassed the 10 thousand-case mark with 66 newly reported cases statewide.

Two (2) more deaths were also reported today, bringing the COVID-related death toll to 88. However, the State of Hawaiʻi continues to report only three (3) deaths with COVID-19 on Hawaiʻi island, while the County of Hawaiʻi and Hilo Medical Center report there have been nine (9) deaths, all linked to the outbreak at the Yukio Okutsu Veterans Home in Hilo.

UPDATE – (4:40 p.m.) – The Hawaiʻi Department of Health said there were far fewer tests over the holiday weekend, which may have resulted in the lower number of new cases. The health department said:

Following the holiday weekend, case numbers are notably lower today with 66 new cases and two additional COVID-19 deaths reported. One O‘ahu resident, a man in the 60 to 69-year-old age group, along with a woman on Maui, older than 80, are the latest victims to pass away from COVID-19. Both had been hospitalized, and one was a nursing home resident. No surge test results were reported.

UPDATE – (4:45 p.m.) – Governor David Ige today announced that he has approved an extension of the stay-at-home order for O‘ahu, with modifications. From the State of Hawaiʻi:

Gov. David Ige has approved another two-week extension of the “State-at-Home, Work-at-Home” order for the City and County of Honolulu, which will now end Sept. 24. In a news briefing today, Gov. Ige said, “We have seen a flattening in the number of new cases … but we are still not where we need to be. I do know that the mandates have been a significant burden on all of us. We have all made sacrifices over the weeks and months since the COVID pandemic started.” The order does make an exception for allow solo activity on beaches, hiking trails, and in parks.