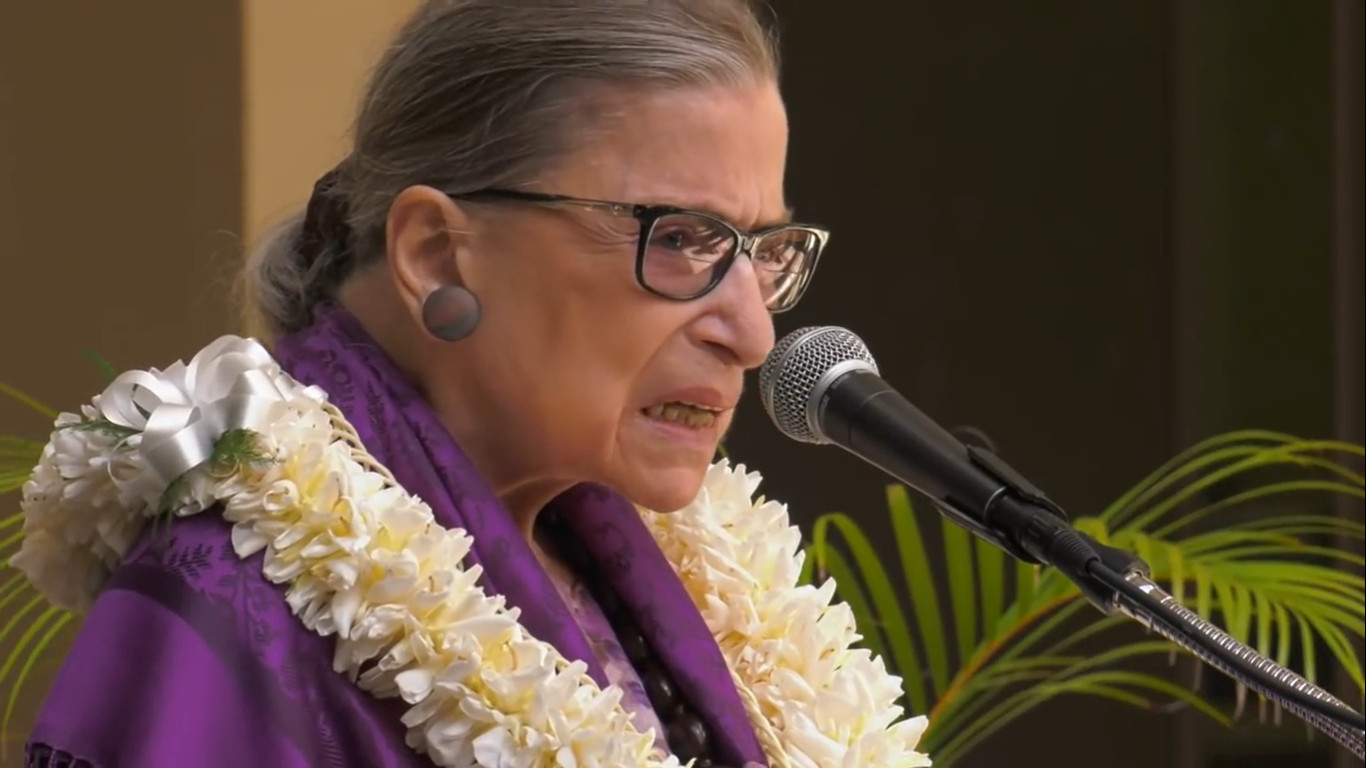 image of Supreme Court Associate Justice Ruth Bader Ginsburg from February 2017, when she was in Hawaiʻi, from video by the University of Hawaiʻi

WASHINGTON D.C. - Upon hearing the news of Justice Ginsburg's passing, top Hawaiʻi remembered her as a giant in advocating for justice and equity, and recalled her visits to Hawaiʻi in previous years.

(BIVN) – The U.S. Supreme Court announced today that Associate Justice Ruth Bader Ginsburg died this evening surrounded by her family at her home in Washington, D.C., due to complications of metastatic pancreas cancer. She was 87 years old.

“Our Nation has lost a jurist of historic stature,” said Chief Justice John G. Roberts, Jr. “We at the Supreme Court have lost a cherished colleague. Today we mourn, but with confidence that future generations will remember Ruth Bader Ginsburg as we knew her — a tireless and resolute champion of justice.”

Justice Ginsburg was in Hawaiʻi in February 2017, and spoke to students and faculty at the University of Hawaiʻi at Mānoa, “providing a rare educational opportunity for the university’s law students”. Ginsburg was taking part in the U.S. Supreme Court Jurist-in-Residence program at the William S. Richardson School of Law.

As a mark of respect for the late Justice Ginsburg, Hawaiʻi Governor David Ige has ordered that the flags of the United States and State of Hawai‘i shall be flown at half-staff from now until the date of Ginsburg’s interment. The date of the interment has yet to be determined, however the Supreme Court has announced that it will be a private service and will be held at Arlington National Cemetery.

“Ruth Bader Ginsburg was a giant in advocating for justice and equity,” said Governor Ige. “Justice Ginsburg visited Hawaiʻi several times, and it was clear that her values were closely aligned with those of our community. Dawn and I celebrate her work and life and mourn her loss.”

“It is with great sadness that I learned of the passing of Justice Ruth Bader Ginsburg today,” said Hawaiʻi Supreme Court Chief Justice Mark E. Recktenwald. “Justice Ginsburg was a legal giant: a brilliant jurist who tirelessly worked to ensure that our nation’s promise of justice for all was kept. She was also a courageous and inspirational role model, both professionally and personally. We were honored to have her visit the Hawaii Supreme Court on several occasions. Most recently, she visited our court in 2017, when she met with the justices and members of the bar, and then graciously spoke about her experiences and her love of Hawaii with law clerks and staff attorneys. On behalf of the Hawaii Judiciary, we send our deepest sympathy and fond aloha to her family.”

U.S. Senator Brian Schatz (D-Hawaiʻi) also commented on Ginsburg’s passing, saying that the Associate Justice was a brilliant jurist. “In devoting her life to advancing equality and justice for all, she made our country a better place and blazed a trail for women in civic life,” Sen. Schatz said. “She leaves behind a powerful and enduring legacy that we must fight to protect. May she rest in peace.”

“We must respect her final wish and wait to confirm her replacement until a new president is sworn in,” Schatz added, talking about the debate that is to come. “Just like Mitch McConnell and his Republican colleagues said in 2016, the American people deserve a say in their next Supreme Court justice.”

Senate Majority Leader McConnell has already revealed his intention, saying President Trump’s nominee to fill the now-vacant seat “will receive a vote on the floor of the United States Senate.”

“In the last midterm election before Justice Scalia’s death in 2016, Americans elected a Republican Senate majority because we pledged to check and balance the last days of a lame-duck president’s second term,” McConnell wrote. “We kept our promise. Since the 1880s, no Senate has confirmed an opposite-party president’s Supreme Court nominee in a presidential election year. By contrast, Americans reelected our majority in 2016 and expanded it in 2018 because we pledged to work with President Trump and support his agenda, particularly his outstanding appointments to the federal judiciary. Once again, we will keep our promise.”

Sen. McConnell also remembered Justice Ginsburg for her service, saying that “her intelligence and determination earned her respect and admiration throughout the legal world, and indeed throughout the entire nation, which now grieves alongside her family, friends, and colleagues.”

According to the U.S. Supreme Court:

Justice Ginsburg was born in Brooklyn, New York, March 15, 1933. She married Martin D. Ginsburg in 1954. She received her B.A. from Cornell University, attended Harvard Law School, and received her LL.B. from Columbia Law School. She served as a law clerk to the Honorable Edmund L. Palmieri, Judge of the United States District Court for the Southern District of New York, from 1959–1961. From 1961–1963, she was a research associate and then associate director of the Columbia Law School Project on International Procedure. She was a Professor of Law at Rutgers University School of Law from 1963–1972, and Columbia Law School from 1972–1980, and a fellow at the Center for Advanced Study in the Behavioral Sciences in Stanford, California from 1977–1978. In 1971, she was instrumental in launching the Women’s Rights Project of the American Civil Liberties Union, and served as the ACLU’s General Counsel from 1973–1980, and on the National Board of Directors from 1974–1980. She was appointed a Judge of the United States Court of Appeals for the District of Columbia Circuit in 1980. During her more than 40 years as a Judge and a Justice, she was served by 159 law clerks.