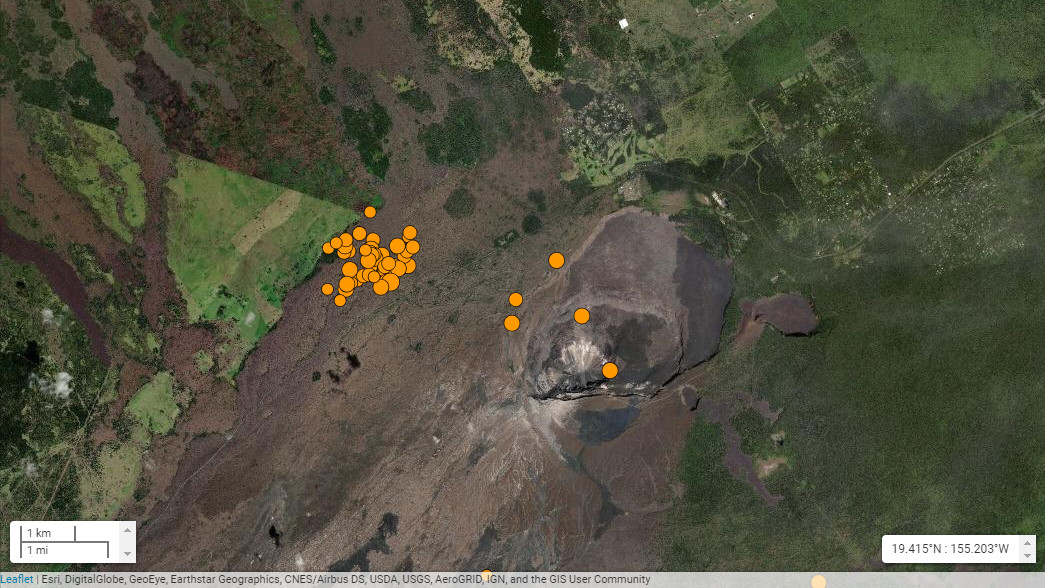 (BIVN) – The earthquake swarm near the summit of Kīlauea volcano continued Saturday morning.

The location of the shallow seismicity is beneath the northeastern tip of the Ka‘ōiki fault system, about 1 mile west of Nāmakanipaio Campground, on the north side of Highway 11 within the boundary of Hawaiʻi Volcanoes National Park.

Yesterday, scientists said the earthquakes are occurring in a cluster about 1 mile wide and 1 to 3 miles below the surface.

The largest of the earthquakes to occur in the swarm was a Magnitude 3.5 that rumbled at 5:08 a.m. this morning.

Kīlauea is not erupting. The USGS Hawaiian Volcano Observatory says the alert level remains at GREEN/NORMAL, and stated that there is no significant hazard from the shallow earthquakes.

“Clustering of shallow earthquakes in this region does not mean an eruption is imminent,” USGS HVO said in an information statement released on Friday. “HVO has recorded shallow earthquakes in this area for many decades across several eruptive cycles at both Kīlauea and Mauna Loa. Other monitoring data streams for Kīlauea and Mauna Loa, including ground deformation, gas, and imagery, show no signs of increased activity.”

The information statement referenced a Volcano Watch article from 2012, Why do swarms of earthquakes occur around the Ka‘ōiki Pali? From the article:

Ka‘ōiki Pali is one of a series of subparallel faults that extends from the area west of the Nāmakanipaio Campground all the way to Honu‘apo. These faults, which form the Ka‘ōiki-Honu‘apo fault system, were probably created by subsidence of Mauna Loa’s southeast flank before Kīlauea was built against (or on) it. You can see the surface expression of these faults in the stepped terrain just mauka of Highway 11 between Kīlauea’s summit and Pāhala.

But the fact that the steps are draped by an unbroken 9,000 year-old lava flow shows that, if these faults are still active at depth, their movements are too minor to result in a surface rupture despite the earthquakes centered there. This is reaffirmed in 2012 by the lack of any shift of the ground surface in response to the recent earthquakes.

The entire southeast flank of Mauna Loa frequently hosts earthquakes in response to being squeezed and stretched between two very active volcanoes. HVO records show four damaging earthquakes in this area between 1941 and 1983, but none since. Earthquakes in 1974 and 1983 are believed to have enabled Mauna Loa’s eruptions in 1975 and 1984.

The faults and cracks in the area between Mauna Loa and Kīlauea tell multiple stories about the sense of movement. First, the fault system itself is made of “normal faults,” suggesting a downward motion of the southeastern (Kīlauea) sides of each fault, relative to its northwestern (Mauna Loa) side during subsidence. They are analogous to the Hilina and Hōlei Pali on Kīlauea’s south flank. Farther up Mauna Loa, near the epicenters of the 1974 and 1983 earthquakes, the ground surface is cracked in a “strike slip” manner, suggesting differential sideways movement of the surface parallel to the Ka‘ōiki Pali. Even though strike-slip and normal faulting are evident at the surface, the pattern of ground shaking during the largest earthquakes suggests that they started with another mechanism—deep slippage at the base of Mauna Loa, where it rests on the old ocean floor.

Faults on the south part of the Island of Hawai‘i are subject to forces arising from the movement of magma and forces arising from gravitational breakdown of its volcanoes. The earthquake swarms on the Ka‘ōiki Pali are probably not directly connected with subsurface magma movement but may be linked to changes in pressure within Kīlauea’s magma system.