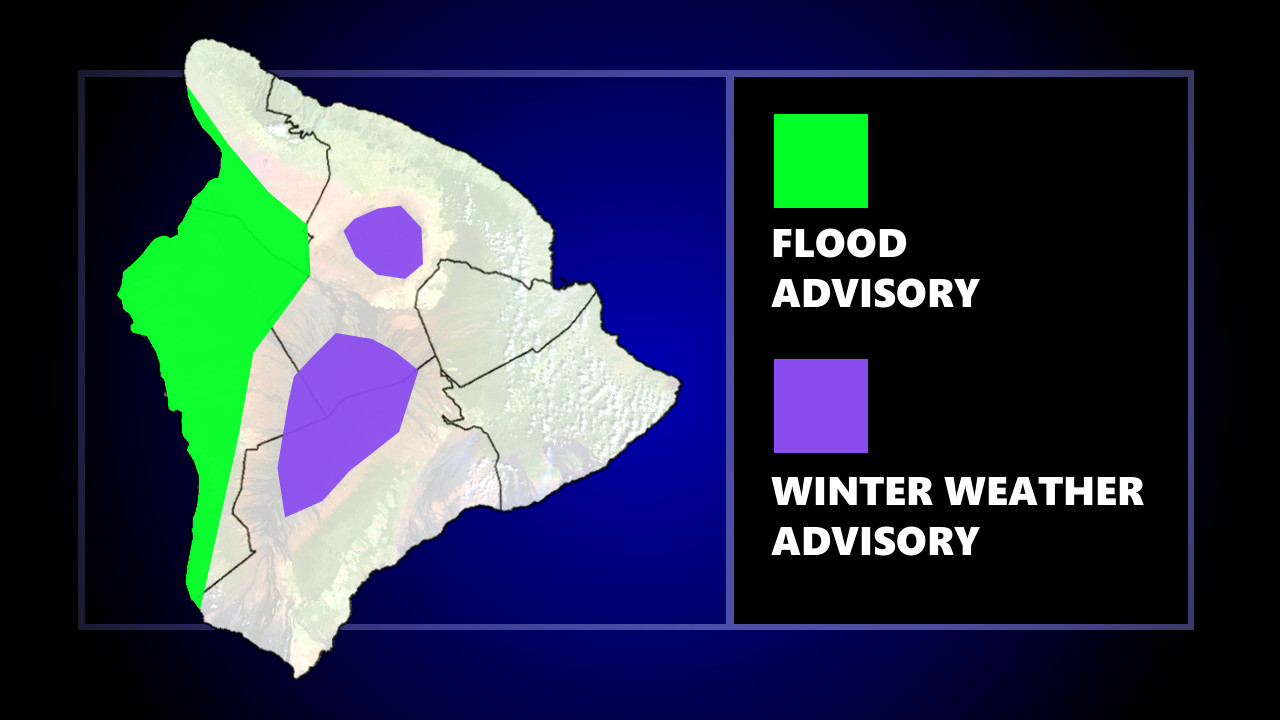 HAWAIʻI ISLAND - South Kohala, as well as North and South Kona, were under a Flood Advisory on Tuesday evening, officials say.

(BIVN) – The National Weather Service in Honolulu has issued a Flood Advisory for a portion of Hawaiʻi island until 6:45 p.m. Tuesday evening, and a Winter Weather Advisory for mountain summits until 6 a.m. Wednesday.

The Flood Advisory was issued for South Kohala as well as North and South Kona. According to weather forecasters:

At 3:40 p.m. HST, radar indicated heavy showers over leeward Big Island, with the heaviest rainfall occurring around Kailua-Kona and north to Puuanahulu. Rain was falling at a rate of 1 to 2 inches per hour.

Hawaiʻi County Civil Defense produced this radio message after the advisory was issued:

A Flood Advisory is issued when flooding problems, such as flooding in low-lying areas and areas of poor drainage, as well as minor flooding of streets and roadways are possible.

Due to the Flood Advisory, the following are issued:

Stay away from flood prone areas.

Do not cross fast flowing water in your vehicle or on foot. Turn around don’t drown.

Heavy Rainfall and ponding will cause hazardous driving conditions.

Remember, if lightning does threaten your area, the safest place to be is indoors.

You will be notified of any changes that may affect your safety.

Meanwhile, a mix of rain and snow with snow accumulations of around one inch is possible on the summit areas of Maunakea and Mauna Loa.

Forecasters issued the Winter Weather Advisory because periods of snow, sleet, or freezing rain may cause travel difficulties. “Be prepared for slippery roads and limited visibilities and use caution while driving,” the National Weather Service said.